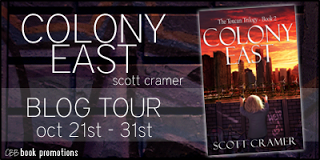 When the bacteria that killed most of world's adults undergo a deadly mutation, 15-year old Abby must make the journey to Colony East, an enclave of scientists caring for a small group of children for reasons unknown. She fears that time is running short for the victims, but she's soon to learn that time is running out for everyone outside Colony East.

This is the second book in the Toucan series. 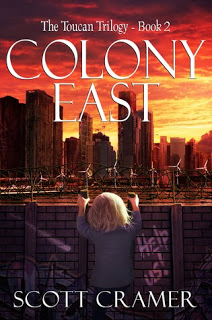 In the first book, Night of the Purple Moon, a comet passes close to Earth and turns the sky purple.  All around the world people watch in awe.  Abby and her siblings go to bed happy that night thrilled that they got to stay up and see it.  When they wake up in the morning their lives are changed forever when they find that their parents are dead and most of the world's adult population have died as well.  The comet apparently brought a bacteria with it, killing all adults who were not in containment.

Colony East begins over a year after the Night of the Purple Moon.  Kids all over the world are learning to be self sufficient.  They are the doctors, traders, and farmers of their communities.  The rules of the world are different now and food, fuel, and medical kits are in short supply.

Things seem to be getting back to the new normal until the original virus begins mutating.  The new mutated virus, called Pig, causes children to steal food and engorge themselves.  They end up dying from fevers or from fighting with the other children.  Abby doesn't seem too worried until her little sister, Toucan, begins showing symptoms of Pig.

With no known cure, Abby fears this could be the end of Toucan.  She thinks her only hope of saving her is to go to Colony East, an enclosed camp where some of the only living adults in the world are training the doctors and soldiers of the future.  The only problem is there's no way into the Colony.  The adults have blown up the bridges and armed guards are on patrol.

Will Abby get Toucan into Colony East before it's too late?  What price will she pay to save her little sister?

This is an awesome second book in the series.  It picks up where the first book left off and we get a good look at what has happened in the world.  We see how the children are creating their own societies and how the adults are grooming the next generation.  There's also something weird going on with the adults but no one seems too concerned until the end.

I can't wait to read the conclusion of this trilogy!