Last weekend we were invited to a friends house for a bar-b-que.  I was asked to bring a dessert with fruit in it.  I had a hard time deciding what to bring but after searching my cupboards I found I had all the ingredients to make a strawberry trifle.  I've never made a trifle before but it seemed simple enough. 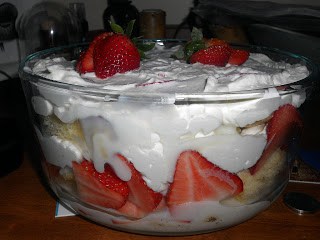 I didn't have time to make a full cake so I made a cupcake recipe and cut them into cubes.  I then made a white chocolate pudding to pour over top of the cake and finished it off with homemade whipped cream.  For all the components that went into making the trifle I was surprised how easy it was and how quickly it came together. 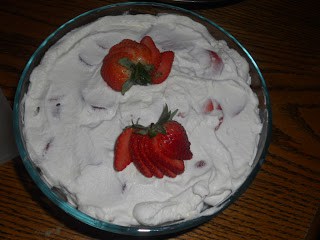 The trifle ended up tasting amazing.  The vanilla cake was lightly marinated with the white chocolate pudding but it wasn't too soggy.  The strawberries were soaking into the cake and the slightly sweetened whipped cream was the perfect topping.  It was a fresh and summery dessert that is perfect to take to a cookout. 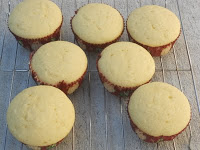 2.  In a bowl cream the butter and sugar.  Add in the egg and egg white and beat well.  Stir in the vanilla extract.

3.  In a small mixing bowl combine the flour, baking powder, and salt.  Add half the flour mixture to the sugar mixture and mix well.  Add in the milk and stir.  Then add in the remaining flour and mix for 2 minutes.

4.  Pour the batter into the muffin cups filling them ⅔ of the way full.  Cook for 18-20 minutes or until a toothpick comes out clean.  Let them cool on a wire rack for 20 minutes then cut all 6 cupcakes into 1 inch pieces and set aside.

2.  Melt the white chocolate and then stir it into the milk mixture.  Continue cooking over medium heat until the pudding thickens enough to coat the back of a spoon.  Remove from heat and stir in the vanilla. Pour into a bowl and refrigerate at least an hour. 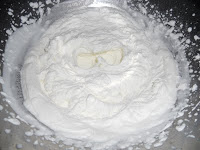 1 t. vanilla
2 T. powdered sugar
1.  In a large bowl use a hand mixer and beat the cream until stiff peaks form.  Add in the vanilla and powdered sugar and mix an additional minute.  Do not over beat.  Refrigerate until ready to serve. 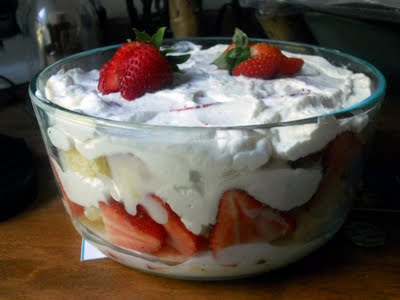