61 shares
I have never had Jiffy cornbread.  I've seen the box in the market hundreds of times but I've never picked it up.  I like cornbread ok, but it's not something I'd just make for myself.  I usually only have it if I'm out at a restaurant.  So, when I saw a recipe for stuffed pork that used Jiffy cornbread I thought, why not?
The recipe starts out by making the cornbread then crumbling it.  I had a little taste of it before I crumbled it.  It was actually pretty good.  I might pick up a box next time I make chili.  The combination of the cornbread, sauteed vegetables, and fresh apples made a tasty stuffing for the pork.  I had a little trouble stuffing and rolling the loin and then tying it up.  I'd suggest having help of a second person to tie the string while you hold the loin. 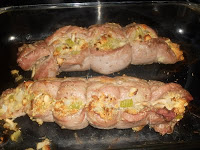 The pork came out moist and delicious.  The stuffing was slightly sweet and had soaked in the pork juice.  It was a great dish and would be something I could serve to company. 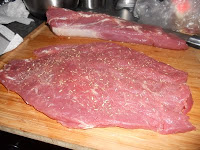 2 stalk celery, diced
1.  Cut the loin in half and lay flat.  Put a piece of plastic wrap over top of it and pound it until it's ¼ inch thick.  Sprinkle the loin on both sides with salt, pepper, and rosemary.
2.  Bake the Jiffy cornbread using the egg and light cream according to the directions on the box.  Crumble it and set aside.
3.  Preheat the oven to 450 degrees. 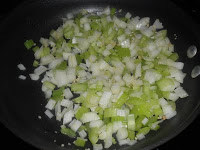 4.  In a small saute pan saute onion, celery, and garlic in a little olive oil for 3-4 minutes.  Remove from heat and add in apple.  Set aside.
5.  Spread the cornbread crumbles over top of the pork loin, leaving a ½ inch seam on each side.  Put the vegetable mix on top of it.  Roll up the pork loin and tie with string. 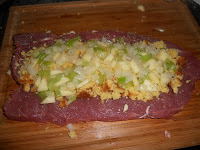 6.  Place the pork loin in a baking dish and bake at 450 for 15 minutes.  Lower temperature to 350 and continue cooking for 45 minutes.  Remove from oven and cut off string.
7.  Cut into ½ inch pieces and serve. 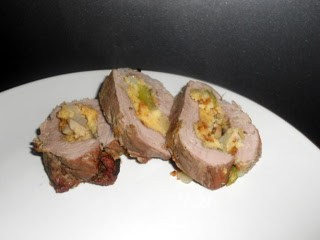