54 shares
I’ve been looking for a different way to cook our pork chops for dinner.  We’ve been tired of fried pork chops and breaded baked chops.  While flipping through my Cooking Light cookbook I ran into a recipe using tomatillos.  I’ve never used a tomatillo to cook with so I was definitely intrigued.  I searched 3 local grocery stores in search of tomatillos and ended up finding them at Wal-Mart.  They had 10 small ones left so I scooped them up.  At the cash register the woman looked at them and asked what in the world they were as she had never seen them before. 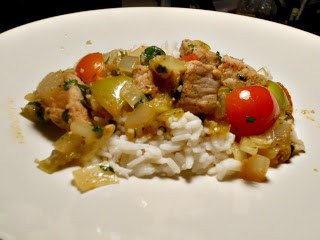 This pork dish had a great flavor to it.  The tomatoes and Vidalia onion added sweet notes to the dish while the red pepper and garlic added hints of spiciness.  The entire dish was light and refreshing.  I served it over rice which was the perfect compliment to this Mexican meal.

Tangy Pork with Tomatillos, Tomatoes, and Cilantro  (adapted from Cooking Light)
1 lb. pork chops, cut into 1 inch pieces
1 T. ground cumin
1 t. red pepper
½ t. salt
½ t. black pepper
1 T. olive oil
½ c. Vidalia onions, chopped
3 garlic cloves, minced
1 c. tomatillos, quartered
1 c. cherry tomatoes, halved
½ c. fresh cilantro, chopped
1.  In a small bowl combine cumin, red pepper, salt, and black pepper with the pork chops.  Toss to coat.
2.       In a large skillet heat half of the olive oil.  Add the pork chops and cook for 5 minutes or until pork is browned on all sides.  Remove to a bowl.
3.       Heat the remaining oil in the skillet.  Add onion and garlic.  Cook for 2 minutes.  Return the pork to the pan along with the tomatillos.  Cook for 10-15 minutes, stirring occasionally, or until pork is cooked through.

4.       Add tomatoes and cilantro to the skillet and heat an additional 2 minutes. 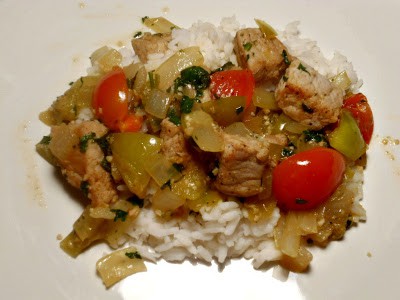