College student Christy Brewer lives in a personal hell at home with an increasingly unreasonable and violent father while balancing school and a love life. Meanwhile, over a hundred miles away, in a small ski resort town, Police Chief Wayne Marski is suddenly dealing with local people who are being dispatched in a particularly grisly manner. Worse, the few clues indicate that he is dealing with some sort of animal--or a human adversary.

Their stories coincide in a suspenseful and action-filled climax as a centuries-old curse comes home.  (-synopsis) 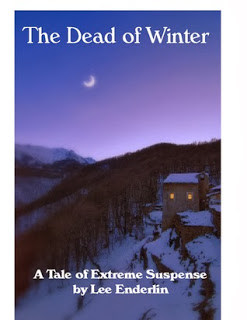 This novel parallels the lives of people in  two different towns and in two different time periods.  Christy has a scare in high school when her father has a heart attack.  Her mother, a nurse, is able to use CPR to bring him back but once he's back he is never the same.  He's angry, he's hateful, and he's becoming violent.

Fast foward four years and Christy is working at her summer job before the start of her senior year.  She meets Todd and the two become close.  When Christy goes back to school she wants to come home to see Todd but she doesn't want to be in her house.  Her father has become increasingly mean to both her and her mother.  Then she and Todd have a fight.  Christy and her mother decide the safest place to go for Christmas is their ski condo in New York.

Wayne Marski is the sole police office for 4 small towns in New York.  He finally gets a partner when things start to go wrong.  Bodies start turning up half eaten by something that isn't quite animal.  Then his partner turns up murdered in the same grisly way.  As the holidays draw closer Wayne isn't sure he can keep the town safe.

Back in the 1700's White Moon and her tribe were hunting for food in the time of famine.  While the men are out hunting the beardfaces come and slaughter everyone in the tribe except White Moon.  She receives a bullet wound in her arm but manages to survive.  She spends many nights trying to keep herself alive with no food or help in sight.  When she begins to get dizzy with hunger she does the only thing she can; she starts to eat one of the women killed in her tribe.  The next day the men of her tribe return and find out she is a windingo and bury her alive to save her soul.

But now White Moon is back in spirit...and she's hunting the beardfaces one at a time.  With the New Year coming Wayne, Christy, her dad, Todd, and White Moon will meet in a horrific bloodbath that will leave everyone changed forever.

This story had a lot of background to it.  There were a lot of characters that were at times hard to keep track of.  I had a difficult time with the Indian spirit eating the present day humans.  It was creepy but it was also bizarre.

The novel was well written and had several good story lines besides White Moon coming back for revenge.  The characters are well developed and the story had me peering over my shoulder while I was reading.  The evil lurking at Saugill Mountain was enough to scare anyone!