Seeing ghosts has plagued Dumdie Swartz since early childhood. Afraid that ghost guts might stick to her if she stepped through them, thirteen-year-old Dumdie Swartz still cringes when she encounters them. Her strange attempts to avoid spirits create a lonely life. Her sisters constantly mock her strange behavior, her parents are clueless, and her social life is zero.

Dumdie finds solace working in a shared garden with her elderly neighbor, Mr. Carson. When teens from her high school steal pumpkins from his garden, Mr. Carson is hurt during the theft, and later, dies. Dumdie’s life takes a dark turn. She learns there are stranger things than ghosts, when she senses something evil living in Kyle, one of the boys who had raided the pumpkin patch.

Kyle bullies Dumdie to scare her into silence. The more Kyle threatens her, the clearer she perceives the evil thing possessing him. Dumdie finds support in an unlikely group of girls who befriend her when she helps them with their costumes for the Pumpkin festival. During the festival, Dumdie’s fears explode when the thing possessing Kyle decides it wants to possess her. (-synopsis) 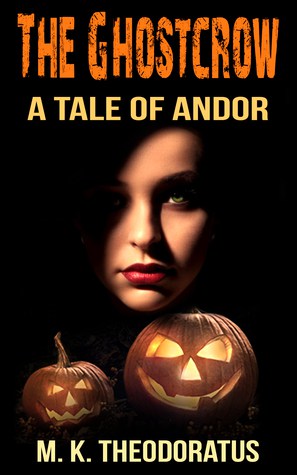 This short story or novella is about a teenage girl named Dolores Swartz who everyone calls Dumdie.   She sees ghosts and often acts irrationally in order to avoid walking through a ghost or seeing them.  She is terrified of the ghosts and it makes her looks awkward and crazy and times.  Her older sisters tease her and she doesn't have any friends.

Dumdie enjoys working in her shared garden with her neighbor.   But one day while working in the garden two boys from school come and try to steal pumpkins.  When her neighbor, Mr. Carson, dies while trying to stop the boys, Dumdie doesn't know what to do.  She wants to tell the police who hurt Mr. Carson but Kyle, the boy who did it, begins threatening her.

Kyle gets worse as the days go on.  He threatens her, he stalks her, and he makes her life miserable.  As Dumdie looks at him she realizes there is something more then just him standing there.  There is fire in his eyes and his face seems to shift as though something is possessing him.   Dumdie must find a way to stay alive and away from Kyle or she might be the next person it possesses.

I found this book to be just ok.  It was confusing at times as I didn't understand what was going on with Kyle at first and couldn't figure out why no one was helping Dumdie.  I found her sisters to be just plain rotten and it seemed as though her parents didn't even care.

Throughout the story I kept waiting for some background on why she sees ghosts or when it started but really there wasn't any.  It was simply that she saw ghosts.  There was some action in the book and I kept hoping Dumdie would finally make a friend or stand up to all the people that were mean to her.

Overall this book was average.   It was short so it didn't take long to read.  I didn't find that I was lost in the book or really cared about the characters.  They were all a little hollow for me.   I do think that people who enjoy supernatural books or young adults might enjoy this story.