The Light in the Shadows: a Memoir by Kira Bell

How does a forty-something recently divorced over-educated sexually naïve suburban mother of three find herself voluntarily tied to the bed of a near-stranger wielding a knife?
And liking it?

Kira’s memoir tells the true romance of her path to perversion—and love—as she balances single motherhood with dating. "The Light in the Shadows" is a real life example of how a normal every woman/every mom reader could find herself not just fantasizing about kink, but actually doing it.

At first Kira resists becoming emotionally attached to her BDSM mentor. As if kinky were not edgy enough, the man guiding her on this adventure is also polyamorous. As her physical journey takes her deeper into the shadows, her emotional journey proves no less perilous. Can she overcome jealousy as she learns to endure physical pain? Does she want to? Can she reconcile her feminism with submission? Her kinky desires with motherhood? As she becomes entangled in love, no less than in the bondage ropes, she is forced to question everything she thought she knew about relationships, and ultimately, about herself. (-synopsis) 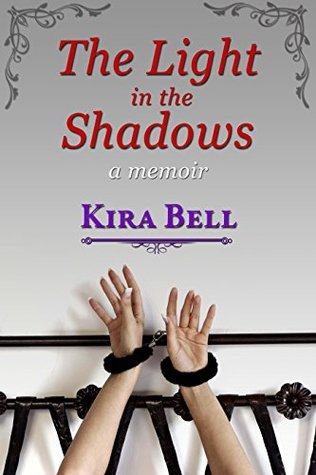 The book begins with Kira looking for something after her divorce.   She finds a man to date in her office but it isn't much of a romance.  They have drinks, they laugh, they have sex in the office.   But it was just office sex...that's not kinky is it?   That's the question Kira asks herself and rejects.

So begins her love of whips, bondage, and a polyamorous relationship.   Kira, the divorcee with children, is now a kinky woman.  Find out about all of her adventures in the bedroom in this sexy memoir.