In case you haven't been able to tell from my posts, I love to make cakes.  A few years ago I took the Wilton 1 and Wilton 2 cake decorating classes and I learned a lot.  Ever since I've enjoyed making cakes for my family members birthdays, parties at work, and even for a few friends.  I  enjoy making different combinations of cake flavors, frosting, and fillings. 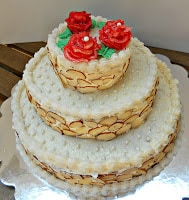 To date I have never made a wedding cake.  I'm way to terrified of making a cake with stackable layers.  A  wedding is one of the most important days in a person's life and there will always be pictures of the cake.  Not to say I haven't wanted to make a wedding cake, I was just to nervous to try.

Now, let's go back a few weeks to a typical Thursday night.  I had just gotten home from work and was getting ready to start dinner.  I received a phone call from a friend of mine telling me that she was eloping this weekend and she was wondering if I could make her a wedding cake.  She told me she just needed a small one, enough for 10 or so people.

I agreed thinking that a small wedding cake wouldn't be too bad and that I could bake the cakes that night and then go shopping for the toppings and decorate it Friday after work.  Then my friend said she was getting married the next day and that she would be picking up the cake before the wedding.

I was slightly panicked as I asked her to describe what she wanted.  I figured I had 7 hours to bake the cakes, cool the cake, frost the cakes, and then decorate them before I absolutely had to be in bed at midnight so I could wake up for work the next day.

After making a plan I checked my pantry.  Thankfully I keep baking supplies well stocked.  Also lucky for me was the fact that my mom had just purchased me some fancy edible glitter for my birthday which would look lovely on the cake.  The only thing I needed was sliced almonds so I called my husband, who was out, and he picked up a bag of them for me on his way home.

I got to work baking the cake.  I went with Dorie Greenspan's perfect party cake for my vanilla layers and then made a chocolate layer as well.  While they cooled I made a large batch of swiss meringue buttercream frosting.  The bride to be wanted a whipped frosting that wasn't too sweet so swiss meringue fit the bill.   I scooped a portion of it out to make the Nutella buttercream for the chocolate layer and then set the frosting aside.

Next I cut the layers to the appropriate sizes.  I used my glass bowls to guide me in my cutting.  I then sliced the layers in half with a serrated knife.  I filled the vanilla layers with the vanilla swiss meringue buttercream and the chocolate layer with Nutella buttercream.  Each layer was also filled with sliced almond.  They were then covered in buttercream and stacked on top of each other.  Then I hand placed each sliced almond on the sides of the cake.

Finally I made American buttercream to decorate the cake with.  I piped borders around the cake and dotted the tops with edible pearls.  I sprinkled everything with edible glitter.  Then I piped several red roses for the top.  I was quite impressed with the cake and was thrilled it came out so well.  The bride was really happy with it as well! 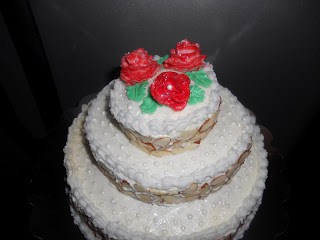 7.  Remove one third of the batter to a medium bowl.  Add the cocoa powder to the smaller portion of batter and mix well. 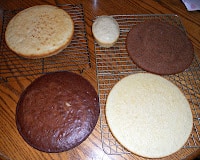 9.  Bake the cakes for 30-35 minutes or until the cakes are springy to the touch and a toothpick inserted into the center comes out clean.

10.  Allow the cakes to cool in their pans for 5 minutes before running a butter knife around the edges and unmolding them.  Remove the parchment paper from the bottoms and turn them right side up on a wire rack.  Allow to cool completely.

11.  Meanwhile, place the sugar and egg whites for the frosting in a large heatproof bowl and fit the bowl over a pan of simmering water.  Whisk constantly until it feels hot to the touch and the sugar is dissolved.  Remove the bowl from heat.

12.  Pour the sugar mixture into the bowl of a stand mixer and beat on medium speed for 5 minutes or until it is cooled.  Add in the butter a stick at a time, beating until smooth.  Once all the butter is mixed in, beat the buttercream on high for 8-10 minutes.

13.  Gradually add in the vanilla.  Scrape the insides out of the vanilla bean and add them as well.  The resulting buttercream should be white and shiny. 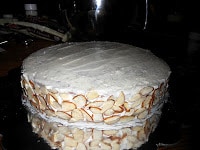 14.  Remove ¼ of the buttercream to a small bowl.  Add the Nutella and mix until well blended.  Set the frosting aside. 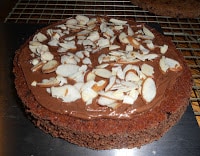 18.  Place the chocolate cake on a cake lifter.  Cover with swiss meringue buttercream.  Gently cover the sides of the cake with sliced almonds.  Carefully lift the cake and place on top of the vanilla cake in the center. 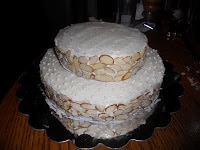 19.  Place the small vanilla cake on a cake lifter.  Cover with swiss meringue buttercream.  Gently cover the sides of the cake with sliced almonds.  Carefully lift the cake and place on top of the chocolate cake in the center.

20.  Gently place edible pearls on top of the cake layers in a pretty pattern.  Sprinkle the layers with the white edible glitter.

21.  To make the decorator's buttercream mix the butter and Crisco together.  Add in the powdered sugar and meringue powder and mix well.  Stir in the milk and vanilla.  Mix until you get the desired consistency. 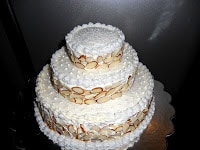 22.  Place all but a quarter cup of the buttercream in a piping bag with a star tip.  Pipe shell borders around all the cake layers.

24.  Sprinkle the top layer of the cake with silver edible glitter.  Touch up as needed.  Place in the refrigerator until time to transport the cake to its destination. 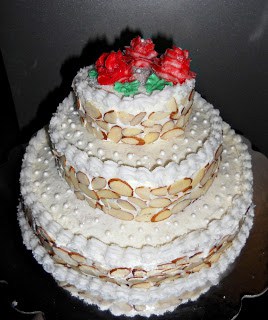