I've been part of a group that has been doing recipe swaps for many months now.  Usually we have a set recipe that we make and swap.  To switch it up a bit this month we were assigned a blog and had to choose a recipe to make from that blog.  The blog I got to choose from is Tastetastic Voyage. 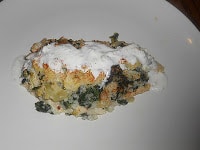 Lisa, the cook behind Tastetastic Voyage, and I have so much in common.  We are both teachers, we are very close in age, and while she currently lives in Pittsburgh I am from the great city of Pittsburgh.  I had a great time looking around her blog and finally decided on making a chicken recipe because I needed something different for dinner this week.

The recipe I chose was artichoke stuffed chicken florentine  In the original recipe it is served over pasta with a cheesy sauce.  I served it with cheesy grits instead because I had a can of grits I needed to use up.  I had two immediate issues with this recipe.  The first was that the stuffing made way too much.  If using these amounts use 2 pounds of chicken, otherwise cut the stuffing ingredients in half.  The second issue was that my chicken breasts were too small so I couldn't get the stuffing inside of them.  Instead I just piled the stuffing on top of it and ended up loving the way they looked and tasted "un-stuffed."  The chicken was moist and the stuffing tasted wonderfully with a little bit of sauce on top. 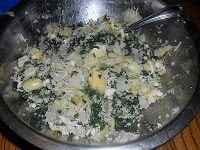 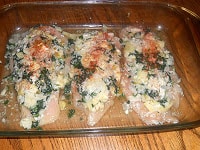 4.  Place about ⅓ cup of stuffing mixture on top of the flattened chicken.

6.  Meanwhile, in a sauce pan make a roux by melting the butter and stirring in the flour.  Slowly add in the milk and bring to a simmer.  Stir in the Parmesan cheese, nutmeg, black pepper, and parsley flakes.  Cook until it begins to simmer.

7.  Put the chicken on a plate and pour a spoonful of sauce over top of each. 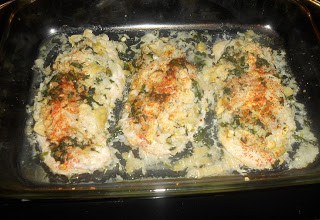