I recently saw a picture of Alice Springs chicken and knew it was something I had to make.  Chicken is my absolute favorite meat and smothering it with cheese is my favorite way to eat it.  This chicken is not only smothered with cheese but with sauteed mushrooms, bacon, and a honey mustard sauce as well. 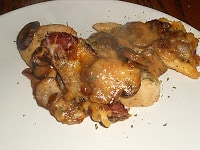 I was a little concerned that the Dijon mustard would overpower the other flavors in this dish, but once it was combined with the honey and oil it took on a whole new flavor.  The chicken itself was incredibly moist and the sweet and tangy honey mustard was slathered on top of it.  Then came the sauteed mushrooms and bacon.  It's finished off with a handful of Mexican blend cheese.

The only word to describe it is delicious.  My husband, who is not all that fond of chicken, even called me at work the next day to tell me how good this chicken was.  I served it with a side of mashed potatoes and some green beans.

1.  Combine the mustard, honey, half the olive oil, and the lemon juice in a bowl.  Whisk to combine.

2.  Place the chicken breasts in a ziplock bag and our half the mustard mixture over top.  Refrigerate for at least 2 hours.

3.  Preheat the oven to 375 degrees.  Heat the remaining olive oil in a large skillet over medium high heat.  Remove the chicken from the marinade and sprinkle with salt and pepper.

4.  Add the chicken to the skillet and cook for 5 minutes on each side or until browned.  Remove and place in a 9 x 13 pan.  Brush with remaining marinade.

6.  Cook the bacon in the same skillet, turning to brown on both sides.  Remove the bacon to a paper towel and let drain for 2 minutes.  Remove the chicken from the oven.  Place a strip of bacon on each piece of chicken and sprinkle with the cheese.  Cover with aluminum foil and bake 10 minutes or until cheese is melted and the chicken is cooked through.

7.  Remove from oven and top with any remaining marinade and sprinkle with parsley. 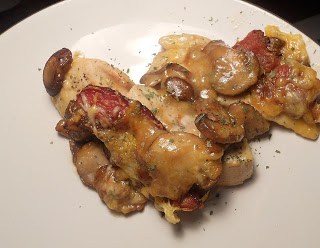