I was recently working on a new dessert and was trying to get the perfect almond to go with it.  During my hours of trial and error I found two nuts that stood up to the test.  The dripping caramelized almonds take whole almonds, dip them in homemade caramel at the hard crack stage, and allow them to drip which in turn forms "tails" on the nuts.  The other almond is a spiced almond flavored with nutmeg, cinnamon, ginger, and cayenne pepper.  Both are delicious in their own way and can be used in a variety of dishes.  The spiced almonds are great just as a snack by themselves.

1.  Put each whole almond on the end of a wooden or metal skewer. Pierce it just enough so that it stays on the skewer.  I used metal ones, but I've seen wooden ones used. 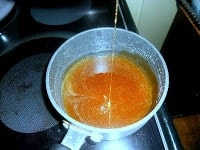 2.  In a small saucepan over medium high heat, bring the sugar and water to a boil.  Continue boiling, stirring occasionally, until the sauce reaches a golden brown color.  Immediately put it into an ice bath so it does not burn.  I poured the sauce into a mixing bowl then dunked that into an ice bath.

3.  Stir the sauce until it thickens.  Quickly spread out newspaper underneath your kitchen counter. 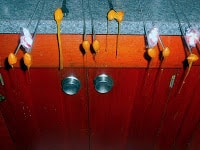 4.  Working quickly dip the end of the almonds into the caramel and place the skewer on the edge of the counter, allowing the caramel to drip down.  Some will fall onto the newspaper and that's ok.

5.  Allow the caramel to harden then trim the "tails" to size.  Serve with your favorite dessert or over top of ice cream.

1.  Preheat the oven to 350 degrees.   Line a baking sheet with parchment paper.

2.  In a medium bowl mix the sugar, cinnamon, nutmeg, ginger, cayenne pepper, and salt in a bowl.

3.  In a small bowl beat the egg white until it is frothy and thick.  Pour over top of the spice mixture and whisk to combine.

4.  Mix in the lemon zest.  Add the almonds and toss to coat.

5.  Spoon the nuts onto the baking sheet and bake for 30 minutes.  Cool the nuts completely and remove from parchment.  They can be stored for up to 2 weeks in an airtight container. 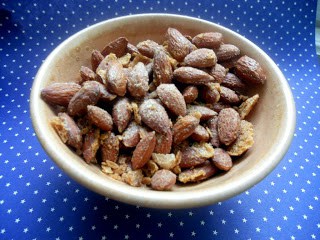 This post linked to:
It's a Keeper Thursdays, Frugal Food Thursday﻿, Sharing Sunday