The May 2011 Daring Bakers' challenge was hosted by Emma of CookCraftGrow and Jenny of Purple House Dirt.  They chose to challenge everyone to make a Chocolate Marquise.  The inspiration for this recipe comes from a dessert they prepared at a restaurant in Seattle.  When I first looked over the ingredient list I thought a dozen eggs??? I couldn’t imagine a dessert using a dozen eggs. Thankfully that was for a full recipe that feeds 20 people and when I used the quarter recipe it only used 3 eggs.

The hardest part of making this dessert was finding the time to make all of the components. The process of making each piece is fairly simpler, though it is very time consuming. I decided to make this dessert for one of my friend’s birthday. She and her husband were coming over on Saturday night so I split the tasks into two days. On Friday night I made the chocolate base and the chocolate marquise so that it could freeze overnight. I poured the marquise into a loaf pan, covered it with plastic wrap, and put it in the oven. 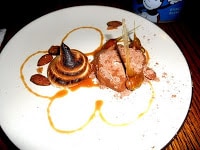 The marquise itself turned out amazing. My friends, and my husband, were impressed. The chocolate marquise was silky smooth and chocolaty, filled with hints of spices and lemon. I put it on top of the pillow soft torched meringue and topped it off with a few of the nuts. The plates were drizzled in the caramel rum sauce which seemed to pull this entire dessert together.

This is a dessert that is made to impress. It’s so fancy and gorgeous. I would love to make it again for a large dinner party or a birthday get-together.

Chocolate Base (a component of the Chocolate Marquise) 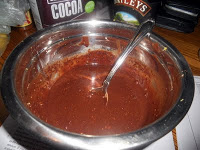 1. Break the chocolate into pieces and put it in a small mixing bowl.
2. In a double broiler, heat the heavy cream until it is hot but not boiling. Remove it from the stove and pour over top of the chocolate.

3. Stir the cream and chocolate mixture until the chocolate is completely melted and smooth.

4. Add in all the remaining ingredients and mix well. Set the bowl aside to cool. Do not use in the chocolate marquise until it is at room temperature. 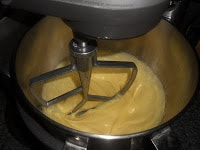 1. In the bowl of a stand mixer, combine the egg yolks and whole egg. Beat on high for 10 minutes, or until the eggs are thick and pale.
2. Five minutes after starting to beat the eggs begin making the simple syrup mixture. In a small saucepan bring the sugar and water to a boil over medium high heat. Let it cook to the softball stage (235 degrees).
3. Reduce the speed on the mixer to low and drizzle the simple syrup mixture into the eggs. When all the syrup has been added return the mixer to high speed. Allow to mix 5-7 minutes or until the bowl is cool to the touch. 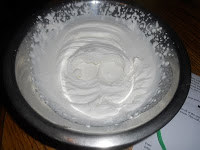 4. In another mixing bowl whip the heavy cream. I used my hand mixer since the stand mixer was mixing the eggs. Once soft peaks have formed set aside.
5. When the egg mixture has cooled, add in the chocolate base, cinnamon, ginger, and nutmeg. Mix on low speed for one minute. Then fold in half of the whipped cream. Once it is incorporated, fold in the other half. 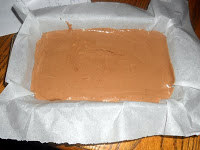 7. Freeze the chocolate mixture for at least 8 hours. When you are ready to plate the chocolate remove it from the freezer and let thaw for 5 minutes. Pull up on the parchment paper and put the chocolate marquise on a cutting board.

8. Mix together the cocoa powder and powdered sugar in a bowl. Cut the chocolate marquise into 2 x 2 squares and roll in the cocoa mixture. 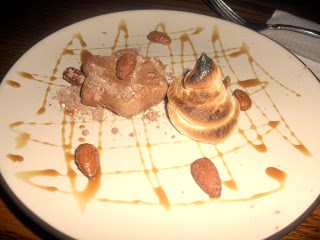 1.  Combine the egg whites, sugar, and vinegar in a metal bowl.  Using your hand, mix the ingredients together. 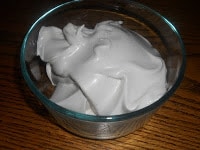 2.  In a small saucepan bring water to a boil.  Place the metal bowl with the egg whites on top of the suacepan to warm the eggs.  Continue mixing the eggs with your hands, stirring until the mixture is heated up and the sugar is dissolved.

3.  Remove the bowl from the saucepan and mix with a hand mixer until soft peaks for.  Add in the vanilla and spices and beat an additional minute.

4.  When ready to use, put in a piping bag and pipe onto a cookie sheet.

5.  Heat the oven to broil and cook for 3-4 mintues or until the tops of the meringues are torched. 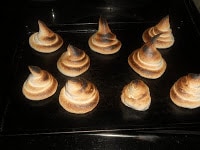 1.  In a heavy bottomed saucepan, combine the sugar and water over medium high heat.  Boil until the mixture turns a golden brown.  Do not over heat or the mixture will burn!  (I had to make this twice because I burnt the first pan) 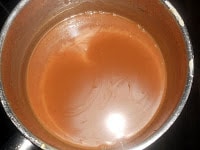 2.  Immediately remove the pan from the heat and add some of the cream.  It will bubble and spit, so add a little at a time while stirring.  Continue adding the heavy cream until it is all adding.  Return to the stove over low heat and whisk.  When the caramel sauce darkens to the color you desire remove from heat.  Add the rum and stir.
3.  Allow the caramel sauce to cool.  Before serving add the sea salt and mix. 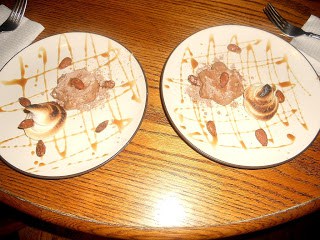