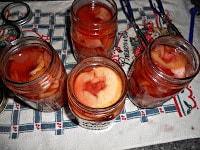 When I was a kid we used to go to places with salad bars and buffets.  Man did I love those places.  We didn't go often but it was always a treat to be able to pick what I wanted to eat.  One thing I can remember always picking off the salad bar were these deep red apple rings that tasted like cinnamon.  I had never had anything like them before and I choose them every time we went.

Fast forward 20 years and when I was looking through my Ball Blue Book I came across a recipe for apple rings.  It used red food coloring and sounded like to rings I had loved as a kid.  I knew I had to make them!

The entire house smelled with cinnamon and spices while the rings were cooking.  The recipe is so simple and the apples don't require peeling so it was much simpler then many of my other apple recipes.  As I was placing the apples into the jar I left a few out for me to try.  They were so good!  The apples are soft, sweet, and filled with spices.  I'm going to let them sit in the sweet syrup for  few weeks before I open them but I can't wait to try them!

1.  Wash and core the apples, do not peel then.  Slice the apples crosswise into ¼ inch rings.  Place them in a bowl with the lemon juice and cover with water to prevent browning.

2.  Meanwhile, combine the sugar and water in a large saucepot.  Place the cloves and cinnamon sticks in a spice bag and drop it in the syrup mixture.  Add in a few drops of red food coloring.  Bring the syrup to a boil and boil for 5 minutes.  Remove from heat. 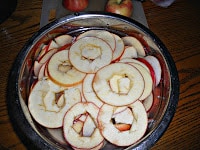 3.  Drain the apple rings from the lemon juice mixture and place in the syrup.  Let stand for 10 minutes. 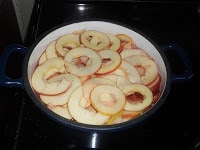 7.  Pack the cooled apple rings loosely into the pint jars.  Pour the hot syrup over top of the, leaving ½ inch of headspace.  Remove any air bubbles and adjust the two piece cap.

8.  Place the jars in the boiling water canner, cover, and boil for 15 minutes.  Remove the canner from the heat, remove lid, and allow to sit for 5 minutes.

9.  Remove the jars from the water and allow them to cool for 12 hours.  Check the seal and store for up to 1 year. 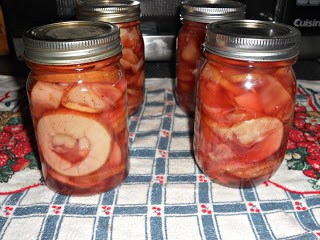