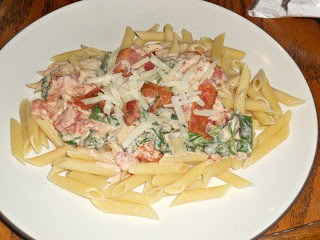 Of course pasta was up at the top of that list.  When Mary Ellen posted this bacon ranch pasta a few weeks ago I couldn't wait to make it.  I knew my husband would like it because it had bacon in it and I was happy that it had both spinach and tomatoes in it.

This ended up being a delicious pasta dish filled with many different flavors.  The bacon was crisp, the cream sauce cheesy and smooth, and the tomatoes only added to the dish.  We topped it off with additional cheese and bacon.  It was also a very pretty dish with the light colored sauce, red tomatoes, and green spinach.

1.  Cook the pasta according to the package directions.  Drain and set aside.

2.  In a large skillet cook the bacon until it is browned and crisp.  Remove to a paper towel lined plate to drain.  Cool and then crumble.

3.  Pour all but 1 tablespoon of bacon grease out of the skillet.  Add the onion to the pan with the bacon grease and cook for 3-4 minutes over medium heat.  Add in the garlic and saute for an additional minute. 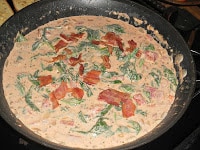 4.  Stir in the tomatoes and continue cooking for 2-3 minutes.

5.  Add in the cream and bring to a boil.  Reduce heat to a simmer.

6.  In a small bowl combine the parsley, oregano, black pepper, salt, onion powder, and thyme.  Mix and then add to the skillet.  Mix well.

7.  Stir in half of the Parmesan and Pecorino cheeses.  Stir in the spinach and cook for 3 minutes.

8.  Add the pasta to the sauce and toss to coat.  Top with half of the bacon.

9.  Serve on a plate with additional bacon and cheeses for topping. 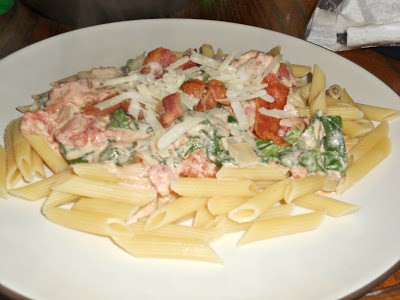