Vegan Recipes That’ll Punch Your Taste Buds in the Mouth 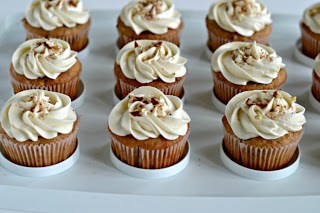 Natalie has been described as "Martha Stewart meets Iron Maiden," taking vegan cooking to places it has never been before. Influenced by slasher films, pro-wrestling, punk rock and heavy metal, her quirky-yet-delicious comfort foods are a refreshing take on vegan eating with award-winning flavors. Along the way, her off-color humor, irreverent rants and density of pop-culture references will make you laugh out loud.

Inside this high-energy cookbook you’ll find recipes for Bike Messenger Brownies—inspired by the espresso-infused chai latte these speed demons use to fuel up; and Crouching Cornbread, Hidden Broccoli—Natalie’s sneaky way of getting her son to eat vegetables. Other creations include the Grilled Mac ‘n’ Cheez Sandwich, Taco Lasagna, Chick-O Cheesecake, and her Shepherd’s Pie Pizza, about which she writes, "Some people were born to rock n’ roll. Others were born to ride. I was born to put mashed potatoes on pizza."

Bake and Destroy was named one of the most anticipated cookbooks of the year by VegNews.  (synopsis of Bake and Destroy:  Good Food For Bad Vegans by Natalie Slater) 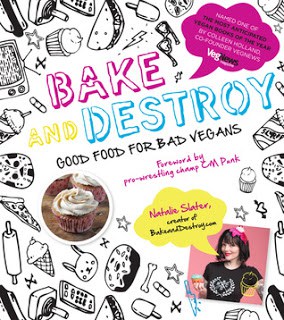 I have to say, when I first received this book I loved the cover.  It had a photo of Natalie, a picture of a cupcakes, and lots of food doodles.  I was immediately drawn to it.  Upon opening the book I immediately began tagging recipes I wanted to make.  The photos in the book were beautiful and the flavor combinations were out of this world.
While I'd normally choose 2 or 3 recipes to make from a cookbook before reviewing it, I had 7 on my list for this book.  In one weekend I made the Banana Bread French Toast Cupcakes, Peach Cobbler Cupcakes, Chai Berry Muffins, and Breakfast Bites.  The best part?  They all rocked!  Seriously!  I had my husband try everything as well and he was shocked when I told him that everything was vegan.

The recipes in this book use easy to find, common ingredients that are found in most grocery stores.  I appreciate that as I live in a small town and often have difficulty finding items for specialty baked goods.  I've only recently begun to make vegan baked goods but these were way better then what I've been making.  This is definitely my "go to" vegan cookbook from now on!

I give this cookbook 5 out of 5 stars.

The first recipe I actually ended up making was the banana bread french toast cupcakes.  They just sounded awesome.  The cupcakes are really a basic vegan banana bread with nuts.  The vegan frosting on top is where the french toast part comes in.  The fluffy maple frosting works so well with these cupcakes.  It really was like eating french toast in a cupcake.   They were awesome.

In a smaller bowl, whisk together the oil, rice milk, vanilla, almond extract and mashed banana.

Stir or fold the wet ingredients into the dry. Small lumps are fine. Finally, add the walnuts, folding gently.
Fill the liners two-thirds full. Bake for 20 to 22 minutes, or until the tops spring back when lightly touched. Let cool in the pan on a wire rack for 10 minutes, then remove from the pan and let cool completely before frosting.

To make the vegan maple buttercream frosting, beat all the ingredients together in a bowl until they’re light and fluffy. 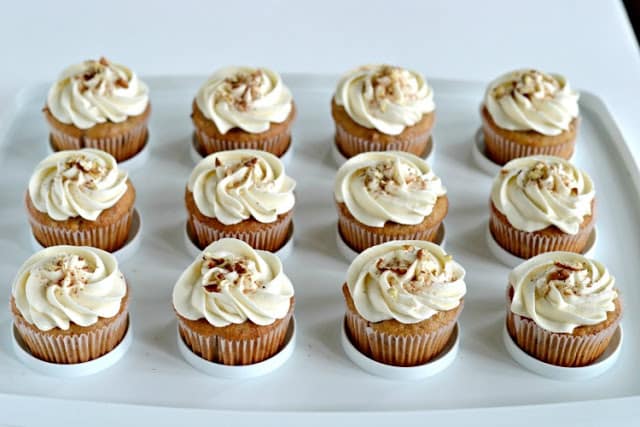