For this month's recipe swap I received a recipe for beef and Guinness stew. The stew sounded delicious except for the Guinness. I am not a beer drinker and while I don’t mind regular beer in my food, dark beers aren’t very good. My husband does really enjoy Guinnes though and he though this stew sounded wonderful so I decided to make it with the Guinness. 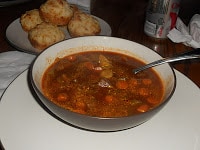 The day I made it turned out to be the perfect stew day. It was only about 50 degrees and it was pouring down rain. Both Frank and I were freezing and the stew sounded perfect. It smelled great as it cooked with the beef, beer, and broth mixing together. The vegetables are added in near the end, but we found them to be a little firm and ended up cooking it an extra 45 minutes. Next time I’d put them in as soon as I took the lid off the first time.

My husband really enjoyed the stew. He thought the broth was amazing and wants me to make a crab soup with the base of this recipe. I liked the stew a lot though I wasn’t a huge fan of the Guinness after taste. All in all it was a hearty stew that was perfect for a cold, rainy day. 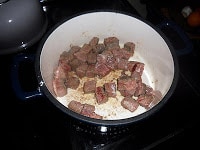 1. In a Dutch oven heat the oil and butter.

2. Place the flour in a shallow dish. Sprinkle the beef with salt and pepper then dredge the pieces through the flour. Add the beef to the pan and cook for 5-10 minutes or until the beef is browned on all sides.

3. Add in the onion and cook for 5 minutes or until tender. Stir in the garlic and tomato paste and cook an additional minute, stirring constantly. Stir in the broth and beer, scraping the bottom of the pan to loosen the browned bits. Mix in the caraway seeds and bring to a boil. Reduce heat, cover, and simmer for 1 hour.

4. After an hour uncover the Dutch oven and bring to a boil over low heat. Cook for 45 minutes, stirring occasionally. After 45 minutes add in the carrots, parsnips, and celery. Cover the pot again and cook for 45 minutes.

5. Uncover the pot after 45 minutes, bring the stew to a boil, and cook for 15 minutes or until the vegetables are tender.

6. Sprinkle with parsley and serve. 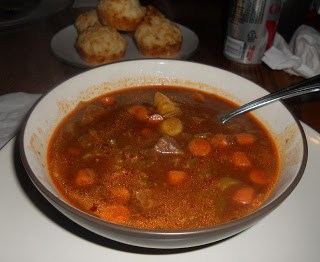