When I was at the market the other day I mistakenly bought 2 pounds of sirloin steak instead of 1 pound.  After making soup with half of it I was stuck wondering what I could make with the other half.  I didn't want to make another soup and we just had stir fry so that was out too.  I rummaged around in my purple folder filled with clipped magazine recipes and came up with beef and mushroom potpie.  Turns out I had half a container of mushrooms that needed cooked as well so this killed two birds with one stone. 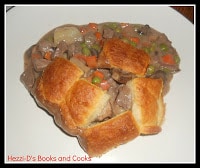 Now I'm not a huge potpie person.  I think they are very filling and often the vegetables are very mushy inside which isn't too appealing.  I also despise peas which come in just about every potpie I've ever eaten.  When I mentioned to Frank that's what I was making he smiled and commented that he was just thinking about potpies;  it must have been fate.

The pot pie has a lot of vegetables in it which I really liked.  I thought the gravy was well seasoned and had a great flavor as well.  The vegetables were tender but not mushy.  The top is made out of crescent rolls instead of a pie crust which I loved.  The flaky topping was delicious.  The entire combination made for great comfort food on a cold, rainy night.

1.  Poke holes in the potato and place it in a microwave safe dish.  Cook on high for 7 minutes.  Allow to cool.  Peel and cube.

2.  In a large skillet heat olive oil over medium high heat.  Saute the sirloin cubes until they are browned on all sides.  Remove from the pan and set aside. 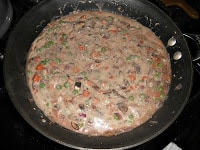 3.  In the same skillet sauce the onion, garlic, and mushrooms for 5 minutes.  Add in the carrots, peas, ketchup, and pepper.  Stir well.

5.  In a small bowl combine the cornstarch, sour cream, and gravy.  Slowly stir the gravy mixture into the vegetables in the pan.  Add in the potatoes and beef and mix well to combine. 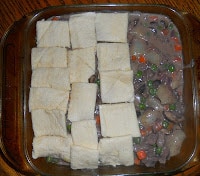 6.  Pour the beef and vegetable mixture into the prepared pan.

7.  Remove the crescent roll dough from the tube and cut into 16 slices.  Then cut each slice in half.  Arrange the dough on top of the beef mixture.

8.  Bake at 375 for 20 minutes or until the filling is bubbly and the crust is golden brown. 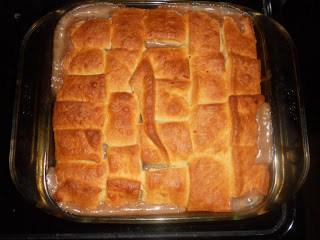