What a crazy week it has been!  We had a half day on Tuesday, I had meetings all day Wednesday, Halloween on Thursday, and then a behavioral reward on Friday.  I'm exhausted but it's also been one of the most fun weeks.  My kids had a blast at our behavioral reward party and we even had an impromptu dance party!  (I may have been singing and dancing!) 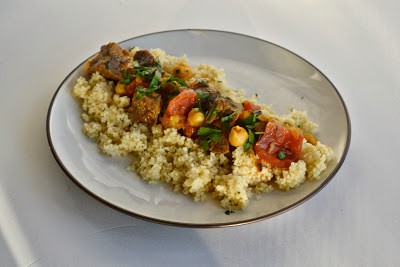 At the end of the week I realized I still hadn't made my dish for this week's #SundaySupper theme Middle Eastern Cuisine.  There's a little placed called Ali Baba in Morgantown, WV where we like to go about once a month.  They have the best Mediterranean food around!  Seriously the lamb kabobs are amazing, the hummus is the best I've had, and the baba ganoush is out of this world!  I don't have much experience making any Middle Eastern Cuisine except for hummus, so I took this opportunity to make something totally new.

I love lamb so I wanted to make lamb tagine.  After my crazy week I went to the market and of course there was no lamb to be found.  I spent months last year begging for ground lamb and they now stock that all the time but other lamb meat is not readily available in my area.  So unfortunately I had to go for my second choice which was beef.  In the end the beef tagine ended up being pretty awesome so I didn't mind. 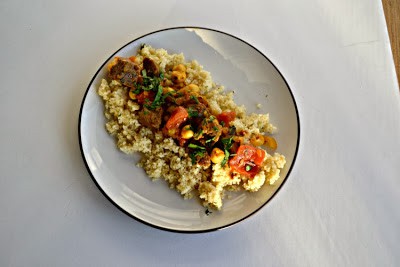 The flavors are sweet, savory, and a bit spicy.  I had mine with the chopped apricots but my husband doesn't like fruit in his entrees so I kept them out of his.  We both like the spices in this dish and that it was served over couscous.  It was a bright and vibrant dish that I can't wait to make again (with lamb!)

1.  Heat the olive oil in a large skillet over medium heat.  Season the beef with salt and pepper then add to the skillet.  Brown on all sides.  Add in the onion and saute for 5 minutes. 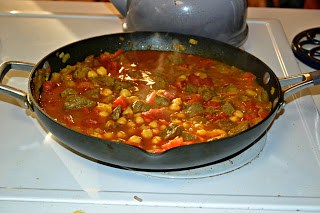 2.  Stir in the garlic cloves and cook for 1 minute.  Add in the tumeric, paprika, and ginger and mix well.

3.  Stir in the diced tomatoes, chicken stock, and flour.  Mix well.  Bring to a boil then reduced heat to medium low and cook for 40 minutes.

4.  Stir in the chickpeas and apricots and cook for 5 minutes.  Remove from heat.

5.  Serve over top of couscous and sprinkle with cilantro. 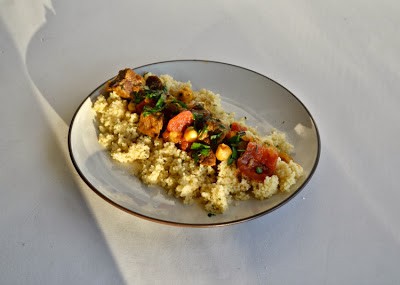 See all the Middle Eastern goodness: