She eloped with Bigfoot. Or maybe Bigfoot kidnapped her. Either way, I've been hired to uncover the truth behind Cindy Funk's disappearance. Me? I'm Floyd, and I'm a PI living my life as Elvis would have wanted. Not just in sequined jumpsuits. With character.

Cindy's trail leads me to River City, Oregon—aka the Mythical Creature Capital of the World—where I catch Case #2. This one from an eccentric billionaire who's lost a priceless piece of "art." Enter one dead body and I end up deputized to solve Case #3, tracking down a man-eating mountain lion. Or maybe it's a chupacabra. Or just an ordinary murderer. Hard to say.

I've handled my fair share of crazy, but River City's secrets have me spooked. With an influx of tourists arriving for the town's annual Elvis tribute contest—what are the chances?—I've got to save the girl, solve the rich guy's problem and leash that chupacabra before a second body is discovered. It might just be mine.  (-synopsis) 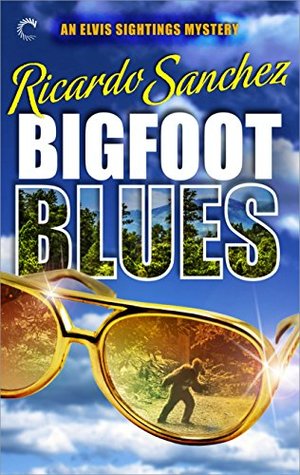 The story surrounds Floyd, a private detective who dresses like Elvis.  Don't call him an impersonator, he's a lifestyle Elvis, not an impersonator.   He's called away on a case to find a man's missing daughter.   She apparently met and married Bigfoot and is currently on her honeymoon with him.

Floyd travels to River City to track down Cindy, the missing girl.  His problems begin when he enters the hotel and learns the Elvis tribute contest is being held that week and everyone thinks he's an impersonator.  Things get worse when Goliath, a little person, shows up and tries to bully him into leaving.   Instead of getting him to leave, Goliath ends up staying in River City and quickly becomes Floyd's new partner.

While the pair are following up on leads, they meet a man who had his swampdog stolen.  The man pays Floyd, not in cash, but in Elvis memorabilia to find the missing piece.  Soon Floyd is hot on the tracks of the missing swampdog and maybe even Cindy.

Floyd and Goliath go on a series of adventures, are chased through the woods by a monster, find a dead man, and are even made police officers.   The problem is, they still haven't found Cindy.   Can they find Bigfoot and Cindy and close the case so they can get home or will they be stuck in River City?

I found this book hard to get into because I didn't quite understand what was going on.   I didn't know why Floyd dressed like Elvis and thought it was odd a private detective would dress like that.  I also met Wanda, his girlfriend, in the beginning and couldn't understand why she had a beard.   Eventually everything gets explained but it took a while to get there.

Also, the whole Bigfoot story line through me for a loop.   I thought the entire book was a little farfetched and had a hard time getting into the story.  However, once it moved away from the Bigfoot line and went onto swampdog and murder, I found it easier to read.  I got more invested in the characters and actually started liking Floyd.  He tries hard to do the right thing but finds himself in so many crazy situations.  I was rooting for him to find Cindy, figure out what happened to swampdog, and to solve the murder so he could go get his lady.

Overall the book was confusing in the beginning, I had a hard time getting to the point where I wanted to read it, but once I did it was actually a fun, easy read.  The characters really started having their own personalities and the storyline was easier to follow.   It's a good read for anyone who likes mysteries and folklore.