Werewolf princess Ashling Boru's eighteenth birthday is only a year away, which means that she only has twelve months before she is claimed and fulfills her prophecy to unite the packs and lead her people. Her father decrees that her four suitors must fight in the Bloodrealms, the werewolves' ancient underground fighting world, and the winner will have King Boru's choice to win Ashling's hand. The wolf laws are rigid and barbaric, and Ashling's illicit love for Grey, if discovered, will mean his death. But when Ashling and Grey get trapped in the blood-soaked depths of the Bloodrealms, they find ancient horrors far greater than Ashling's father's rule.

With betrayal around every corner and old nemeses set to destroy Ashling, she is more divided than ever between the destiny she didn't choose and the love that she did. To make matters worse, her decision will not only set the course of her future, but the future of her entire race. 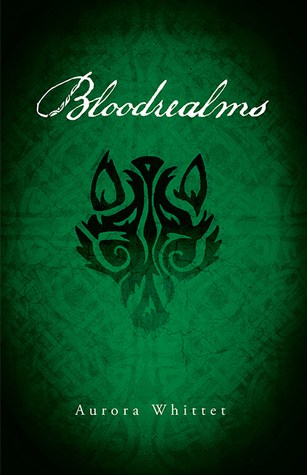 This book opens where the last book left off.   Ashling and her family are traveling to go to the wedding of her brother Quinn to Gwyn.   Ashling and her mother travel to the wedding where Ashling will get to spend some time with one of her suitors, Brychan.   While Ashling does not want to spend time with anyone but Grey, rules dictate that she give each of her four suitors a fair shot at courting her.

During their time at the home of the Kahedin's in Wales Ashling finds that she is attracted to Brychan.  In fact, she feels a love for him that is confusing.  In her heart she knows that Grey is her soul mate but she can't help feeling that Brychan is a good man and one that makes her smile.   The two begin a friendship that might even become more.

After the wedding Ashling returns to the United States with Grey and Brychan.   They are going with her to help protect her as she was attacked while spending time at the Kahedin's.   Unfortunately another attack takes place on her almost immediately and she is sent to spend time with Channing and his sister Cora.   Channing is yet another suitor and perhaps the most handsome and richest one.   While Ashling has always been put off by him she soon finds herself being charmed by him.  He is not her type but she feels a friendship with him.

Finally her last suitor, Eamon, shows up.  He is pushy and demanding in wanting her attention.  Ashling is not pleased and when their date does not go well he grabs her.  His touch burns her flesh and she feels fear as she is not sure who or what he really is.

After her attack by Eamon her other suitors decide to ban together to protect her against Eamon.   Grey, Channing, and Brychan join Ashling's pack and train together in the Bloodrealms.   All Ashling wants is for the three of them to protect one another but will it be enough when it comes to the dark world of the Bloodrealms?

Again I devoured this book in just a few days.  I enjoyed learning about Ashling's other suitors in this book and was happy to find that I liked both Channing and Brychan.  I already liked Grey and this book showed him to be an honorable mate.  However, I was surprised to find myself rooting for Brychan in this book.

I thought Brychan was sweet, respectful, and really paid attention to Ashling.  While he is much older then she is he understands who she is and what she needs.   He falls in love with her and wants nothing more to protect her from the evil in the world.

Then they all go to the Bloodrealms.  It's like nowhere Ashling has ever been.  Humans and wolves are trapped down here to pay a debt or they are training to be an honorable member of their family.  In the Bloodrealms they fight to the death but no one sheds a tear when you do.  Ashling will learn that this is the other side of the world of wolves and it's one she doesn't like.

Down in the Bloodrealms are things that go bump in the night.  There are so many people hunting Ashling but when it comes down to it and we see who is orchestrating the games it's a surprise to every single one of her pack.  Ashling will watch those around her fight for her, with her, and to save her.  At the end a winner will claim her as their own.

There is a lot of action in this book with attacks on Ashling, attacks on the wolf pack, and the fighting in the Bloodrealms.  I had a hard time putting it down after each chapter because I wanted to learn more about the suitors and see how they interact with Ashling.   I also wanted to find out who was coming after Ashling and why.

While I really enjoyed this book there were a few things that bothered me.  At one point everyone makes a huge deal out of Ashling kissing both Grey and Brychan. However, a few chapters later Grey kisses her in front of everyone and no one says a word.  I also thought it was odd that Ashling and Grey would go off by themselves for hours at a time and no one ever seemed to notice.   Since everyone was supposed to be protecting Ashling  you would think they would make sure they knew where she was at all times.

Otherwise this was a great book with a lot of interactions and character development.   I can't wait to read the third and final book to find out what happens to Ashling and who will be her husband.  I also want to see if she is able to unite the wolves together finally.