This is my first month joining in on the Daring Bakers' challenge and I was so excited to finally become a part of this group!  The 2010 November Daring Bakers’ challenge was hosted by Simona of briciole. She chose to challenge Daring Bakers’ to make pasta frolla for a crostata. She used her own experience as a source, as well as information from Pellegrino Artusi’s Science in the Kitchen and the Art of Eating Well.

I have never made a crostata and I didn't even own a tart pan.  I figured this was the perfect opportunity to splurge and buy myself one.  I looked for tart pans at four different stores before I finally found one at the local kitchen store.  I was very excited to start on this challenge. 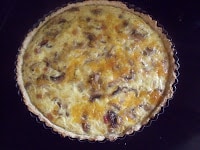 I am usually one for making sweets but I had just made a pan of brownies the day before so I decided to go for a savory crostata.  My husband loves breakfast foods but since I'm not a big breakfast eater I rarely make breakfast for him.  This was the perfect opportunity to make him a breakfast treat, even if I had an alterior motive.
When I think of breakfast I think of eggs and bacon.  I wanted to make the crostata a bit more gourmet so I finally decided on a filling of pancetta, mushrooms, cheddar cheese, thyme, and a savory egg custard.  The result was amazing!  The filling was the perfect balance of creamy egg custard and salty pancetta with the mushrooms blending everything together.  The crust was flaky and brown.  My husband loved it and was thrilled I had made him breakfast.  I enjoyed it so much I may make breakfast again next weekend! 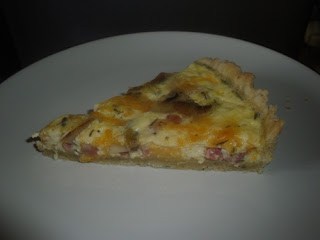 Breakfast Crostata with Pancetta, Mushrooms, and Egg Custard
(Crostata crust recipe inspired by those in the book La scienza in cucina e l’arte di mangiare bene by Pellegrino Artusi (1820-1911) translated into English as Science in the Kitchen and the Art of Eating Well)

1. In a large bowl whisk together flour, salt, and thyme.

2. Rub or cut the butter into the flour mixture until it has the consistency of coarse crumbs. (I used my fingers to do this)

3. Make a well in the center of the mounded flour and butter mixture. Pour the beaten eggs into the well. Add the lemon zest and thyme.
4. Use a fork to incorporate the liquid into the solid ingredients, then use your fingertips. Knead lightly until the dough just forms a ball. Shape into a disk and wrap with plastic wrap. Place in the refrigerator at least 2 hours or overnight.

1.  Take the dough out of the refrigerator and roll out to ⅛ inch thickness.  If the dough is firm, start by pressing the dough with the rolling pin from the middle to each end.  If it is too crumbly, add a few drops of water. 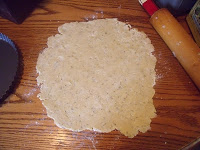 2.  Once the dough is ⅛ inch thick, flip dough over the tart pan, centering it.  Delicately press it all around so the corners are well covered.  Prick the bottom of the dough with the fork in several places.  Set aside. 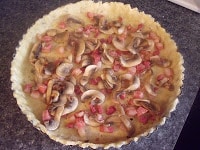 4.  In a small skillet heat the pancetta over medium high heat.  Stir for 4-5minutes or until crisp.  Remove from pan and drain on a paper towel.  Add the mushrooms to the same pan that you cooked the pancetta in.  Cook for 6-7 minutes or until browned.  Remove from skillet.
5.  In a small saucepan heat the milk and ¼ t. thyme.  Bring to a simmer, but not a boil.  Meanwhile, beat the egg and egg yolk in a bowl.  Slowly add the hot milk to the eggs, stirring contantly. 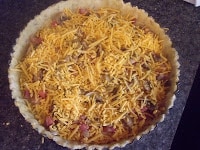 6.  Layer the pancetta and mushrooms on top of the dough in the tart pan.  Top with the cheddar cheese.  Slowly pour the egg mixture over top of the other ingredients.
7.  Put in the oven and cook 30-35 minutes, checking to see that the eggs are set and the crust is brown.  (This took 32 minutes in my oven.)  Slowly remove from the oven and release the tart base from the fluted tart ring.  Let sit 5 minutes to cool.  Cut and enjoy! 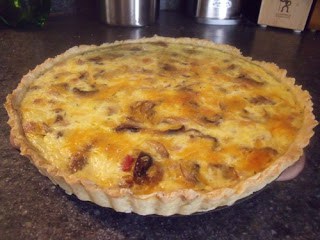 This post is linked to:
Not Baaad Sundays
Mommy's Kitchen