Bourbon Peach Pie is a delicious peach pie baked with a combination of brown sugar, bourbon, and spices in a golden brown pie crust for a tasty dessert. 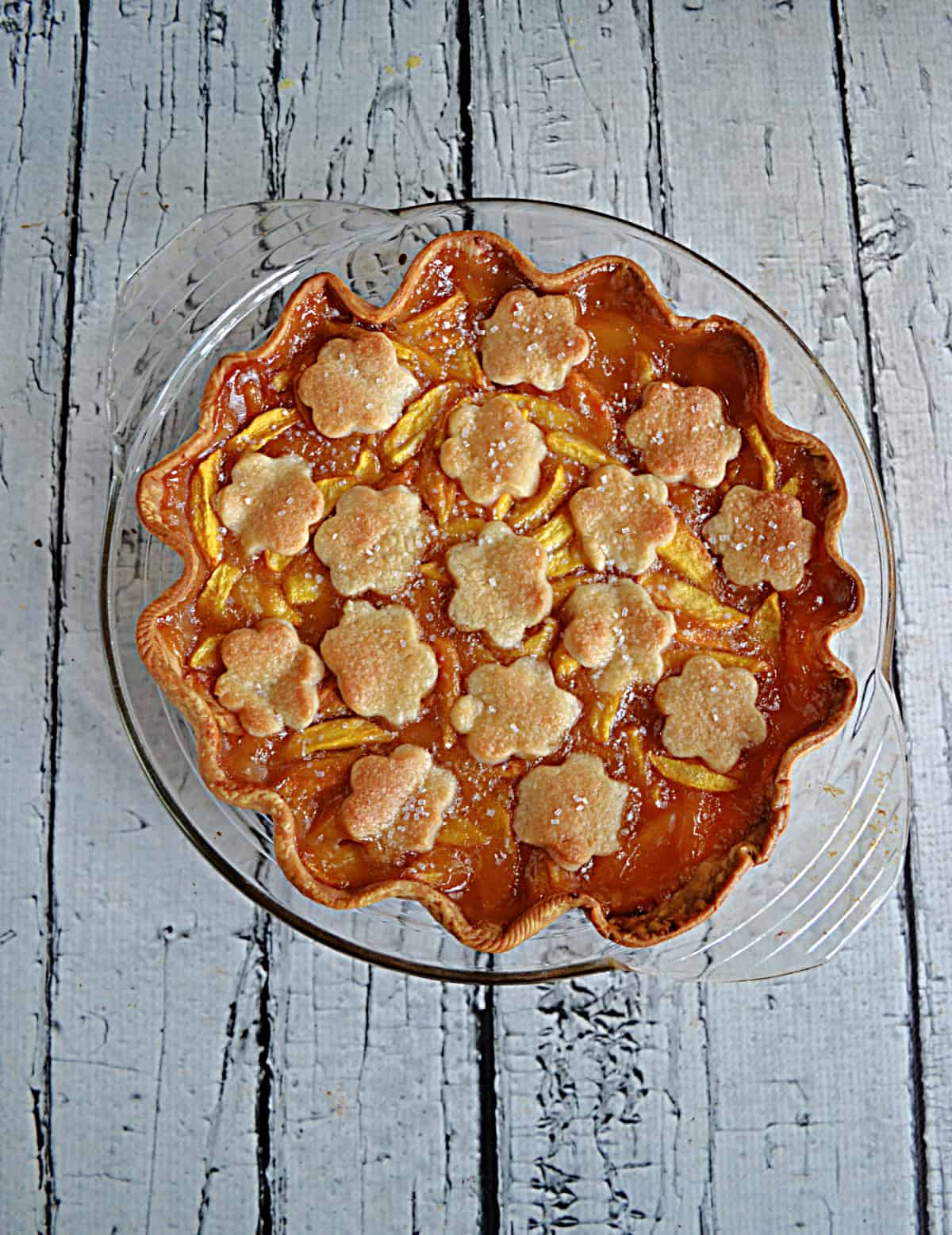 Do you like peach pie? I do! Let me tell you a little story about the last time I made a peach pie.

I was at the farmers market and there was a man there that was selling peaches. He had pints and quarts of good peaches he was selling but he also had a few huge baskets of peaches that were overly ripe.

Being the savvy shopper I am, I bought 2 baskets of the overly ripe peaches and planned on canning peach pie filling.  They were about half price and I knew I could use them.

To Make the Pie Filling: Peel the peaches and cut them in ½ inch thick slices.  In a large bowl combine the peach slices, flour, brown sugar, sugar, cinnamon, and salt.  Pour in the bourbon and toss to coat the peaches.  Pour the pie filling into the prepared crust.  Scatter butter pieces on top of the peach filling. 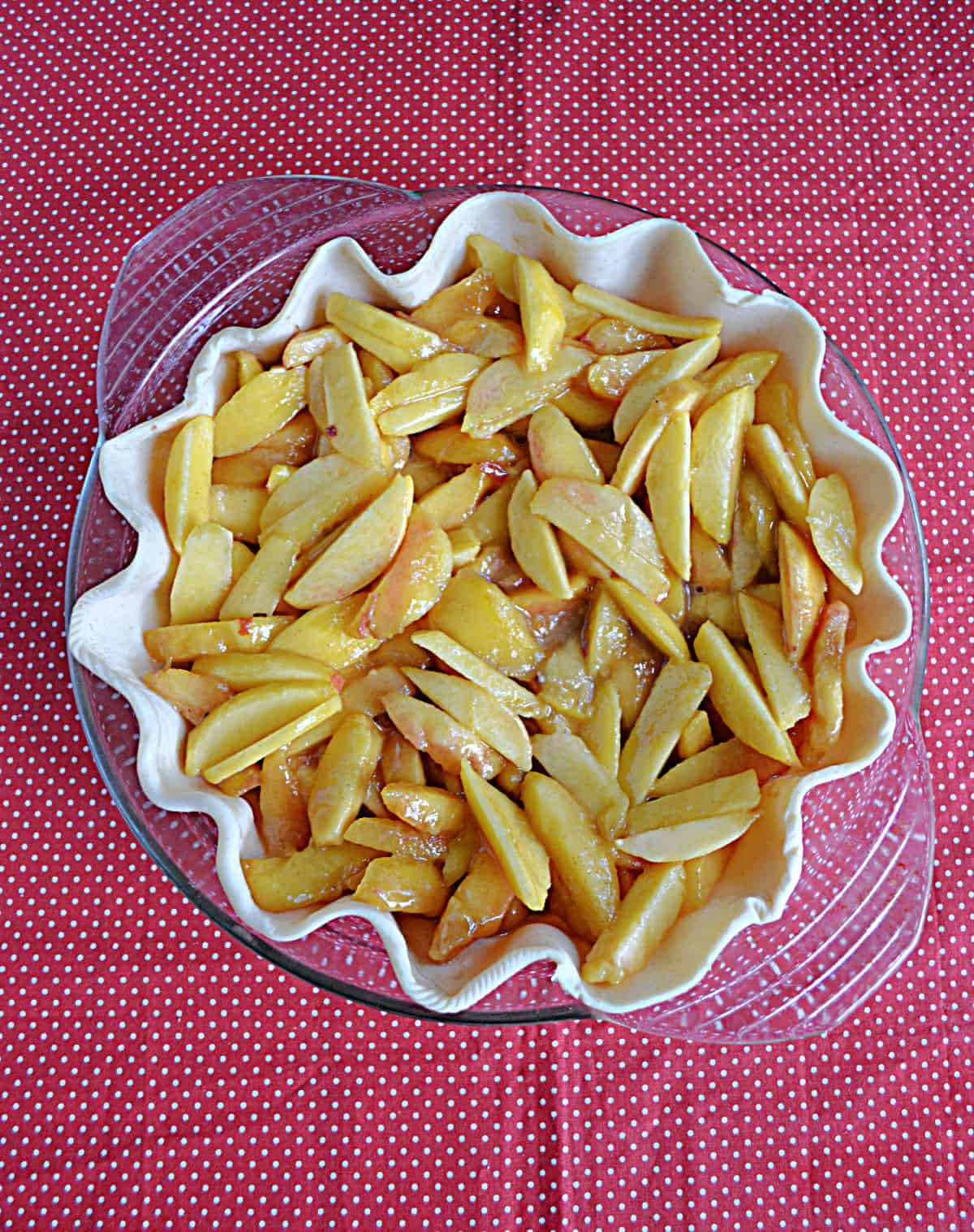 I made the peach pie filling and put it into jars. One day when my brother and his wife were coming over I used two of the jars and made a quick dessert.

We all enjoyed the peach pie but there was something odd about it. While we were eating it the pie tasted fine. The after taste was unusual though.

After several minutes my brother says, “This is going to sound weird but the after taste kind of tastes like A1 sauce.” As soon as he said it I agreed. How weird is that?

I ended up looking up the ingredients for A1 and it includes apricots and golden raisins and 2 other ingredients that were in the pie. Isn’t that crazy? Needless to say I haven’t used that recipe since.

So, when my cousin asked me to make her a peach pie I immediately asked a few of my foodie friends for a recipe. I received a few but the one that sounded the best was a bourbon and brown sugar peach pie. It was from one of my favorite bloggers so I knew it was going to be good. 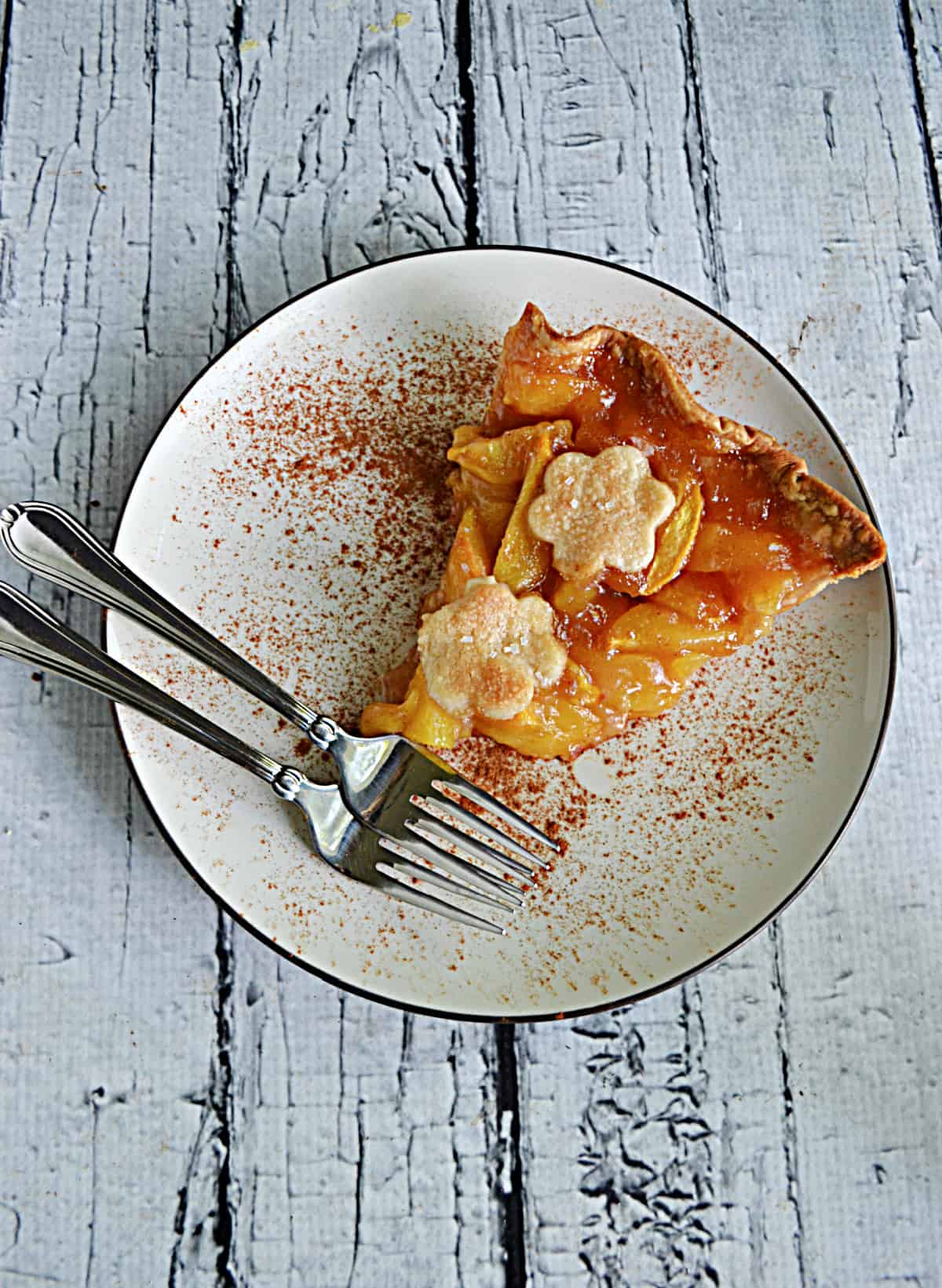 How do you peel peaches?

One way to peel peaches is to use a vegetable peeler.  This is easy to do if the peaches are ripe but still firm.  Heat a pot of water to a simmer.  With a paring knife cut a 2 inch X in the skin of each peach and place in the water. Simmer for 1 minute.  Remove and place in an ice water bath.  Once cooled the skin should pull away easily from the peach.

Do I have to use the bourbon?

How do I store the peach pie?

Loosely cover the pie with plastic wrap or foil for 2-3 days.  The pie is best eaten within 24 hours but you can store it for up to 3 days.

How do I refresh my pie crust or make it taste fresh baked?

Preheat the oven to 325 degrees.  Put the pie into the oven and bake for 10-20 minutes or until the pie is warm and the crust firms up.

Now another problem I have with making pies is that if I do a lattice design on top, it often ends up under cooked. I was worried about that with this pie but I was assured that wouldn’t happen. 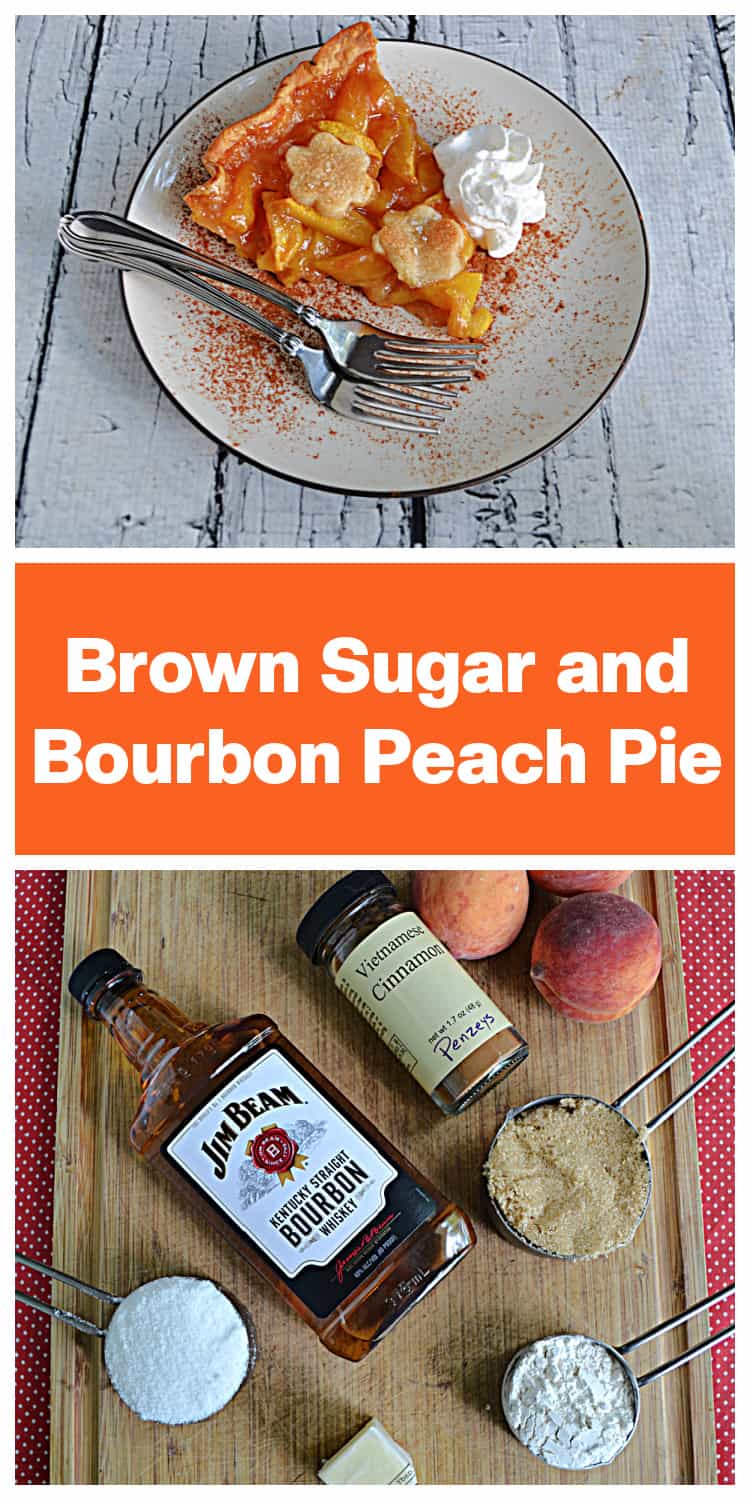 So I mixed up the filling of peaches, brown sugar, flour, spices, and bourbon and poured it all into an unbaked pie crust. I put the lattice on top, crossed my fingers, and baked it.

When I pulled the pie out of the oven the top was golden brown, the filling was bubbling, and it smelled amazing. I kept going back in the kitchen to look at it but unfortunately there would be no peach pie for me until the next day at the birthday party.

When we served the peach pie at the party every single person had a piece. I received numerous compliments and I have to say, it was pretty delicious.

The crust was flaky and buttery and the middle was the perfect combination of peaches and spices. It was eaten up with only crumbs left in the pan.  I'll be making this one over and over again! 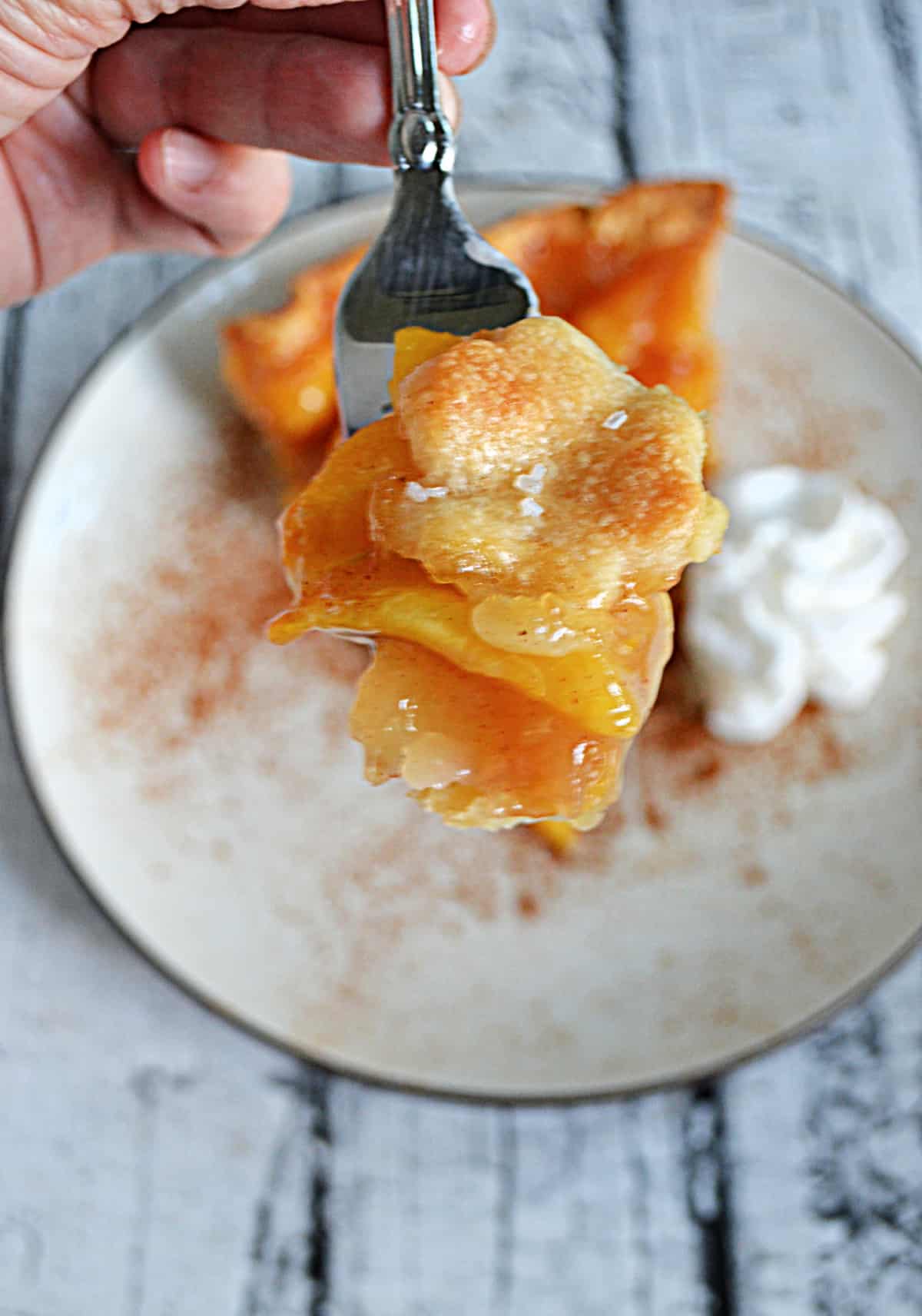 If you’ve tried my Brown Sugar and Bourbon Peach Pie or any other recipe on Hezzi-D’s Books and Cooks please take a minute to rate the recipe and leave a comment letting me know how you liked it. I love hearing from you! You can FOLLOW ME on: 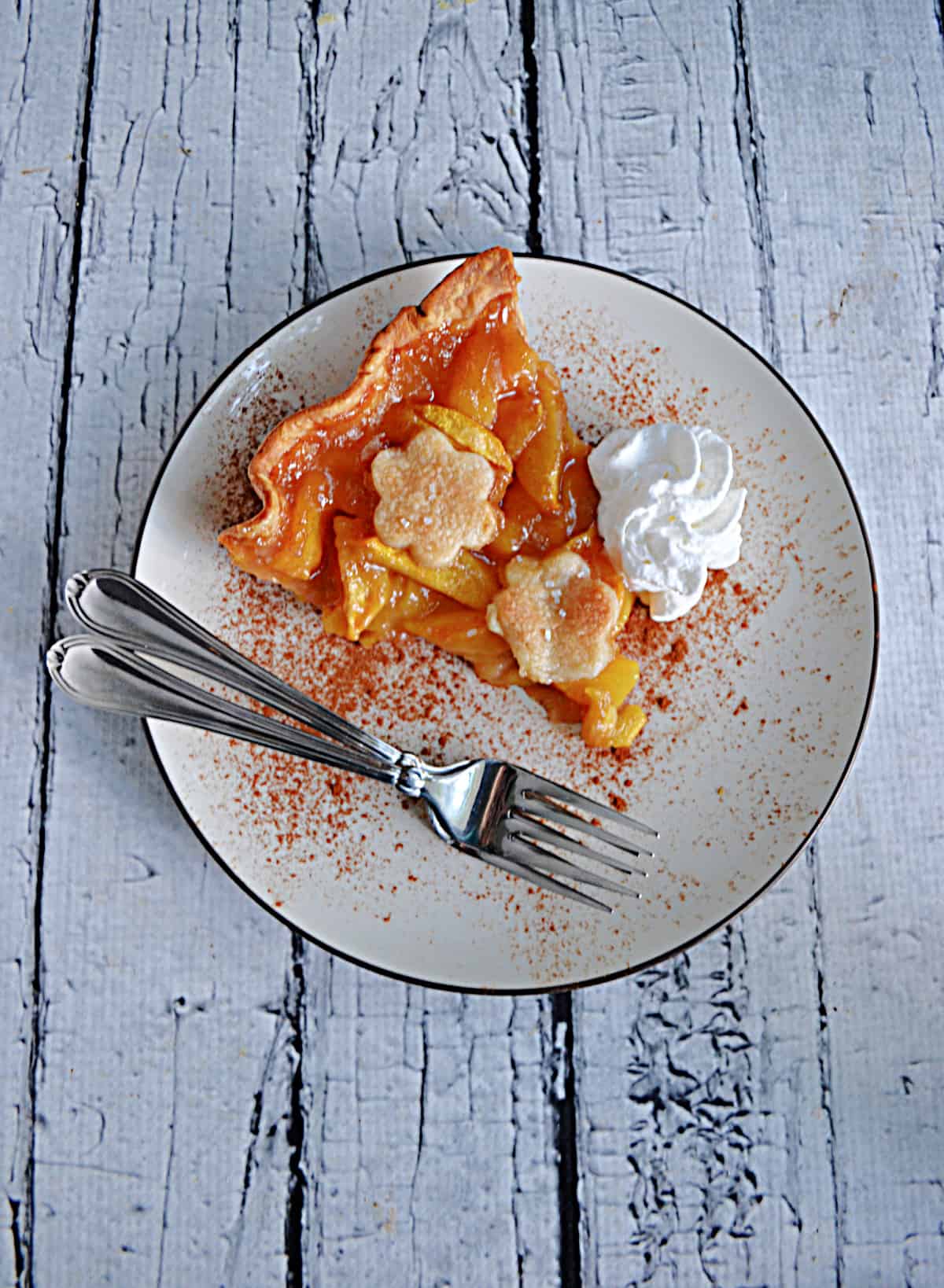