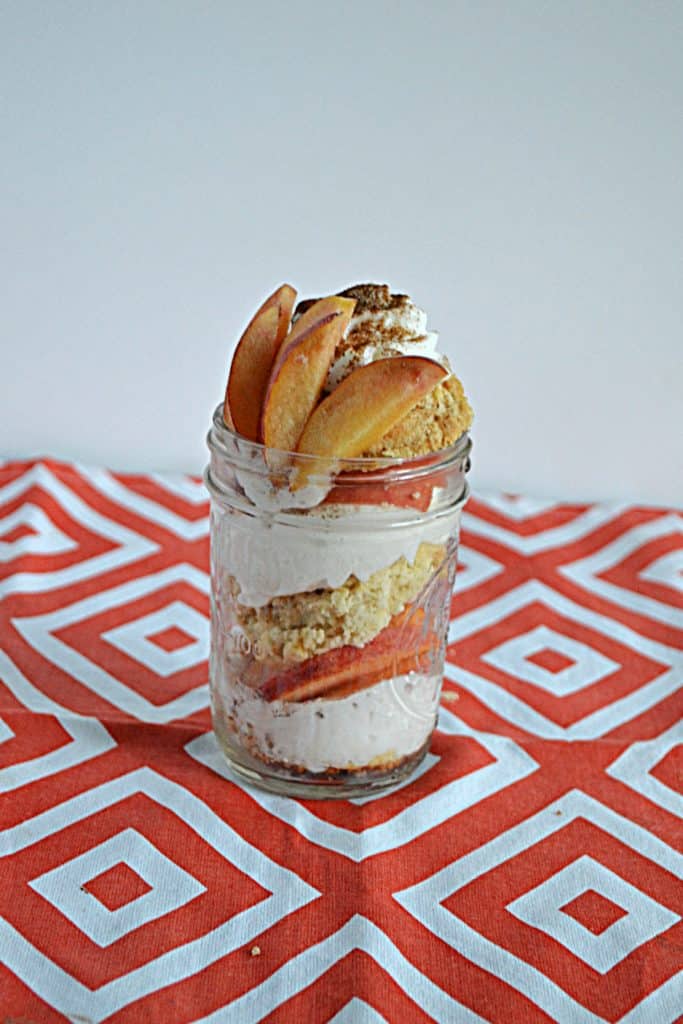 Last week I got a box of peaches.   I was super excited because it's been a while since I've had a decent peach and these looked amazing.

I came across a recipe for fruit shortcakes that looked easy and delicious.   The biscuits were made with powdered sugar and cinnamon which isn't normally how I would make my shortcake biscuits but it sounded good and I was sold.

I figured I could whip up a batch of my homemade cinnamon whipped cream as well to go with the shortcakes.   That would give a little spice to balance out the sweetness.

To make the shortcake biscuits combine the flour, powdered sugar, baking powder,  salt, and cinnamon together in a bowl.

Cut the butter into pieces and rub into the flour mixture until a crumble forms.

Add the milk, heavy cream, and vanilla and mix until a dough forms.

Scoop the dough onto a parchment paper lined cookie sheet and bake for 15 minutes.

While the biscuits bake wash and thinly slice the peaches.  Set aside.

To make the whipped cream beat the heavy cream with the sugar,  vanilla, and cinnamon until it becomes thick and soft peaks form.

To assemble the shortcakes cut each biscuit in half. Place a large dollop of cinnamon whipped cream in the center and top with peach slices. Place the other half biscuit on top, add a touch more whipped cream, and place a slice of peach on top. 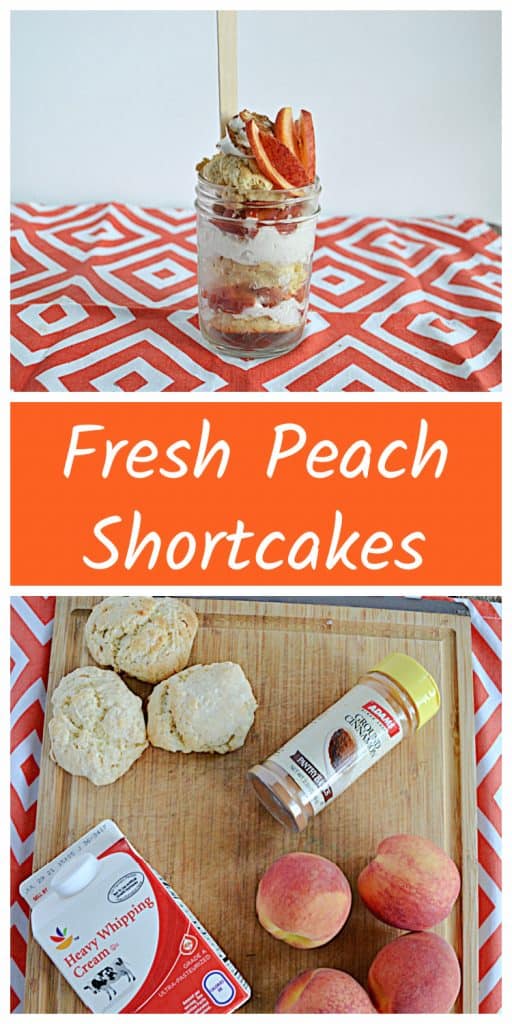 I love the flavor of the cinnamon in these shortcakes.   I actually used my homemade cinnamon extract in the whipped cream but I know that not a common extract so I wrote the recipe using regular cinnamon.

However, if you do have cinnamon extract around the house using a teaspoon of that and a teaspoon of vanilla extract in the whipped cream makes it out of this world delicious.  It pairs so nicely with the sweet, juicy peaches.

Do I have to make biscuits from scratch?

No, you can totally use a biscuit mix and just add a few tablespoons of sugar to it.  You can also buy a store bought pound cake and cut it into slices and use that as well.

Can I add other fruits?

You can add any fruit you want.  Since this shortcake has peaches I would recommend adding other stone fruits like cherries or plums to this dessert.

Can I buy whipped cream instead?

You can but you won't have that cinnamon flavor which really makes this dessert something special.  In a pinch you could use store bought whipped cream and just sprinkle it with cinnamon.

Can I make these ahead of time?

You can certainly make the biscuits up to 2 days ahead of time but don't assemble them until right before you eat them. If you are having them at a party it's fun to slice the biscuits and put them out to make a shortcake bar with different fruits, whipped cream flavors, and even caramel and chocolate sauce then people can build their own. 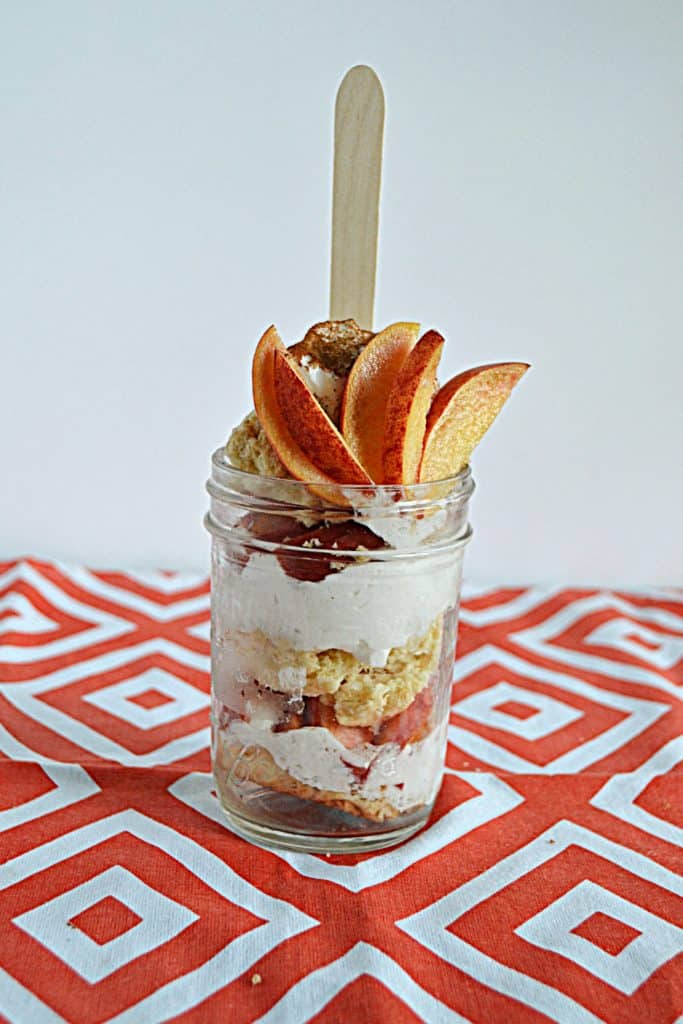 I was super excited to dig into my peach shortcake and the first bite did not disappoint!  The biscuits are a little crunchy on the exterior but have a wonderfully soft interior.

The peaches are sweet and juicy and work so well with the cinnamon spiced whipped cream.  The whole dessert just screams summer.

If you aren't a huge fan of cinnamon you could also use nutmeg in the whipped cream instead.   Depending on the sweetness of your peaches you may want to add a tablespoon or two of sugar to them.

If you’ve tried my Fresh Peach Shortcakes or any other recipe on Hezzi-D’s Books and Cooks please take a minute to rate the recipe and leave a comment letting me know how you liked it. I love hearing from you! You can FOLLOW ME on:

Recipe adapted from The Stay at Home Chef 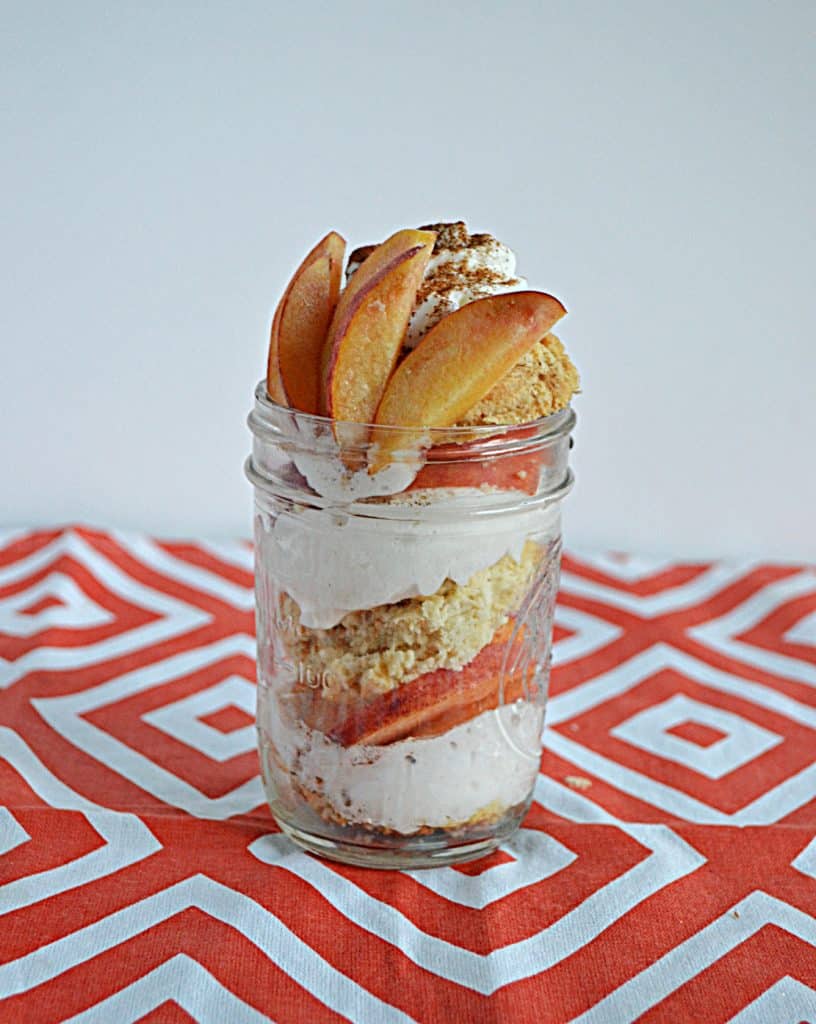 Farmer’s Market Week is always the first week in August. Whether you have a great local farm stand or market, are a member of a CSA or purchase your fruits and vegetables at the supermarket, follow our Pinterest board, for great recipes including those for appetizers, drinks, breakfast, lunch, dinner, dessert and more.