Butterscotch Pear and Pecan Dumplings take a delicious ripe pear and stuff it with pecans, cranberries, and chocolate then wrap it up in a flaky crust and drizzle it with caramel sauce. 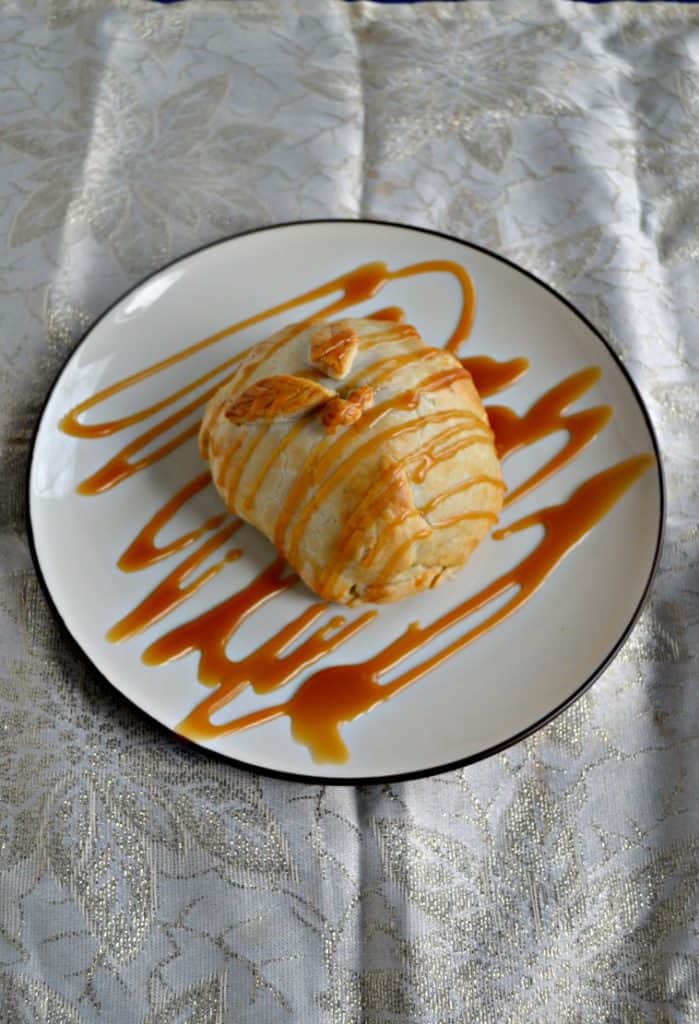 I was sent a box of Melissa's Produce but all opinions are my own.

This week the ingredient Melissa's Produce is highlighting is Butterscotch Pears.  Butterscotch Pears are imported from South Korea.  These pears are known to be juicy, crisp, and sweet with a texture like apples.  The skin is thin as well so every bite tastes like pure pear.   My toddler doesn't eat regular pears but I'm pretty sure he was convinced these were apples because he ate a ton of them!

The recipe for this week is Butterscotch Pear and Pecan Dumplings.   I don't know about you but I love a good dumpling.  There's something about a sweet and soft fruit wrapped in a flaky, buttery crust. This recipe takes it to a whole new level because it's stuffed with goodies!

The original recipe called for the pears to be stuffed with brown sugar and pecans but because it's the holidays I added in some chocolate chips and dried cranberries too.  I figured that would be the perfect compliment to these pears.

For this recipe you will need:

The pears are huge so even with cutting them in half and stuffing them you could easily share a pear half with someone else.  To start simply cut the pears in half and scoop out part of the center.   I'm glad I made a bigger hole so that I could stuff more into these pears.

Then I made the dough.  It's a really basic dough recipe and reminds me of making pie crust.  I mixed everything together until it just sticks together and then refrigerate for at least an hour.

The last thing to do is make the filling.  The original recipe combines butter, brown sugar, and pecans which I know would be fabulous but I wanted a little bit more.  I added in dried cranberries for some tartness and some chocolate chips because who doesn't like chocolate? 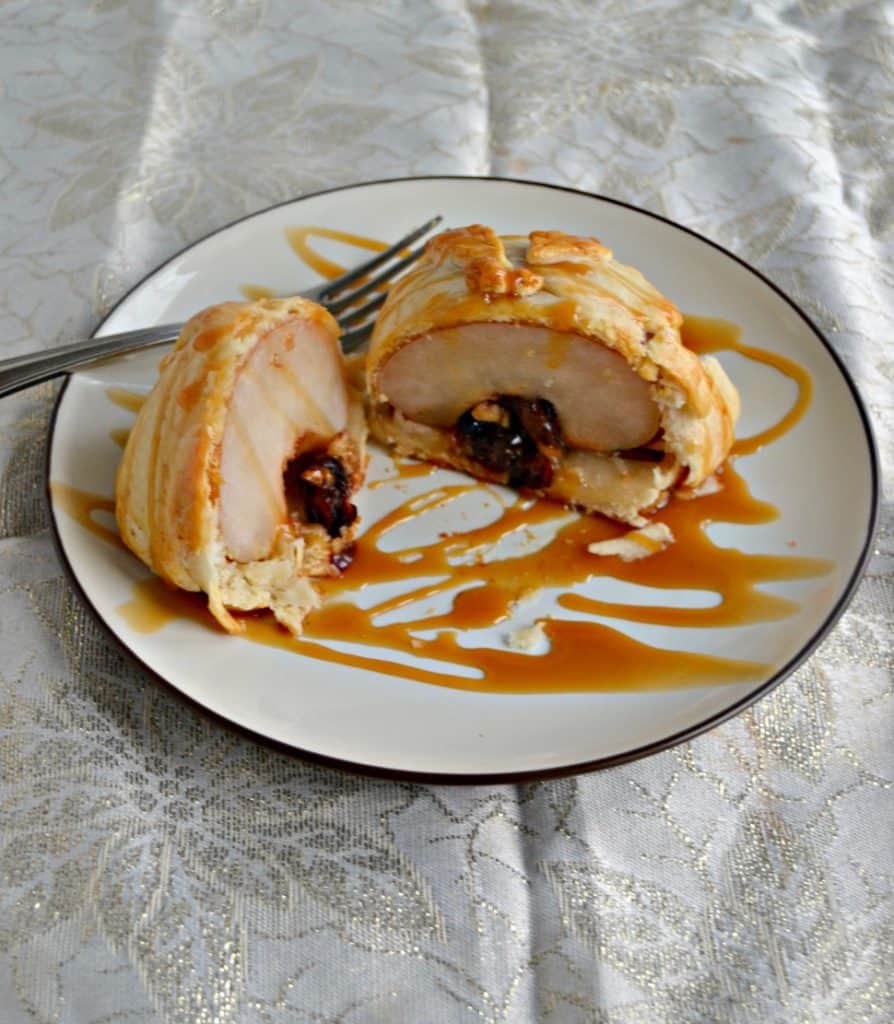 I rolled out the dough and cut it into six pieces.   Then I placed a pear half on top of each dough.   Carefully I spooned the filling mixture into the scooped out hole in the pear until it was full.  Then I wrapped the dough around each pear, sealed it, and placed it face down on a baking sheet.

If you have extra dough you can make decorations to put on your pear.   I cut out little leaves and berries to put on top and it was perfect.   The dough baked up golden brown and looked lovely.

While you can make your own caramel sauce to drizzle on top I just used my favorite jarred sauce and it was the perfect topper for this dessert.   The pears soften but are still firm and hold their shape, the crust is golden and crisp, and the filling is sweet, tart, and out of this world.  This may be the perfect holiday dessert.

For the Pâte Brisée:

For the Pear Dumplings: 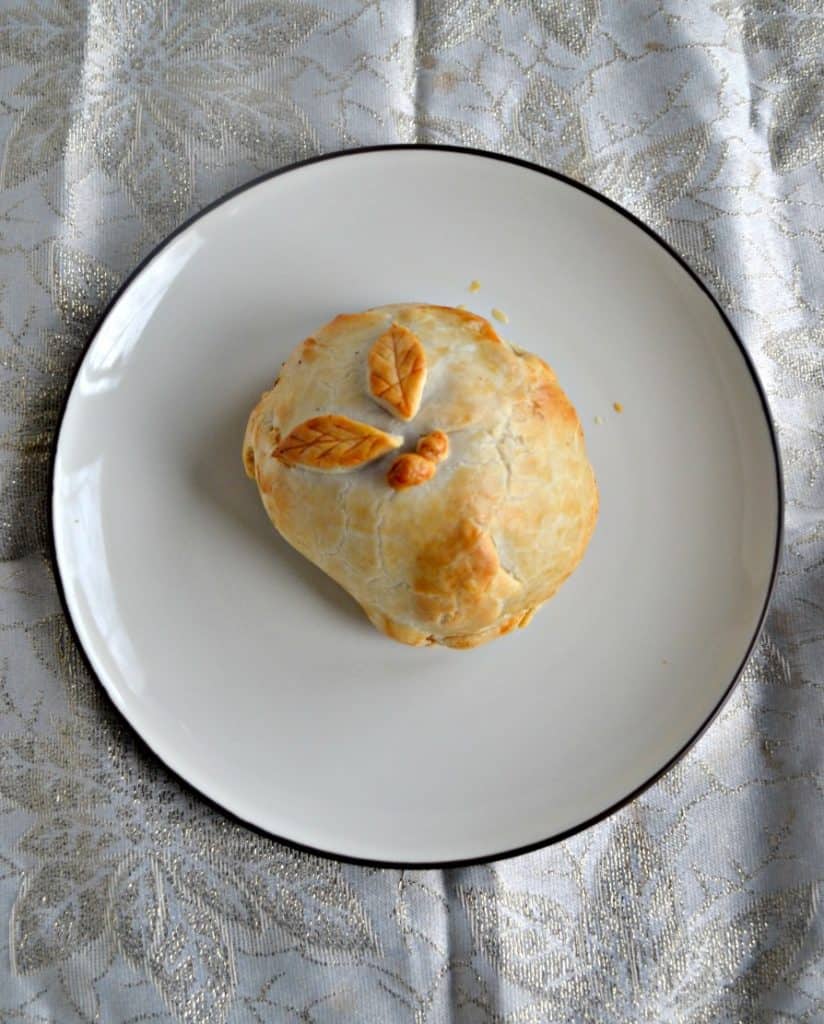