Chicken topped with a creamy sauce mixed with mushrooms, apples, and onions then served over top of a bed of spaghetti noodles with crispy bacon on top.  This recipe was originally published September 6, 2012. 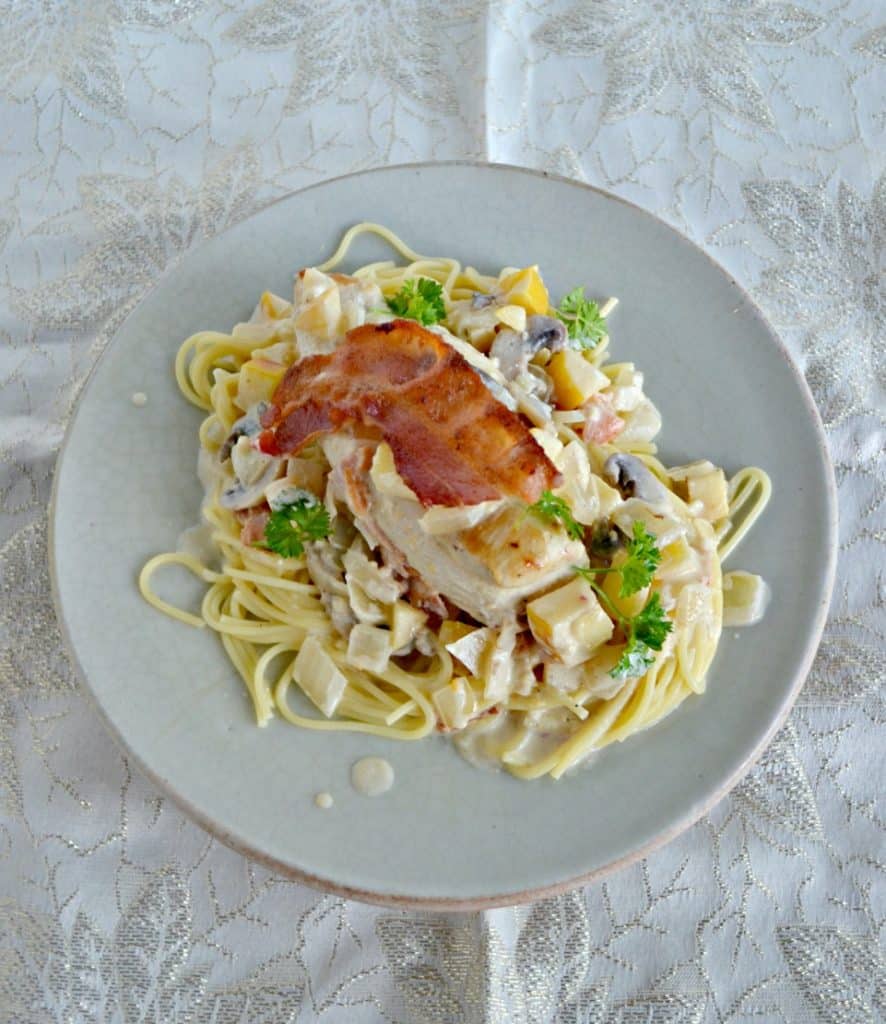 When I first saw the picture of this Country Club Chicken I was immediately interested.  A piece of chicken served over top of pasta in a cream sauce is one of my favorite ways to eat chicken.   Finding out that there was crispy bacon on top just made me want to try it even more.

I had most of the ingredients needed for this dish in my kitchen but I did need to buy mushrooms as they aren’t something I tend to keep on hand.  Everything else is generally in my kitchen.

For this recipe you need:

The bacon is cooked in a skillet until it is crispy and brown.  Then the chicken is sprinkled with salt and pepper and sauteed in the skillet with the bacon grease which adds a ton of flavor to it.

Next all of the vegetables are added to the pan and sauteed until softened.  Add in the liquids to make the sauce and then remove from heat and stir in the cheeses.   It makes a delicious looking cream sauce that is poured over top of the chicken.

The entire dish is baked in the oven.   While it’s baking the spaghetti is made and drained.  The chicken and sauce is served over top of the pasta for an awesome dinner. 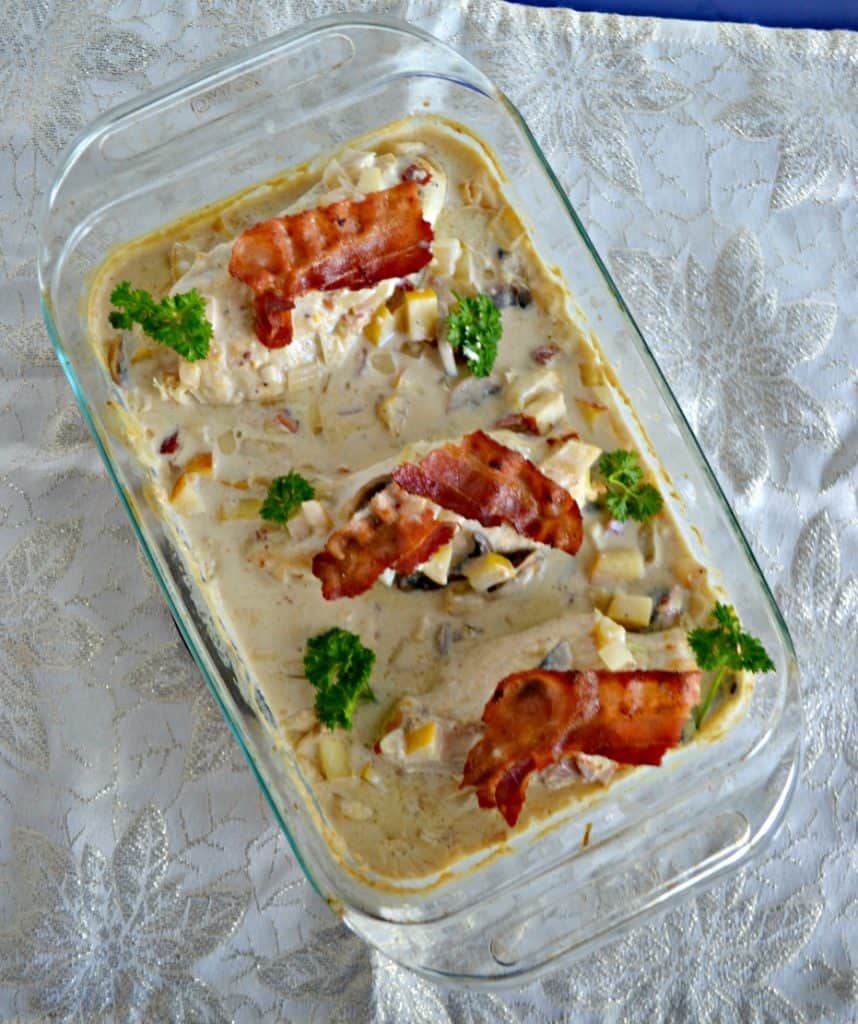 I can totally see why this would be served at a country club.   It looks a little bit fancy with the mushrooms and creamy white wine sauce.   The apples add a bit of sweetness but not too much.   The pasta underneath would be considered a side dish.

This is a great dish that can be made ahead of time and heated up if you were having it for company.  It’s also easy enough to make the day of and serve to guests because it doesn’t take a ton of time. 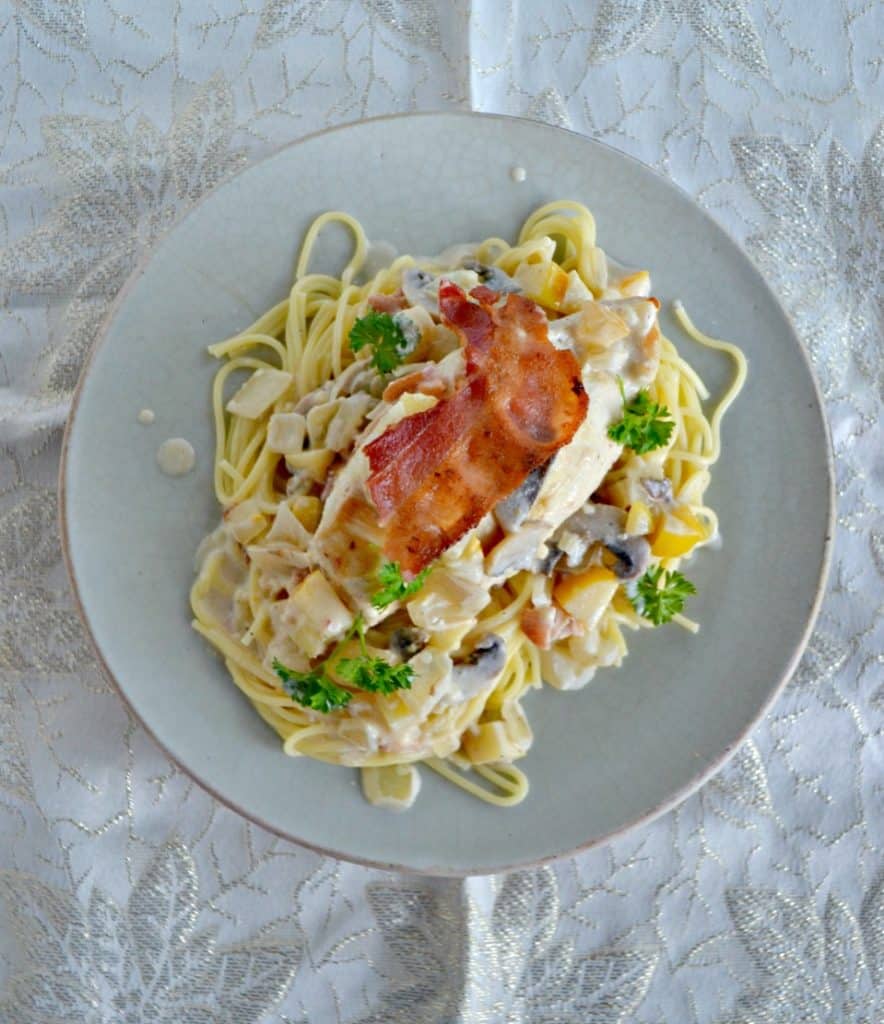