In the quiet of twilight, on an early autumn day, twenty-six-year-old Elisa Vandersteel is killed while riding her bicycle along the Charles River. It appears she was struck by lightning—except the weather is perfectly clear with not a cloud in sight. Dr. Kay Scarpetta, the Cambridge Forensic Center’s director and chief, decides at the scene that this is no accidental Act of God.

Her investigation becomes complicated when she begins receiving a flurry of bizarre poems from an anonymous cyberbully who calls himself Tailend Charlie. Though subsequent lab results support Scarpetta’s conclusions, the threatening messages don’t stop. When the tenth poem arrives exactly twenty-four hours after Elisa’s death, Scarpetta begins to suspect the harasser is involved, and sounds the alarm to her investigative partner Pete Marino and her husband, FBI analyst Benton Wesley. 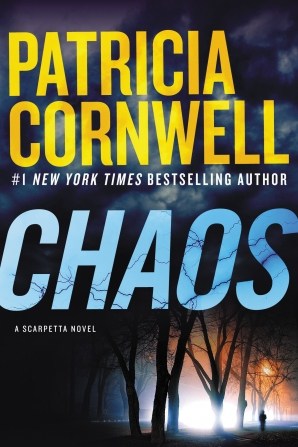 She also enlists the help of her niece, Lucy. But to Scarpetta’s surprise, tracking the slippery Tailend Charlie is nearly impossible, even for someone as brilliant as her niece. Also, Lucy can’t explain how this anonymous nemesis could have access to private information. To make matters worse, a venomous media is whipping the public into a frenzy, questioning the seasoned forensics chief’s judgment and "a quack cause of death on a par with spontaneous combustion."  (-synopsis)

Let me start by saying I love the Kay Scarpetta series.   I've been reading it since the beginning and I love the combination of interpersonal relationships with the suspense and thrills.   Each novel takes us through a series of deaths, threats, and what happens behind the scenes in a murder investigation.   Every single one of these books keeps me on edge until the end.

The book begins with Kay walking down the street on an extremely hot day.   She is sweating, unhappy, and things are about to get a lot worse.  She's supposed to be meeting Benton for dinner but that is interrupted when Marino calls and tells her they just received a 911 call about her fighting with her boyfriend.  While the caller was talking about one of her employees and not her husband, the bothersome thing is that the caller knew something very specific about Kay and her employee.

Marino probably wouldn't have thought much about it except Kay has been receiving a message everyday from someone named "Tailend Charlie".  This person knows things that no one should know about Kay and they are speaking to her in her father's voice.   All signs point to this being the work of Carrie Gretchen so Kay, her friends, and family need to be careful.

When Kay finally reaches Benton they both receive phone calls that make them cancel dinner.  Kay is whisked off to a crime scene in the park.  A woman appears to have been electrocuted and there is a lamppost nearby that has exploded but the pieces add up.  Kay and her team begin working on the scene when the FBI shows up.

By all accounts this is a simple accidental death in the park but when the FBI and Benton show up Kay knows something is really wrong with the crime scene.   As she and Marino go over the body they begin seeing many things that don't add up.   When she leaves the scene Benton informs her that a similar death has taken place down in Washington, DC and it's one of her closest friends.

Suddenly Benton is whisked off to DC to deal with the other death while Kay is racing to find out what happened to the woman in the park.   They must figure out what is happening and how before Carrie gets to close to their family.  As always, she has found a new male companion who is helping her plan and do her dirty work but her eye is always on the ultimate prize...Lucy and her family.

As it begins to be apparent what happened to the woman in the park Kay gets more and more agitated.   Everything comes to a head when she arrives home to a very scary scene.

Will Kay be able to stop Carrie and her companion in time?   Will Carrie finally have her ultimate revenge?  One thing is for sure, the ending of this book holds a surprise that no one saw coming!

I enjoyed reading this book as it kept me in suspense the entire time.  I could see where it was going to a point but everything finally comes together in the end.  I wish there had been a little more interaction with Lucy in this book since Carrie is generally targeting her, but otherwise it was a thriller as I kept wondering what happened to the victims.

We also see a new relationship form in this book between an unlikely pair.   While there was some foreshadowing about the pairing in earlier books, I was surprised when it came out.

If you enjoy other books in this series, you will certainly enjoy this one as well.  If you have never tried the Kay Scarpetta series before but you like suspense and thrillers, this is a good book to start with.  The author gives enough of a background that you can follow the story without having read the others in this series, though it was much easier for me to follow since I was familiar with all of the characters.