Hannah of Rise and Shine was our October 2013 Daring Bakers’ hostess and she challenged us to bake our own double crusted savory pot pies. Using any from-scratch crust and filling we choose, we were allowed to get completely creative with our recipe, showing off the savory flavors and fillings from our own home or region. 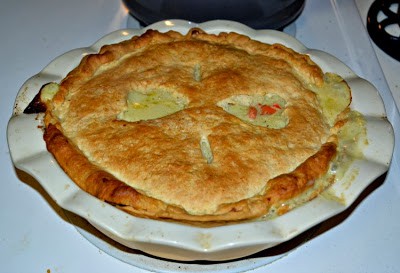 I was excited to make the pot pie because the only other time I've made one it wasn't so great.  I mean, it was edible, but it just wasn't great.  I think part of the problem was that I used a traditional filling with peas, which I don't like at all.  This time I went with all of my favorite vegetables including carrots, celery, onions, peppers, and spinach. 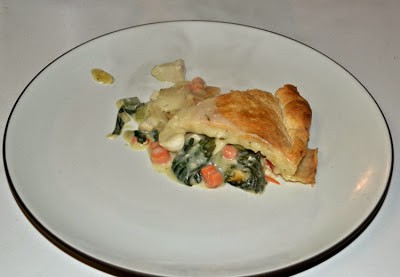 The inside filling was really good as well.  I made my own "gravy" then mixed it with the fresh vegetables and cooked chicken.  My husband enjoyed it as well and in fact told me this recipe was a winner and I should keep it in our rotation.

2.  Stir the water into the dough and mix quickly.  Turn the dough onto the table and knead 10-12 times or until it holds together.  Pat the dough into a disk then wrap in plastic wrap and refrigerate for an hour.

4.  Add the milk into the bowl and form a ball.  Turn the ball out onto a table and knead 6-8 times then return to the bowl.

5.  Roll out the pie crust bottom and place in a deep pie dish.  Set aside.

6.  Heat half the olive oil in a large skillet.  Add the chicken pieces and cook for 6-8 minutes or until it is no longer pink.  Remove from the skillet and place in a bowl.

7.  Heat the remaining olive oil in the skillet and add the carrots, celery, and onions.  Saute for 5 minutes.  Add in the peppers, salt, and black pepper and cook for an additional 3-4 minutes.

8.  Add the garlic and spinach to the pan and cook until the spinach has just wilted.  Remove the vegetables from the skillet and place in a bowl.

9.  In a small bowl combine the butter and flour until a thick mixture forms.  Set aside.

11.  Heat the chicken broth in the skillet.  Once it begins to boil reduce the heat to simmer and add the butter and flour mixture.  Whisk until combined.

12.  Whisk in the half and half and thyme.  Remove from heat.  Stir in the chicken and vegetables.  mix well.

13.  Pour the chicken filling into the prepared pie crust.

14.  Roll out the biscuit pie crust to just slightly bigger then the top of the pie.  Place on top of the filling and crimp the edges to the bottom pie crust, sealing in the filling.  Cut a design in the top if desired. 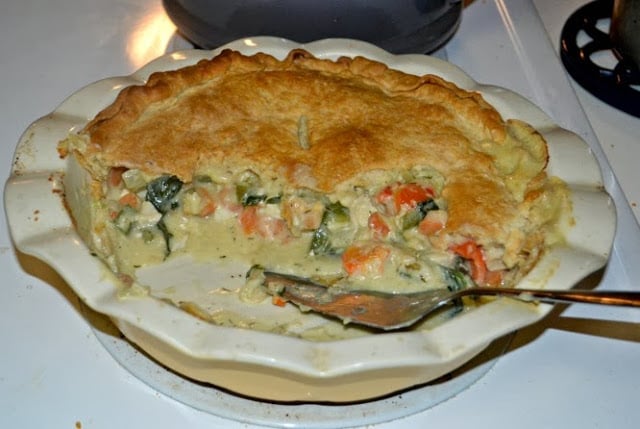