Chicken breasts were on sale at the market a week ago so I bought two pounds of them. I had them defrosting in the refrigerator and was trying to figure out what in the world I was going to make with them. I needed half a pound for a new football appetizer I was trying, but that left me with a pound and a half of chicken.

While I thought on it I rambled off what I thought I could make to my husband. I suggested chicken soup, Crockpot chicken, or stir fry chicken. In a moment of genius he reminded me that I had a new chicken pot pie recipe that I’d wanted to try. Let me preface this with the fact that I’ve never made a chicken pot pie in my life because I don’t really like them all that much. I think it’s the peas. I HATE peas, but I had printed out the recipe because my husband loves pot pies and I wanted to make one for him.

It was cold and rainy outside so it was the perfect night for a pot pie. I started cooking at 6:15 figuring we would eat at 7:00. Boy was I wrong. I’m not sure if it was because a friend was over and I was distracted or if it just took a really long time, but we didn’t eat until 7:45. My husband loved the pot pie. He thought it was great, liked the flavors, but added that next time it needed more “gravy” or liquid in it. 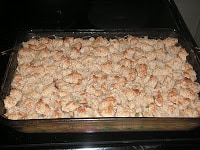 I thought the chicken pot pie was ok. I loved the crumbly topping and it had a nice flavor to it, but I couldn’t really get over the peas. Of course, my spoonful of pot pie was overflowing with peas. Other then the peas, it was actually a pretty tasty dish. Next time I think I may eliminate the peas and add in celery or something similar (and green).

I will say that when we heated this dish up the next day I liked it a lot more then I did the first day. I think it had time to sit and the vegetables really absorbed the flavor of the “gravy”. The peas didn’t taste nearly as bad on day two because they had the richness of the milk with a hint of butter to them. While it isn’t my favorite dish, I’ll be making it again for my husband’s sake.

3. For the topping: Combine flour, baking powder, salt, and peppers in a large bowl. Toss in the butter pieces and mix with fingers until it is crumbly. Stir in cheese then add milk until just combined.

4. Line a baking sheet with parchment paper. Spread topping out on the baking sheet. Cook 12-14 minutes or until it begins browning. Take out and set aside. (At this point I crumbled the topping into pieces).

5. For the filling: Heat 1 T. oil in a large skillet over medium heat. Add the onion, carrots, salt, and pepper. Stir well. Cook vegetables until tender. Transfer vegetables to the bowl with chicken and set aside.

6. Heat the remaining oil in the skillet and add the mushrooms. Cook five minutes. Stir in the soy sauce. Continue cooking until the liquid has evaporated and the mushrooms are brown. Transfer mushrooms to the bowl with the chicken and veggies.
7. Heat butter in the skillet. Add flour. Stir and cook for one minute. Slowly whisk in the chicken broth and milk. Bring to a simmer, scraping the bottom of the pan to get up the browned bits. Simmer another minute. Season with salt and pepper if needed. Remove from heat and stir in lemon juice and parsley. Stir in chicken and vegetables mixture and peas.

8. Pour the mixture into a greased 9 x 13 baking dish. Sprinkle the crumble topping evenly over the top. Bake at 450 until the filing is bubbling and the topping is browned, about 15 minutes.

**When reheating, heat the oven to 400 degrees. Cover the pot pie with foil and bake 10 minutes. Remove the foil and bake an additional 5 minutes or until the filling is bubbly.** 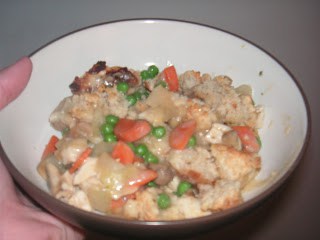 This recipe is linked to:
Mommy's Kitchen-Potluck Sundays﻿