I've been on the hunt for a new chocolate cupcake recipe because the one I normally use sticks to the cupcake liners and isn't too sturdy.  When I asked some foodie friends they suggested I check out Dorie Greenspan's cakes and cupcakes.  My brother bought me her cookbook Baking:  From My Home to Yours for Christmas last year and I've only made one recipe from it. 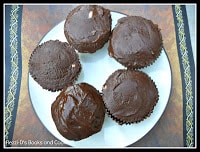 I went with the chocolate cupcake and ganache recipe.  The ingredients sounded similar to those in my other recipe but the batter looked much different.  It was fluffy and soft and it tasted almost like a mousse.  The resulting cupcakes are dark and delicious.  They are not overly sweet so it's easy to pair them with a sweet glaze or frosting.  The ganache gets firm on the outside but stays soft and silky underneath.  These will definitely be my go to chocolate cupcakes from now on.

3.  In the bowl of a stand mixer beat the butter at medium speed until it is creamy.  Add in the sugars and beat on medium for 2 minutes.  Add in the eggs one at a time beating for 1 minutes after each one.  Beat in the egg yolk and vanilla, scraping down the sides with a rubber spatula.

4.  Add in half the dry ingredients and mix on medium just until incorporated.  Then add the milk and mix for 2 minutes.  Mix in the remaining dry ingredients.  Fold in the melted chocolate with a rubber spatula. 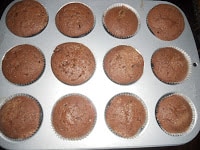 5.  Divide the batter evenly between the 24 muffin cups.  Bake for 22-25 minutes or until a toothpick inserted in the middle comes out clean.  Allow to cool for 5 minutes before removing to a wire rack.  Cool completely.

6.  To make the glaze melt the chocolate in the microwave in 30 second intervals.  Stir in the powdered sugar and then the cold butter.  Stir until the butter is melted.

7.  Glaze each cupcake with a spoonful of the chocolate ganache.  Allow to sit for 15 minutes to harden the glaze before serving. 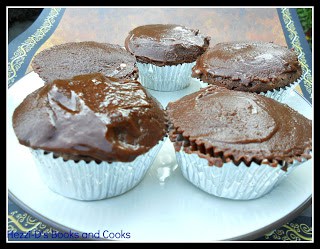