For month's I've been seeing all different types of pull apart breads.  From cinnamon sugar to pumpkin to jalapeno cheddar, pull apart bread has been all the rage.  I've had this bread on my list of things to bake and I finally got around to making the original this past week.  I have no idea why I waited so long, but believe me, I won't be waiting that long to make it again! 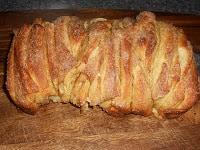 The process of making the bread was actually fairly simple.  I was worried that it was going to be endless time and directions but it really ended up being quite simple.  The needs to double twice like most yeast breads.  When it is rolled out the bread is slathered in butter, cinnamon, and sugar and then stacked into thirty-six pieces.  That means the sugar mixture is in between each of the 36 pieces.

The bread baked up much bigger then I expected.  The top and sides were golden brown and crispy while the inside was soft and buttery.  The cinnamon and sugar gave a sweet flavor to the dough.  The bread was so good that I didn't have to put anything on it.  It was perfect as an after dinner snack as well as heated up for breakfast in the morning.  I can't wait to try some of the other combinations of the pull apart bread! 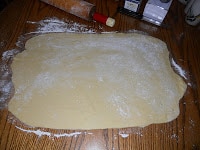 1.  In a large mixing bowl combine the flour, sugar, yeast, and salt.  Set aside.

2.  In a small bowl beat the eggs and set aside.

3.  In a microwave safe dish melt the milk and butter for 1 minute.  Stir well and then add in the water and vanilla.  Let the mixture stand for 1-2 minutes to cool off.

4.  Pout the milk mixture into the flour mixture and mix with a spatula.  Add in the eggs and stir the mixture until the eggs are incorporated into the batter.  The mixture should be sticky. 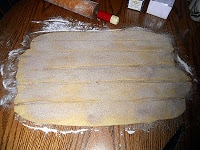 5.  Place the dough in a large, greased bowl.  Cover with plastic wrap and a clean kitchen towel.  Allow to double for 1-2 hours.

6.  After the dough has risen, melt the butter for the filling.  Combine the cinnamon and sugar in a bowl and set aside.  Grease a loaf pan and set aside. 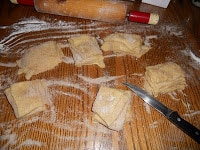 7.  Deflate the risen dough and add 1-2 tablespoons of four into the dough.  Use a rolling pin and roll the dough into a 12 inch by 20 inch rectangle.  Use a pastry brush and brush the dough with the melted butter.  Sprinkle with all of the cinnamon and sugar mixture.

8.  Slice the dough into six vertical strips.  Stack the strips on top of one another and then slice the stack into six equal pieces.  Layer the stacks in the loaf pan so that you can see the slices.  Place a kitchen towel over the dough and allow to rise for 45 minutes. 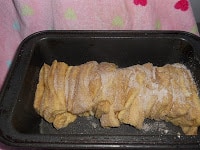 9.  Preheat the oven to 350 degrees.  Bake the bread for 30-35 minutes or until the top is golden brown.  Remove from oven and cool for 15-20 minutes on a wire rack.  run a knife around the edges of the pan to looses bread then invert the bread on a clean cutting board.  Flip the bread right side up onto a place and serve warm.

10.  The bread can be stored in an air tight container for up to 3 days. 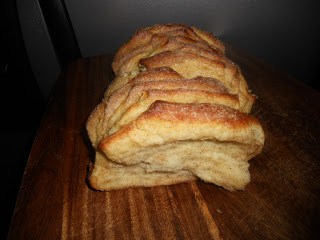