What if a man with the talent and patience to create perfect, undetectable copies of US hundred bills carries out his plan? Has a crime even been committed? What if he never spend a dime of the money on himself?

The last person social worker Mitch Adams wants to hear from is St. Louis Homicide Detective JoJo Baker, a man with whom Mitch shares a tangled past. Baker wants Mitch to see Lonnie Washington, a disabled African-American arrested for counterfeiting and armed robbery, believed to be suicidal while he sits in jail awaiting trial. The evidence points to an open and shut case, but Baker insists it's not so black and white. Reluctantly, Mitch agrees and discovers there is more to the story--more than enough to get them both killed. At first Lonnie won't cooperate, but as he begins to open up, Mitch comes to believe that the true criminal may not be the man behind bars, but the prosecutor who put him there--a man with far-reaching political ambitions, the approval of the public, and his very own Secret Service detail. With millions in perfect fake $100 bills up for grabs, Mitch's life hinges on the word of a counterfeiter, the greed of a prosecutor, and his refusal to go down without a fight.  (-synopsis) 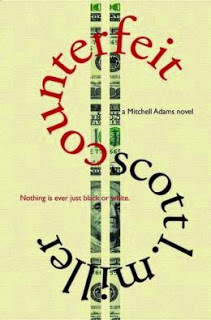 The book opens with Dectective JoJo Baker hunting down Mitch Adams for a favor.   He wants him to speak with a man named Lonnie Washington who is in jail for counterfeiting and shooting a pregnant security guard in a botched robbery.  Dectective Baker is convinced that while Lonnie is the counterfeiter, he didn't shoot the woman.   He tells Mitch that Lonnie is suicidal and he wants him to speak to him.   Mitch isn't sure and asks to think on it.

Later on Mitch is at City Hall and hears two men whispering in the bathroom about the counterfeit money.   They seem to know more then the police do and there is something familiar about their voices.   Once out of the bathroom Mitch hears the press conference about Lonnie Washington and decides to go to see him.

The first time Mitch meets Lonnie, Lonnie refuses to speak.   In fact, it takes almost a week of visits before Lonnie finally starts talking.   Once he starts opening up, Mitch begins meeting his family, his friends, and his enemies.   He's beginning to see who Lonnie Washington is, and he begins to think he's not the guilty one.  He also begins thinking that the guilty men may be hire powered people in the government as well as a big deal prosecutor.

With cryptic help from Detective Baker and Lonnie, Mitch must try to figure out the truth before it's too late.  Time is running out for Lonnie as he is beaten in prison and begins to lose hope.

I found this book to be a little hard to get into, but once I got a feeling for the characters I enjoyed it.   I didn't like that Detective Baker and Lonnie weren't really helping Mitch.  They both knew things but talked in a way that they never came out and said anything.   If I were Mitch, I would have been fed up and left the case.

I also liked that the novel shows that people aren't always how they seem on the surface.   Lonnie is viewed in two totally different lights in his very own neighborhood because of how people perceive him.  It was interesting to see and a good twist.  It's a decent book for thriller or suspense lovers.