For years, Hope Carmichael, survivor of a shocking child abduction, has lived a sheltered existence under the protection of her fanatically religious father. Now, liberated by her mother, Hope prepares to start life over as a normal kid in an Atlanta, Georgia, high school.

Normal, that is, until Hope meets Michael, a gorgeous emancipated teen with a mysterious past and a strong interest in Hope. And soon, Hope’s life is filled with questions. What’s behind the angry looks Hope gets from Lucas, leader of a gang of students? Who’s responsible for sending Hope a strange valentine inscribed with Bible quotations? How does this relate to the sinister business of human trafficking that operates on the periphery of Hope’s suburban world? And is Michael really a protector, or something more sinister—and just why does he seem so familiar?

In an epic narrative that takes readers from the back streets of Atlanta to the height of Vegas penthouses and beyond, Dark Hope introduces readers to The Archangel Prophecies, a new young adult saga that blends the feeling of Twilight with a vast mythological scope and moral urgency, as well as to Hope Carmichael—a young woman instantly memorable for her endurance, heart, and determination—and Michael, Hope’s dangerous companion who’s fated either to save Hope—or to kill her.  (-synopsis) 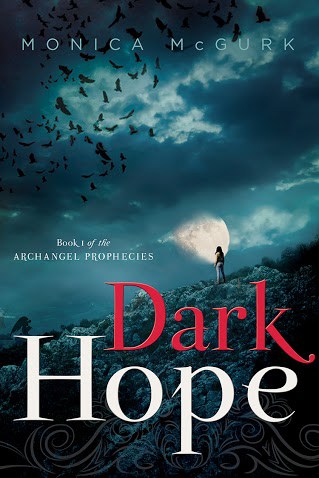 Dark Hope is the first book in the Archangels Prophecies series.  The book opens 10 years in the past with a little girl being kidnapped.   As her frantic parents search for her, the police find her in a motel.   She is sitting on the bed staring straight ahead.   It seems as though no harm has come to her except for the mark on her neck.  In the bathroom of the motel room is the remains of a human who is burned beyond recognition.   No one knows what happened and Hope has no memory of the events.

Fast forward ten years in the future and Hope is a 15 year old girl who has been sheltered from the world by her father.   After her abduction her father became obsessed with keeping her safe and it eventually led to her parents separation.  While her mother tried for custody, the court ended up giving full custody to her father because of her mother's work schedule.   For the past 10 years Hope has been sheltered from the world outside.  Her father takes her to and from school, she's not allowed out of the house after school, and she has no friends.

Hope finally asks the court if she can go back with her mother and permission is granted.  She finds herself at her mother's house with more freedom then she's ever had.  She rides the bus to school, she runs outside, and she has even made a friend.   Micheal is the gorgeous boy who introduces himself on the first day of school and then ends up sticking around.  Hope can't figure out why he befriends her, she only knows that he is the first friend she's ever had.

But Micheal is a mystery.   He leaves for days at a time without telling her, her had a perpetual headache, and he's very protective of her. Then in a twist of fate, Hope learns who Micheal really is.   While she has a hard time believing him, she soon finds herself in a world of mythological people she didn't know really existed.   It turns out everything is related to the mark on her neck.  The one she received when she was abducted years ago.   As time is running out, Hope must decide if she truly trusts Michael or if she needs to run from him.   The only problem is, there's more then one group of people looking for her and their motives may be worse then Micheal's.

I found this story to be fast paced an exciting from start to finish.   I often have a hard time getting into books but this one grabbed me from the start with Hope's abduction and the mysterious mark on her neck.   I found Hope to be a strong young woman.  While she was sheltered for so many years I found it wonderful to watch how much she cares for the people she befriends.   She is a smart girl who does what she can for others. I also found the underlying religious undertones to be fascinating.   There are hints of it throughout the book but towards the end everything comes together in a light bulb moment where everything finally makes sense.  The only part of the book I didn't like was the cliffhanger ending!   I hate having to wait for the next book to come out but you better believe I'll be purchasing it as soon as it comes out so I can find out what happens to Hope and Michael!

I was selected for this opportunity as a member of Clever Girls Collective and the content and opinions expressed here are all my own.