When I saw this recipe for a new fettuccine dish that had a sauce made of creme fraiche and Asiago and Parmesan cheeses I was immediately sold.  I love the bite from the Asiago cheese and thought it would taste great in a creamy sauce.  I also like that the  pasta dish is baked and the flavors had time to bake into the fettuccine.

The sauce thickens up in the oven but it's not heavy.   The Asiago really shines through and the thyme adds a nice flavor.  This is a rich and creamy pasta dish that is reminiscent of alfredo but with more distinct flavors.  It was easy to make and I'll be keeping this one on file for later.

2.  Cook the fettuccine according to package directions.  Drain the pasta reserving 1 cup of pasta water.

3.  In a large bowl combine the Asiago, creme fraiche, Parmesan,  half and half, thyme, salt, pepper, and nutmeg.  Add in the cooked fettuccine and pasta water and toss to coat.

4.  Place the pasta in a buttered 9 x 13 pan and sprinkle with  any remaining Asiago and Parmesan plus parsley.  Bake until the top starts turning brown, about 25 minutes.  Let sit for 5 minutes then serve. 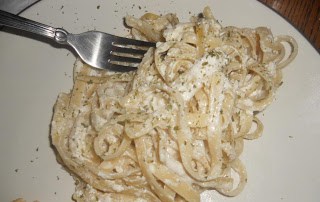