I’ve been in the market for some new crock-pot soup recipes. Even when specific recipes aren’t made for the crock-pot I can generally adapt them so that they can become crock-pot recipes. I recently came across a recipe for chicken enchilada soup. I already have a recipe for taco soup, but since I love enchiladas I was willing to take a chance on this Mexican soup.

I put most of the ingredients in the crock-pot before I went to work in the morning. Even before I left the house it began smelling like a spicy enchilada. By the time I got home in the evening I felt as though I was walking into a Mexican restaurant. The smell itself was mouth-watering. I grated some cheese, chopped up the cilantro, and served it in a bowl topped with tortilla chips. 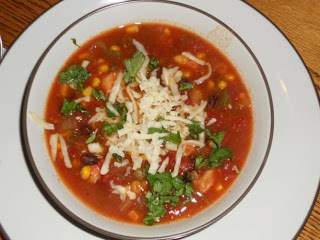 This is a great alternative to taco soup which uses ground beef. It is a spicier soup that has pieces of chicken, vegetables, and lots of cheese in it. The soup packs a spicy punch and was like a Mexican flavor explosion in my mouth! I like the way that part of the cheese is incorporated into the soup instead of just laying on top. It really thickens up the soup and makes it more of an enchilada consistency. The first day we had the soup with side salads and bread. The second day we had this soup I served it with cheese quesadillas which was the perfect accompaniment.

2. Heat the oil in a small skillet over medium heat. Cut the chicken tender into 1 inch pieces. Put the chicken in the skillet and sauté until all the pink is gone on the outside (about 5 minutes) but they chicken is not browned.

3. Put the chicken into the crock-pot. Add in the chicken stock, tomatoes, jalapenos, green pepper, onion, and garlic. Stir until well combined. Then add in the black beans, corn, and tomato paste. Mix well. Add in the spices and stir until combined.

4. Shred 4 oz. of pepperjack cheese and stir into the soup. Cover and heat on low 8 hours.

5. Shred the remaining pepperjack cheese and chop the cilantro. Pour soup into a bowl and top with the cheese, cilantro, and tortilla chips. 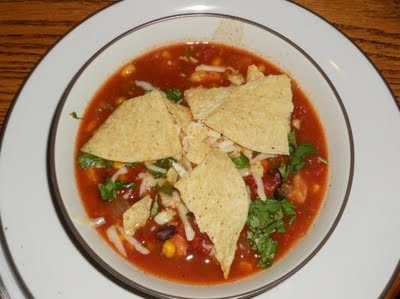 **This soup is very spicy. If you do not like things that are spicy please make the following modifications. Substitute a 4 oz. can of green chilies for the jalapenos. Substitute cheddar cheese for the pepperjack. This makes for a much milder soup.