It was another great week of vegetables for our CSA from Goodness Grows.  This week we received 4 zucchinis, 2 yellow squash, a large bag of beans, a couple of leeks, a bag of potatoes, mint, cilantro, onions, and paneer.  Then because they didn't have the cucumbers they expected to have I got to chose one thing from their farmer's market table!  There was a lot to choose from but when I saw the beautiful head of cabbage I had visions of these Korean Style Beef Tacos and that's exactly what we had for dinner that night! 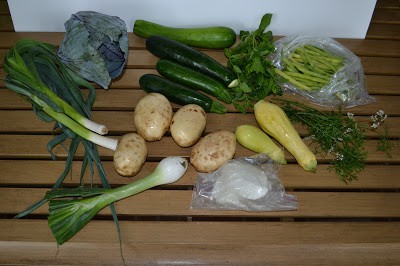 As it turned out, the vegetables we received went perfectly with what I had planned for our meals this past week.  I used the paneer, onions, and part of a zucchini over top of greens in a Fried Paneer Salad.  I used the mint to make mint iced tea and mojitos.  Then I came to the potatoes.  I love potatoes.  Literally love them and could eat them mashed, fried, baked, sauteed, anyway you make them I will eat them. 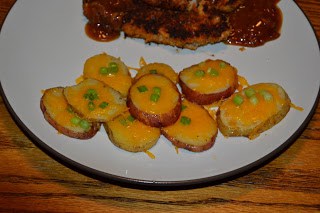 I've had a recipe for loaded potato rounds sitting around for a few weeks and these potatoes looked perfect for it!  I sliced the potatoes into ¼ inch rounds then brushed them with butter and put the toppings on!  I only used cheese and green onions, but bacon and sour cream could be used as well.

2.  Brush both sides of each potato round with melted butter and place on a cookie sheet.  Sprinkle with half of the salt and pepper.

4.  Remove from oven, sprinkle with cheese and green onions, and bake for 5 additional minutes or until cheese is melted.

5.  Serve with sour cream on the side if desired. 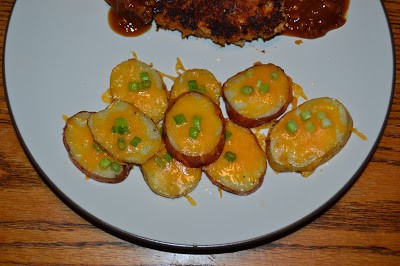 Then I finished up the vegetables by making Diced Vegetables with Demi-Glaze as a side dish.  I used a leek, zucchini, squash, potatoes, peas, carrots, and celery.  The veggies get very tender and the demi-glaze is amazing.   It's rich and flavorful and tastes great with the veggies.  I'd reduce the time I cooked the vegetables but otherwise it's a great side dish. 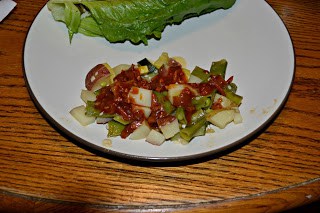 1.  To make the demi-glaze heat the oil in a medium saucepan over medium high heat.  Add in the leek, carrot, and celery.  Saute for 10 minutes.

2.  Stir in the flour and cook for 2 minutes.  Add tomato paste, garlic, broth, and wine.  Simmer for 5 minutes.

3.  Add pepper and thyme, reduce heat, and simmer for 30 minutes.  Remove from heat and cool.  (The recipe said to discard solids but I liked the glaze as it was.)

4.  To make the veggies heat the sesame oil in a large skillet over medium heat.  Add the cumin, cayenne pepper, and potatoes.  Saute for 10 minutes.

6.  Divide the vegetables among four bowls and drizzle with the demi-glaze. 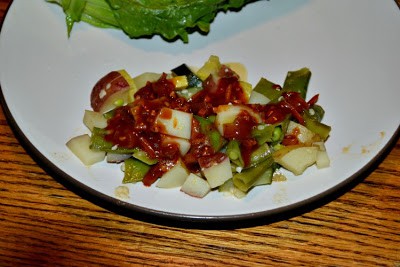