Since the age of ten, Mia has lived under the iron fist of the fundamentalist preacher who lured her mother away to join his fanatical family of followers. In Edenton, a supposed “Garden of Eden” deep in the South American jungle, everyone follows the Reverend’s strict but arbitrary rules—even the mandate of whom they can marry. Now sixteen, Mia dreams of slipping away from the armed guards who keep the faithful in, and the curious out. When the rebellious and sexy Gabriel, a new boy, arrives with his family, Mia sees a chance to escape.

But the scandalous secrets the two discover beyond the compound’s façade are more shocking than anything they ever imagined. While Gabriel has his own terrible secrets, he and Mia bond together, more than friends and freedom fighters. But is there time to think of each other as they race to stop the Reverend’s paranoid plan to free his flock from the corrupt world? Can two teenagers crush a criminal mastermind? And who will die in the fight to save the ones they love from a madman who’s only concerned about his own secrets?  (-synopsis from Goodreads) 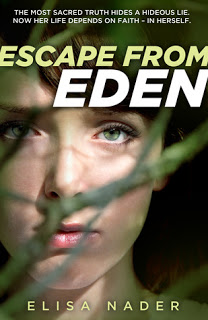 I had a hard time getting into the book at the beginning.  I thought that the people in Edenton were ridiculous and I couldn't imagine staying in a place where there is one person telling you what to do all of the time.  Then the character of Mia really began to develop and I saw that she didn't want to stay in Edenton.  She felt the same way I did about the town and she wanted to get up so as not to be stuck doing whatever the Reverend told her to do.

Then Gabriel comes to Edenton.  He's tall, dark, and takes Mia's breath away.  He's also defiant, outspoken, and even tries to escape one night.  There's an instant connection between the two and soon they are planning their escape from Edenton.  Mia only has one request; she wants to take her 6 year old brother, Max, with them.

But then they are both invited to Prayer Circle.  Prayer Circle is supposed to be the time when boy and girls become men and women and are allowed to start dating and courting each other.  The only problem is, Prayer Circle is not what it appears to be.  In fact it's something so scandalous, so over the top, that no one can even talk about it when they come back.

As Gabriel and Mia grow closer they learn not only about the Reverend's secrets, but also about secrets they have been keeping from each other.  When the end comes it's total insanity and not everyone comes out alive.  The entire town of Edenton reminded me of Jonestown on several different levels, though I'm sure Jonestown didn't have the same secret as Edenton.

*I received a copy of this book for my honest review.*