Can One Person Upend a Prophecy as Old as Time?

Hope Carmichael is on the run. The only question is, from whom?

The mark on her neck has branded her as part of an ancient prophecy, the Bearer of the Key. But the Fallen Angels have misunderstood and think Hope is their long-awaited way to regain Heaven by force. Now Hope is chasing down the artifact that could open Heaven’s Gates, while seeking to destroy it before the Fallen catch up with her. Will the Triad crime ring track Hope and exact their punishment before she gets the chance? Is the ragtag band of angels surrounding her now there to protect her, or imprison her? And will Michael, the Archangel sworn to defend Heaven at all costs, be forced to deny his love for Hope and take her life, instead, so that the artifact won’t fall into enemy hands?

The epic narrative introduced in Dark Hope continues in Dark Rising as Hope crisscrosses some of the most ancient sites in Europe and plumbs the depths of history in search of the truth about the Key, herself, and love. Exploring themes of identity, fate, jealousy, trust, and forgiveness, Dark Rising’s mythological scope and moral urgency deepen as we come to understand the choices and consequences faced by a young woman determined to follow her heart and chart her own destiny.  (-synopsis) 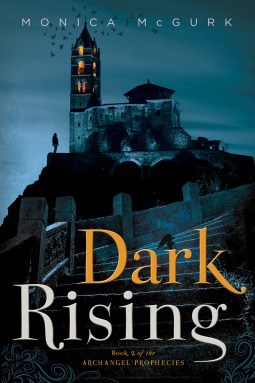 Hope is back in this second book of The Archangel Prophecies.   She learns she is the Bearer of the Key and along with angels Michael, Raph, and Enoch plus her guardian angel Herni, she must find the key and destroy it before the Fallen Angels can find it.

Hope takes the group to Turkey where they search the streets, churches, and places dedicated to the angel Michael.  The longer they are there the more agitated Michael becomes.   He is getting weaker the more he ignores the human world.  He is also trying to deny his love for Hope and this makes him become angry and close to losing control.

As the group goes to place after place looking for the "key" they are tracked by the Fallen Angels. After going out for a run and really thinking about being the Bearer of the Key and the prophecy, Hope realizes what the key is and what the gate is.  This realization devastates her to the core and suddenly she isn't so anxious to find the key after all.

Meanwhile, back in the United States Mona and Don are left to pick up the pieces of Hope disappearing for a second time.   They see footage of her in Las Vegas but that is all.  When a friend comes forward talking about human trafficking they become even more worried then they were initially.  The two have a love and hate relationship and it's tough to see how they can come together and then go their separate ways.  You can tell how much they still love each other but they don't know what to about it.

Back in Turkey Hope decides that they need to travel to the coast of Ireland.  It's here where Hope and Michael finally come face to face with their feelings for each other and an emotional scene ensues.   After that is the climax of the story and it is huge!  So many things happen at once.

I really enjoyed this book from start to finish.  Hope is a strong teenager who is doing what she thinks is best for Michael, herself, and the world.   She tries to hold it together and be strong but it doesn't always work for her.  There are times when she becomes upset with her situation and confused about Michael but she keeps pushing on.

Meanwhile, Michael is as old as time.   He is on Earth to do God's work and to keep humans at peace.  Being with Hope means he has given that up to help her find the key and to keep away from the Fallen.  Throughout this book he gets close to Hope then pushes away.  He's getting headaches and it's making him angry. He also can't stand to see the burn marks he put on Hope's skin.

There are several big scenes at the end of this book, both in Ireland and in the United States.   During one scene I had a huge emotional reaction and cried so hard because I had become emotionally attached to the book and the characters.   I was very upset at the end of this book but I think that it leads the door open for so many things to happen in the third book.  I can't wait to see how it all ends!

At the closing of this book the Earth is in turmoil and people are going crazy.  Everything has turned upside down in Hope's world but she's still trying to hold it together.