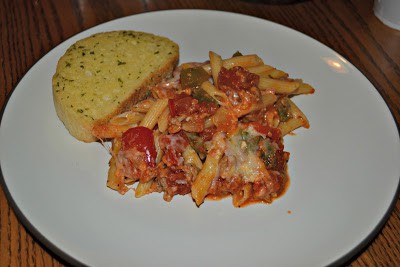 The original recipe called for a pound of sausage, 3 cups of cheese, and a pound of pasta.  That was way too much pasta for the two of us and it had way too much fat in it so I adapted it.  I used half the sausage and made it turkey sausage, halved the cheese, and reduced the pasta.  I really enjoyed the outcome.

The sauce was slightly chunky and had a lot of spices in it.  The roasted peppers added a lot of flavor to the pasta and there was enough cheese to make the penne gooey and delicious.

2.  Toss the peppers with the olive oil, salt, and pepper.  Place the peppers on a baking sheet and roast for 20 minutes. 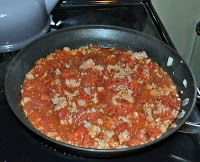 3.  Meanwhile, saute the Italian sausage in a large skillet over medium heat.  Add in the onion and garlic and saute for 3-4 minutes.

4.  Stir in the tomatoes, Italian seasoning, oregano, red pepper flakes, salt, and pepper.  Bring to a boil, cover, and reduce heat to low.  Simmer for 20 minutes.

5.  Take the peppers out of the oven and reduce the oven temperature to 375 degrees.

6.  Cook the penne according to the package directions.  Drain.

7.  Add the pasta, bell peppers, and 1 cup of mozzarella cheese to the sauce mixture.  Stir well to combine.

8.  Grease a 9 x 13 glass baking dish with cooking spray.  Add the pasta mixture to the pan and top with the remaining mozzarella cheese and the Parmesan cheese.  Bake for 20 minutes.  Remove from oven and serve hot. 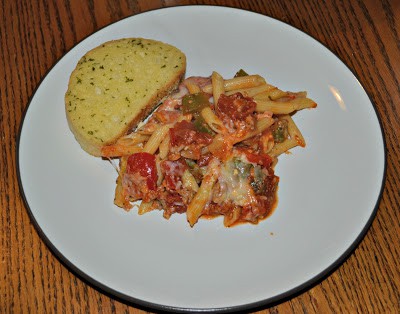