Flames and blood – the story of Eleanor's existence.

Eleanor survives, it what she does. But at what cost? She learns her past and sees the terrible and tragic history of her kind, the wreckage of fear and necessity spread across generations of innocent lives. It is enough to show her she is toxic, a cause of pain and destruction. For everyone’s own good, she will disappear forever.

But first, one last visit to Jamesford.

The sleepy Wyoming town mourns their lost child. The unremarkable girl who in life wanted only to be ignored is a celebrity in death, a tourist attraction, a legend. A mystery.

But not everyone thinks she’s dead. While some wait in hope for her return, others wait in ambush. (-synopsis) 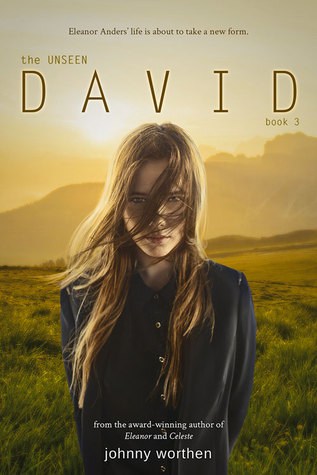 Eleanor is back in the third edition of The Unseen.   When she left Jamesford it was to a mass of destruction.  David's father had been killed, he was crumpled on the pavement, and Eleanor was a cat.   She was taken by Dr. Sikring.  Eleanor thought he was the enemy and holding her hostage but she couldn't have been more wrong.

Dr. Sikring nursed the cat back to health and when Eleanor finally decides to turn back into herself he is there to help.  He is in awe of her and not scared at all.  Together the two make plans for Eleanor to return to Jamesford and to see David again.

Eleanor is afraid because she knows people are still looking for her.  They don't believe that she perished in the fire and they are right.  The one who scares her the most is Zalarnik and his laboratory.  He wants her to do experiments on her and who knows what else but Eleanor won't let that happen.

She assumes another identity and returns home.  She's amazed by how much things have changed but also how similiar they are.   She plays the part of a researcher who is looking into the legend of Eleanor.  She talks with old friends, teachers, and those who used to know her.  Each day it's harder and harder to stay away from David until at least she can't.

But seeing David could ruin everything.   The people looking for her will know she's alive and they want her captured at any cost.  Is it worth it to see David one more time or will Eleanor keep her distance and watch him from afar?

This edition of The Unseen helped me to better understand the characters.  Eleanor starts out scared and afraid but with the help of Dr. Sikring she feels nurtured and loved again.  She knows there are good people out there. Dr. Sikring turns out to be a good guy who just wants to help Eleanor because she is a rare thing that he's been studying for years.

Eleanor is daring in this book and begins changing shape more frequently and not always at home.  I think she felt as though she had nothing to lose so she just went for it.  She changes for herself, to help her friends, and to stop those who are evil.  She is such a strong person and she wants what is best for everyone...including herself.

David is a strong figure in this book as well.  He keeps hope that Eleanor is alive in the world even though he isn't sure that she is.  In the year since she left he's brought up his grades, been accepted in to college, and has taken care of his sister.   His love for Eleanor is evident in this book.

Midge returns as a big character in this book.  She is the first person back in Jamesford Eleanor "outs" herself too and she is a great friend to her.  She wants to help Eleanor find David again and for them to be together.  She's willing to set up meetings, help her change, and drive her around.  She is an amazing and strong teenager who will do anything to help the ones she loves.

While a lot of this book focuses on Eleanor coming back, there is a lot of action once people think she is back.  There is a city wide man hunt for her at one point and Jamesford turns into a military city.  Will Zalarnick and his crew find Eleanor or will she be reunited with David for good?   Will she end her life as Eleanor or will she be on the run forever?

If you liked the first two books you'll like this one as well.  I feel like it's delves into the characters more and we find out who really cares for Eleanor and who doesn't.  We also learn more about her back story and where she came from.  It's a great paranormal young adult book.