In A Death in Vegas, the president of BenBugs, a company that specializes in beneficial bugs for organic gardening, discovers a young woman dead in his Las Vegas hotel suite. She had worked as a sexy lady bug at his convention booth—and he had nothing to do with her death. While that’s being investigated, the FBI raids his booth on a money-laundering scam that he knows nothing about, either. Soon, the coroner doesn’t have good news. The police and FBI are against him—and his wife cannot be found. He flees to find the answers.  (-synopsis) 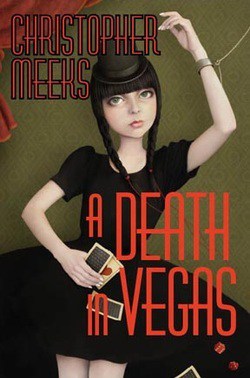 The scene opens at a bug convention.  Patton is selling his organic bugs along with his co-workers and a model named Chatterly who is dressed as a ladybug.   After a hard night of work, he heads over to a local hot spot only to see Chatterly again.   The two of the have dinner and she comes back to his hotel room for a nightcap.  While there she begins to feel ill and he allows her to spend the night.   When Patton wakes up in the morning he find Chatterly naked...and dead.

When he calls the police they think she died from her asthma.   That is, until they find ragweed in her inhaler.  Suddenly Patton is the number one suspect and the police are looking to arrest him.   When his wife comes to town he finds that the FBI is looking for her because she unknowingly laundered money for the mob.  Together the two of the are off and running, looking for clues that will tie the two problems together and find out who really killed Chatterly.

Along the way the rekindle the love that they thought was lost while trying to find out who Chatterly really was.   The two make a pretty good sleuthing pair and end up finding clues as to who killed Chatterly and why.  The only question is, will they be able to identify the killer and tell the police before the killer identifies them?

I found the beginning of the novel to be a little slow and the ending to wrap up too fast.   The middle was pretty exciting and flowed nicely.  I do think that Patton was a little out of his element but somehow was able to figure everything out on his own.  It was a little bit farfetched which I didn't really like but overall it was a decent mystery novel.