I love watching cooking shows.  To me celebrity chefs are more exciting then movie stars.  A few of my favorite cooking shows are Chopped, Sweet Genius, Cupcake Wars, and Top Chef.  If I had to choose my top 3 celebrity chefs that I would love to cook with or meet they would have to be Bobby Flay, Duff (who I did meet and did get to decorate a cake with!), and Alton Brown.  These 3 are pretty much my foodie heroes.

This week for our recipe swap, hosted by A Taste of Home cooking,  the theme was celebrity recipes.  The recipe I chose to send was Bobby Flay's Cuban Pork Chops.  They are easy to prepare and super delicious.  The recipe I received was Emeril's Sloppy Joes.

Of course when I received my recipe I didn't know what to think.  I really enjoy Emeril's recipes but the truth is I've never had a Sloppy Joe.  Growing up they weren't something my mother ever made and as an adult they are not something I've ever wanted to make.  Needless to say I was incredibly nervous about making them.  It didn't help that my husband doesn't really like them either and began a long and hilarious Facebook post about Sloppy Joes where people were appalled that I had never eaten one before.

Fast forward to Sunday when I actually made the Sloppy Joes.  Cooking the vegetables and beef together I was surprised by how good it smelled.  I then poured in the sauce ingredients and was slightly taken aback by how much sauce there was.  I ended up cooking the sauce down and adding some cornstarch to thicken it up.

I toasted the buns and then had my first Sloppy Joe.  It wasn't half bad!  After the debate that had been going on for the past several days I was really nervous about eating them but it turned out I shouldn't have worried.  Since I've never had one before I have nothing to compare it to but they tasted decent and I even ate a second one.  My husband had the leftovers over top of pasta the next day.

1.  Heat the olive oil in a large skillet over medium heat.  Add in the celery, pepper, and onion.  Saute for 5 minutes.  Add in the garlic and saute for an additional minute.

2.  Add the ground beef to the skillet, breaking it up as it cooks.  Season the beef with the salt, pepper, chili powder, and oregano.  Cook until the beef has browned.

3.  Add the Worcestershire sauce, brown sugar, tomato sauce, beef broth, and hot sauce to the beef mixture.  Bring the mixture to a boil.  Reduce heat to medium low and simmer for 20 minutes or until the sauce has reduced. 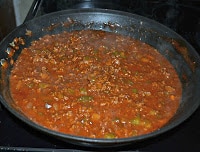 4.  Stir the cornstarch into 1 tablespoon of water.  Add to the Sloppy Joe mixture and stir well.  Heat for 2-3 minutes or until the sauce has thickened.

5.  Meanwhile, toast the hamburger buns in the oven.

6.  Spoon a half cup of the Sloppy Joe mixture onto a toasted bun and top with cheese.  Serve hot. 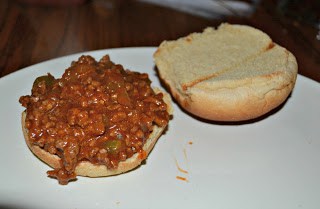