This weekend I had such a blast hosting a brunch that consisted mainly of ingredients found at the farmers market or were local.  Part of the fun was not really knowing what I was going to make until after I went to the farmer's market.  Going in I knew I would be making vegetable quiche but I had no idea what would be going into it. 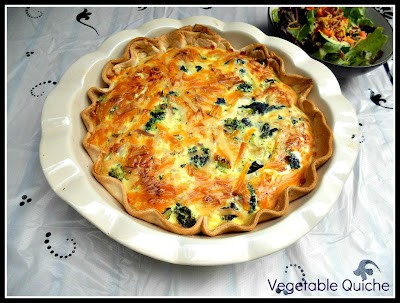 Once at the farmer's market I started looking for spinach as a base for the quiche.  As luck would have it no one had any spinach.  After asking around one of the ladies told me that mustard greens would hold up well in a quiche and have a similar texture to the spinach.  While the flavor is different she assured me I'd like it in a quiche.  Having never cooked mustard greens before, I simply went looking for other vegetables that would have gone well with the spinach.  I ended up with broccoli and onions. 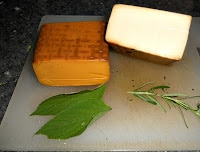 After that I went to a market that has local cheeses and picked out a smoked cheddar and a Swiss cheese.  I wanted to get some farm fresh eggs but they didn't have any so I settled for organic instead.  I then pulled some fresh herbs from my garden to go into the quiche as well.

I ended up cooking the mustard greens like I would spinach and put everything in a pie pan.  The resulting quiche was delicious.  The ingredients were fresh and so full of flavor.  Both my husband and I agreed it was one of the best quiche I've ever made and I will gladly make it again soon. 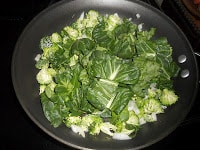 1.  Preheat the oven to 375 degrees.  Place the pie crust dough in a pie pan and crimp the edges.  Set aside. 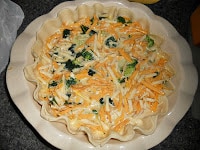 3.  Spread the vegetable mixture into the bottom of the pie crust dough.

4.  In a medium bowl whisk together half of the cheddar cheese, half of the Swiss cheese, eggs, milk, rosemary, sage, pepper, and salt.  Pour over top of the vegetable mixture in the pie pan.

5.  Sprinkle the egg mixture with the remaining cheese.

6.  Cook for 45-50 minutes or until the top of the quiche is golden brown and a knife inserted into the middle comes out clean.

7.  Allow the quiche to cool for 5 minutes on a wire rack before cutting.  Serve hot. 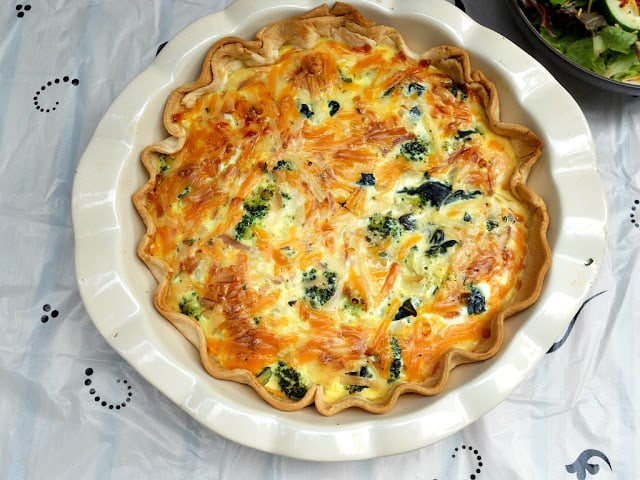