Jake Sawyer has lost everything; his business is in ruins and he is sinking under the weight of crippling debt and his wife has left him, taking their two children with her.

At breaking point, he is preparing to end it all when he witnesses a fatal car crash. In a futile attempt to save the driver, Jake discovers a case full of priceless diamonds and, immediately seeing his salvation, takes the case and flees to Europe without barely considering the consequences of what he has done.

A worldwide hunt for the diamonds ensues in which Jake has to evade both the police and the vicious mercenaries who are the true owners of the stones. Along the way, Jake will encounter murder, heartache and love as he desperately searches for redemption.

Finders Keepers is a nail-biting, fast-paced thriller that will have you hooked from the very first page.  (-synopsis) 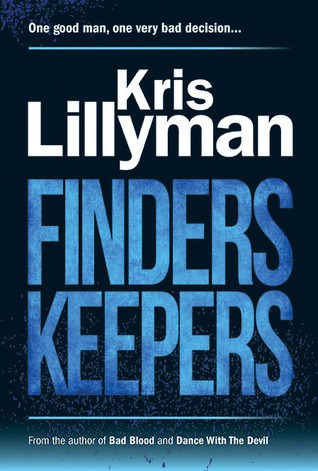 Jake is having a bad day.   He is in debt up to his ears, his wife and kids left him, and he's about to lose his business.   His last chance to get ahead is a contract that his buddy promised was his.   On the day of the contract signing he hops in his car and starts to the signing when a huge snowstorm hits.   He knows he is going to be late so he calls his buddy.  It turns out he's just been fired and isn't sure Jake is going to get the contract.  By the time Jake gets to the business they are closed and the contract went to someone else. Feeling like he is spinning out of control he starts home.

Jake stops when he gets to a bridge.   With no money, no family, and nothing to live for he decides to end it all.  As he climbs over the railing of the bridge and gets ready to jumps a car skids out of control behind him and crashes.  Jake runs to the car and finds a man dead.  He begins to panic and starts shivering.  Out of his mind he grabs the man's coat to warm up and then spots something on the floor.  It's a case filled with diamonds.   Without thinking Jake grabs the diamonds and leaves the scene.

Jake is now on the run with the diamonds.  He begins thinking of how he can sell them and settle his debts.  He also thinks he can win back his wife and kids if he only had money.  This sets him on the path of selling stolen diamonds for profits.   Jake thinks that he has it made...but he's wrong; dead wrong.

Peter is the wealthy man who has paid to get the stolen diamonds.  With his high powered job and connections he can sell them for much more then what he paid. In fact, once he sells the diamonds he'll be set for life.  The only trouble is he no longer knows where his diamonds are.   His driver and friend was killed and now the diamonds are missing.  He puts two of his best men on the case and tells them to do whatever they need to do to get the diamonds back.

Meanwhile, Jake begins selling the diamonds and is debt free for the first time in his life.  He begins to see the light at the end of the tunnel.  Will the diamonds make all his dreams come true?  Or will they cause him to lose everything that he had left?

I found this book to be fast paced from the beginning.  Jake is so depressed he isn't thinking clearly when he steals the diamonds.  All he wants is to get his wife and kids back.

Then there is Peter.  Peter is a devious man who won't let anything stop him from getting what he wants.   What he wants now are the diamonds and he'll do anything to get them back.

This is a good suspenseful book that will keep you on edge until the end.