Holy Shiitake Pizza from Mellow Mushroom starts with an amazing homemade pizza crust brushed with garlic butter and sprinkled with Parmesan cheese then is topped off with homemade sauce, cheese, caramelized onions, bacon, and mushrooms for the ultimate pizza pie.  This recipe originally published in December 2014. 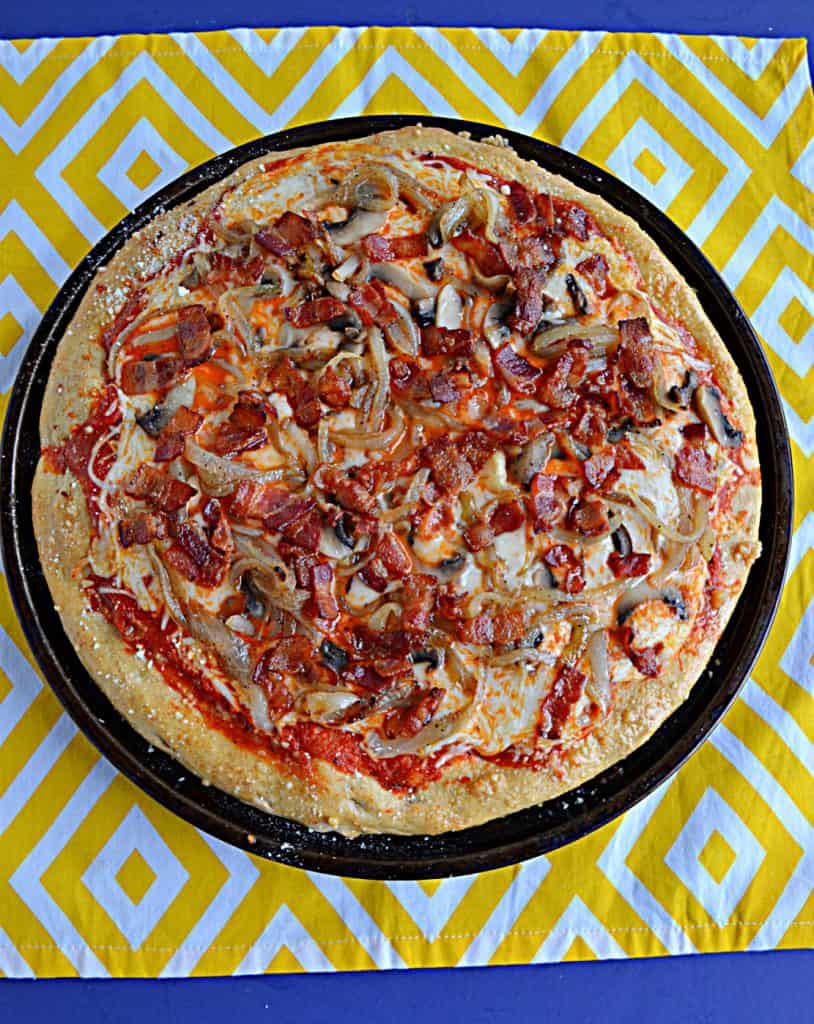 I saw a photo of the Holy Shiitake Pizza and I literally started to drool.   It looked incredibly delicious.  I turned my screen around and showed my husband.   He said wow and asked when we could have that pizza. 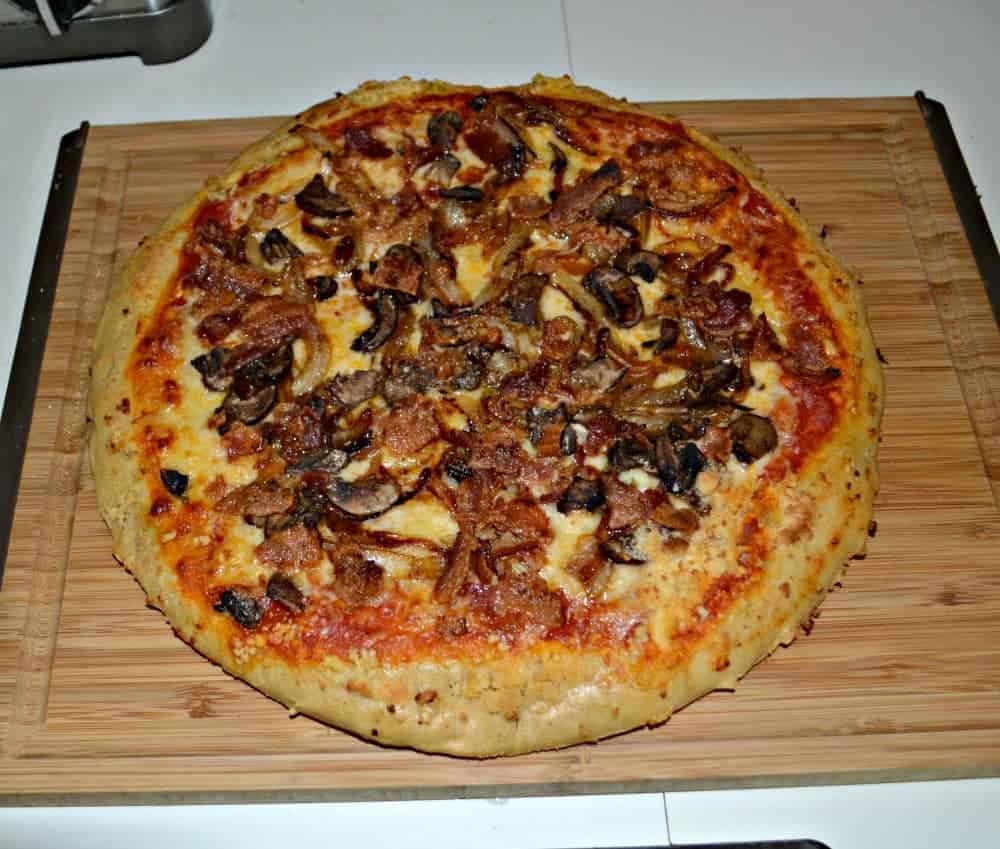 I laughed and asked him if he'd ever heard of Mellow Mushroom Pizza and he said that he had and he actually gone to one.  I asked how it was and he replied that it wasn't anything special.  I told him this was a copycat recipe for that place and he told me his pizza didn't look like that.

I decided to look and see where the nearest Mellow Mushroom is and it turns out it's about 2 hours away.  That's why I've never heard of it before.  There weren't any in my hometown either so this was a new adventure for me.

Ingredients for the Crust:

This crust recipe is similar to others I have made with one major difference.   The crust has molasses in it.  I've never heard of such a thing but I was willing to give it a try.

It turns out that it gives the crust a darker color and just a hint of sweetness.  I wasn't sure if I'd like it or not but I gave it a shot.

To make the crust place the hot water and molasses in a mixing bowl then sprinkle with the yeast.  Let sit for 10 minutes.

In another bowl combine the flour and salt.  Add the flour mixture and the olive oil to the yeast mixture.   Stir until a sticky dough forms.

Cover a surface with flour and knead the dough for 5 minutes adding flour as needed.  The dough will still be sticky.  Roll it into a ball and place it in a lightly greased bowl.  Cover and let sit for 2 hours to double.

Preheat the oven to 450 degrees and divide the dough into two pieces.  Cover one in plastic wrap and put in the freezer for another time.   Press the other half into a pizza pan.

Combine the butter and garlic in a small bowl and brush on the crust.  Sprinkle with half the Parmesan cheese.  Bake the crust for 8 minutes then remove.

Let me tell you.  The smell from the garlic butter on the crust was making my mouth water.   You could seriously just add some mozzarella cheese to this crust and cut it into breadsticks. 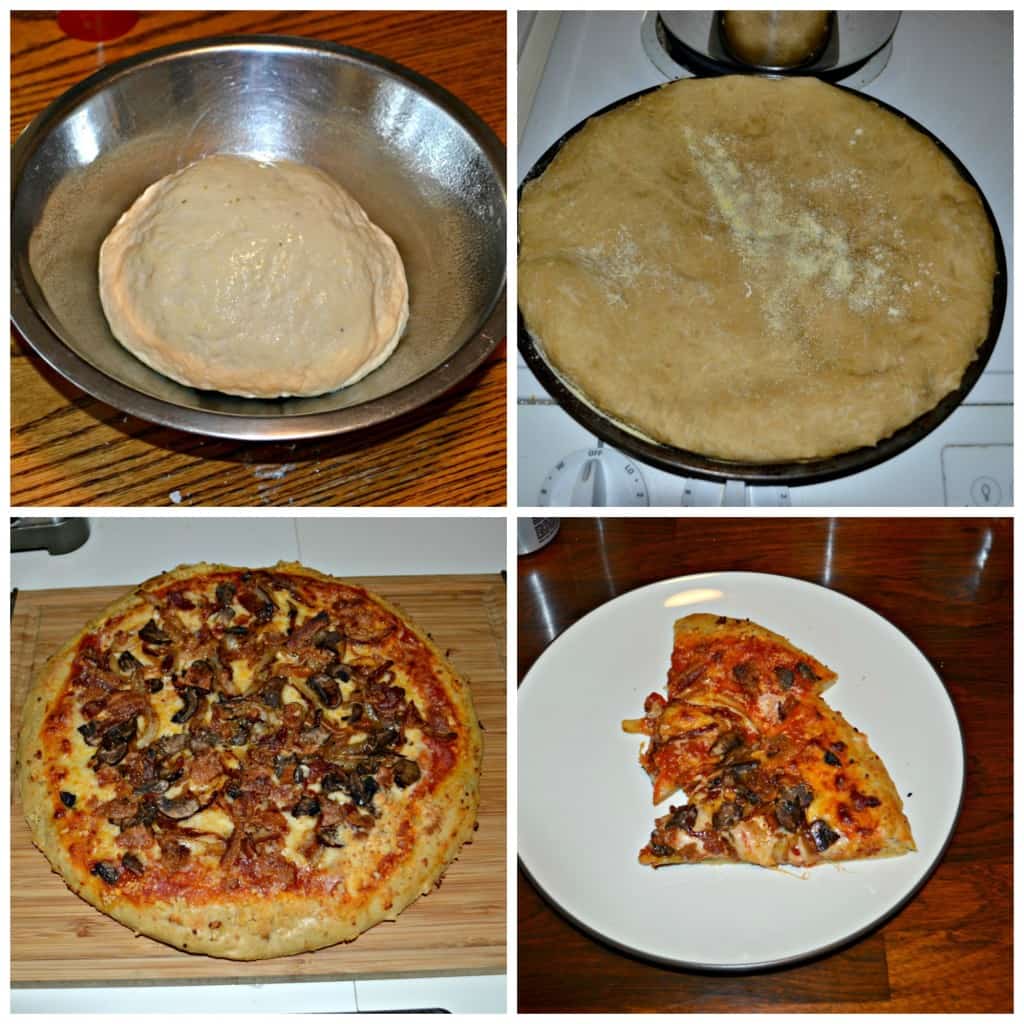 Now let's talk about toppings.   I couldn't just use a jar of sauce on homemade crust (it doesn't happen folks!) so I made a pot of tomato sauce as well.  I actually made THIS buttery tomato sauce which is simple and paired perfectly with this pizza.  Then I topped it off with cheese, sliced mushrooms, caramelized onions, and bacon.   This pizza had it all and both my husband and I loved it.

Ingredients for the Pizza:

To make the toppings start by melting the butter in a skillet and add int he onions and sugar.   Cook for 20 minutes, stirring occasionally, until the onions are caramelized.

Top the pizza with sauce and cheese.  Put mushrooms all over the cheese.  Spread with caramelized onions then sprinkle with crumbled bacon.

Bake for 10 minutes or until the cheese is melted.  Remove from oven and brush with remaining garlic butter on the crust.  Sprinkle the entire pizza with the remaining Parmesan cheese.

The crust was crispy, golden brown, and tasted like Parmesan garlic bread.   The pizza itself was bursting with flavor from the bacon and caramelized onions.   Also, the caramelized onions added their own sweetness along with the crust which was really spectacular.   I recommend everyone try this flavor combination before going with your own toppings.

Do I have to make the homemade crust?

Have to?  No.  Should you?  Yes.   While you can buy store bought pizza dough there is definitely something different and special about this crust.   You could use store bought and still brush it with butter and garlic then sprinkle with Parmesan and it will be good, but it won't be this crust.

Do I have to use homemade sauce?

No.  I've made this pizza probably 5 times and I've used homemade sauce 3 out of the 5 times.  While I prefer to use the homemade sauce and it's definitely better, sometimes I don't have time and use a good store bought marinara sauce.

What type of mushrooms should I use?

Can I make this vegetarian?

Yes!  You can skip the bacon and leave it vegetarian if you want.  I think the bacon adds a little something but it will still be really good! 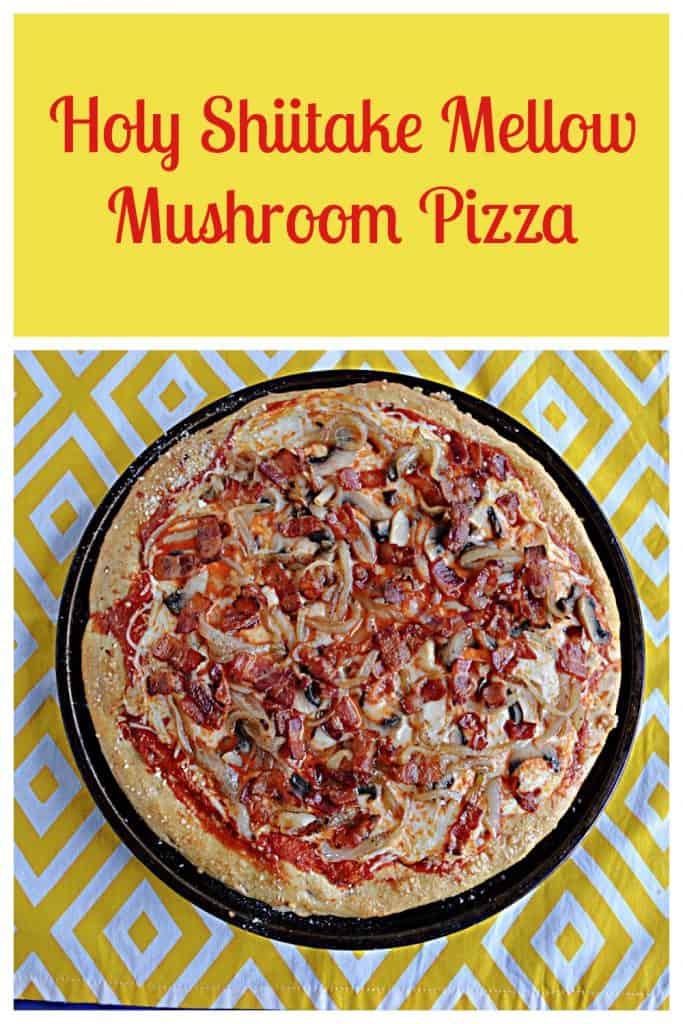 We've had this pizza several times now and it's a winner every single time.  This last time I sauteed the mushrooms before adding them to the pizza and I really liked how that turned out so that's something to think about.

If you make the full recipe and need to freeze the dough first wrap it in plastic wrap.   Then put it in a freezer bag and freeze for up to 6 months.  When ready to thaw place in the refrigerator for 12 hours before using.

If you’ve tried my Holy Shiitake Mellow Mushroom Pizza or any other recipe on Hezzi-D’s Books and Cooks please take a minute to rate the recipe and leave a comment letting me know how you liked it. I love hearing from you! You can FOLLOW ME on:

For the Pizza Toppings:

Recipe adapted from Lark and Lola
**Wrap remaining pizza crust in plastic wrap and place in a freezer bag. Freeze for up to 3 months** 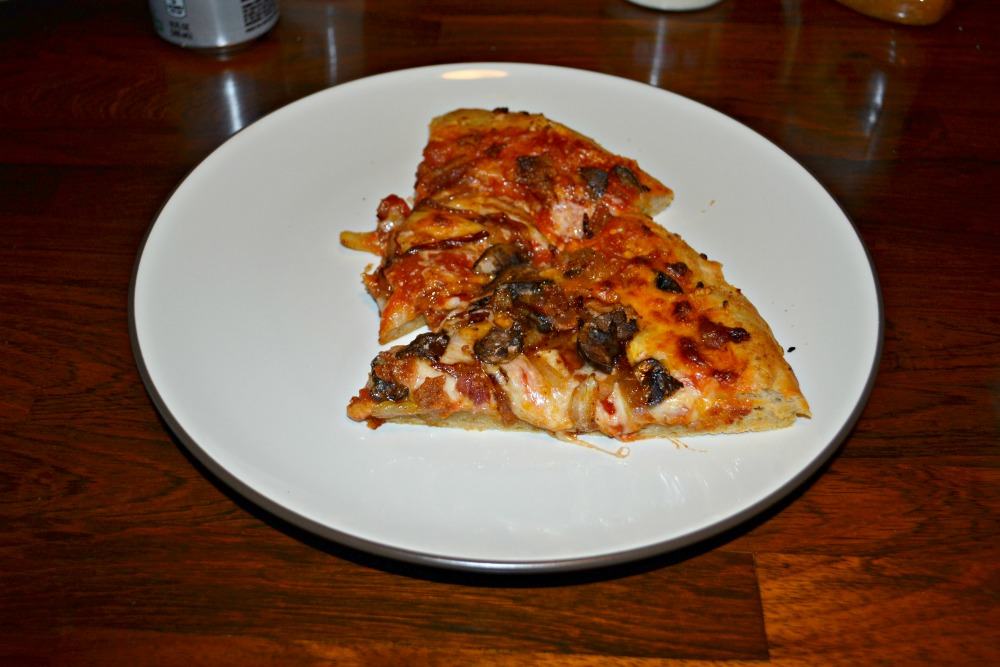