It’s Dr. Kay Scarpetta’s birthday, and she’s about to head to Miami for a vacation with Benton Wesley, her FBI profiler husband, when she notices seven pennies on a wall behind their Cambridge house. Is this a kids’ game? If so, why are all of the coins dated 1981 and so shiny they could be newly minted? Her cellphone rings, and Detective Pete Marino tells her there’s been a homicide five minutes away. A high school music teacher has been shot with uncanny precision as he unloaded groceries from his car. No one has heard or seen a thing.

In this 22nd Scarpetta novel, the master forensic sleuth finds herself in the unsettling pursuit of a serial sniper who leaves no incriminating evidence except fragments of copper. The shots seem impossible, yet they are so perfect they cause instant death. The victims appear to have had nothing in common, and there is no pattern to indicate where the killer will strike next. First New Jersey, then Massachusetts, and then the murky depths off the coast of South Florida, where Scarpetta investigates a shipwreck, looking for answers that only she can discover and analyze. And it is there that she comes face to face with shocking evidence that implicates her techno genius niece, Lucy, Scarpetta’s own flesh and blood.  (-synopsis) 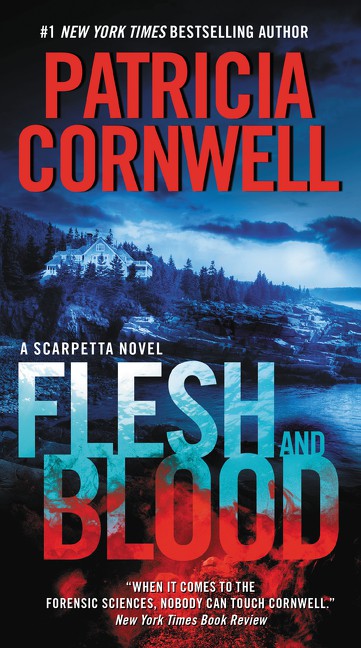 I have been a fan of the Kay Scarpetta series for the last 5 years and have read almost all of the books in the series so I was very excited to read and review the latest book.

The book opens on Dr. Kay Scarpetta's birthday.   Things seem to be going well until Scarpetta finds 7 shiny pennies on her wall.   About the same time her husband, Benton, sees a flash of something close to the house.  A moment later her niece, Lucy, buzzes the house with her helicopter.   Kay begins to get an odd feeling when her phone rings.   It's her friend, Detective Marino and he has some bad news.   There's been a murder and instead of going to Florida, they need her to do the autopsy on the body.

Immediately Scarpetta recognizes the body.  She met the man a year ago and he made some rude comments to her in front of the president.   Upon deeper study, Scarpetta finds that the shot was a perfect one.  It went in at the perfect place and severed the head from the body immediately.  The odd thing is that the bullet was still inside the body and still intact.

Marino is all up in arms as he recognizes the hit.  He's seem two just like it in New Jersey.  Suddenly there is a pattern to the murders and everything is pointing towards Kay Scarpetta.  What's worse, the deeper they dive, the more they find that the killer is someone who is a skilled hacker, skilled marksman, and knows a lot about criminology.   That description sounds just like Lucy.

Something else is bothering Kay and it's not just that people are saying things about Lucy.   She is bothered that Benton isn't answering his phone and he and Lucy seem to know more then they are letting on.   Can Marino, Benton, Lucy, and Scarpetta stay ahead of the serial killer in time to stop him or her from killing them?   It's a race against time and only the most skilled team will succeed.

I thoroughly enjoyed this book.  Dr. Kay Scarpetta doesn't pull any punches and she says what she is thinking.  While she plays by the rules, they can become blurred when it comes to her family.   She is skilled at her job, perhaps the best in the business, and she's working hard to solve these murders, especially when they start hitting close to home.

Benton and Marino are polar opposites.   Where Benton is FBI, calm, cool, and collected, Marino is a police detective that talks too much and says whatever pops into his head.   The two are able to work the case but there are a few points when things become tense.

Lucy is always one of my favorite characters.  Smart, sexy, and skilled at just about everything, Lucy can be dangerous when put into the right situation.   In this novel Lucy is silent and something is obviously bothering her.  There is an edge to her that borders on rage....and lust.  She's stalking the murderer and seems to have inside information that her Aunt Kay has no knowledge of.

Overall this is a fast paced crime novel that has a lot of intricate details, information, and players.  There are several new characters introduced and a few old ones as well.  The characters work well together even when they aren't sharing all the information they have.

If you are a fan of strong woman characters, crime novels, and thrillers, this is a great book!