Sadie Hoffmiller has always liked things to be just so. A place for everything and everything in its place. Order over chaos. And of all things Sadie should be able to control, her own wedding is at the top of the list.

With the big day just three weeks away, Sadie is busily adding the perfect final touches to her wedding plans. But the arrival of a mysterious letter that bears a San Francisco postmark and no return address could change everything. The only person Sadie knows in San Francisco is her older sister, Wendy, whom she hasn't seen or heard from since their mother's funeral nearly fifteen years ago. Sadie has faced off with murderers and crooks in recent years, yet the potential of her sister reentering her life is both overwhelming and frightening. But, as Sadie soon discovers, the letter is just the beginning. Wendy's world turns out to be a place of unanswered questions, twisted truths, and more than one motive for murder.  (-synopsis) 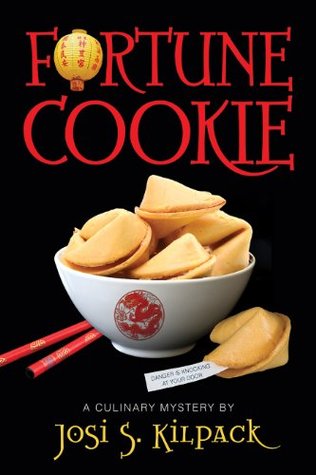 Sadie hasn't seen her sister Wendy in over 15 years and hasn't heard from her in almost 5 years.  So when she receives a letter telling her that her sister is dead she is both shocked and saddened.  Even more shocking is the fact that it is from Wendy's son; a son Sadie didn't know existed.  He asks Sadie to please come to San Francisco to help him go through her things and clean out her apartment.

Not knowing what she will find when she arrives, Sadie hops on a plane with her fiancee Pete and they head to San Fransisco.  When she meets her nephew for the first time she is surprised by the bitterness he has for her.  Wendy was never a good mother to him and he doesn't understand why Sadie and her family never tried to find him or help him during his younger years.  Sadie immediately feels guilty and wishes she had looked into Wendy's claims of having a child.

In addition to the tension with her nephew Ji, Sadie has to deal with Pete reminiscing about his wife who passed away several years ago from cancer.  As it turns out, Pete and his wife spent a lot of time in San Francisco and everything reminds him of her.  As the wedding gets closer, Pete and Sadie seem to be drifting further apart.

Then there are things about Wendy's death that just don't add up.  How did she end up dead in the bathtub?  Why did someone set her apartment on fire weeks after her death but while she was still in there?  Who wanted her dead?   More importantly, with her bipolar disorder and irrational ways, who didn't want her dead?

The longer Sadie stays in San Francisco the more confused she becomes.   Who killed her sister and why?   Does Pete still love her and want to get married?   Why won't Ji let her learn more about him and his family?

This is another great mystery in this series.  There are so many characters in the book who wanted Sadie dead but in the end I didn't guess who the killer really was.  There's also the side stories of meeting her nephew for the first time and also dealing with Pete missing his wife.  This is a fast paced mystery that I read in only a few days.  It kept me interested until the very end.

As if that weren't enough, there's also about 15 recipes in the book that come from the story line.  Since I love food and cooking, this is just an added bonus to this series!

Purchase this book on AMAZON |  BARNES AND NOBLE