I really enjoy cooking challenges because they push me into cooking or baking something I probably wouldn't otherwise try.  I also find them to be a lot of fun because everyone is making similar items and we are all able to share what is working and what isn't.

On the food board that I regularly post on we do recipe swaps twice a month which are a fun way to try new recipes.  This month we got talking about how almost no one has ever made French macarons.  There's almost a dead silence whenever anyone mentions French macarons because if you don't make them properly they won't bake correctly.  Our cooking board decided that we would all try and make French Macarons this month and post about our trials.

I was one of the first to give these a try.  When I first told my husband about them he told me he didn't like those coconut cookies.  I quickly explained that those were macaroons and what I was making were French Macarons.  He had never tried them before so I couldn't wait to make them.  Sadly, my first attempt was a disaster.  I used a recipe from a blog that isn't one I normally read and it didn't go well.  The cookie mixture was too runny and when I took them out of the oven they totally collapsed. 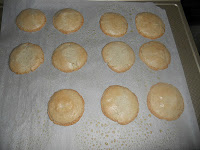 I was frustrated, but I had used almonds that I pulsed myself and thought that might be the cause so the second attempt I used almond meal and I used America's Test Kitchen's recipe.  They have yet to let me down and this time was no exception!  The cookies puffed up nicely in the oven and had beautiful feet.  They were easy to lift off the cookie sheets.  The outside was crisp and the insides were soft and chewy.

I made two batches of the French Macarons; one I left plain and the other I dyed purple.  Inside the cookies I made French buttercream for the plain French Macarons and blackberry ganache for the purple macarons.  They were both delicious.  My husband loved the plain ones and couldn't believe he'd never tried these before.  We had several friends try them and they were both a big hit.  I was in love with the purple ones.  The crisp outside with the sweet and slightly tart blackberry ganache were amazing.  Now that I have a wonderful recipe I can't wait to try different fillings! 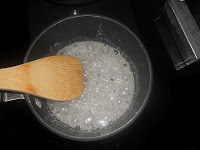 For the blackberry ganache:
1 c. blackberries
6 oz. white chocolate
¼ c. powdered sugar
1. For the buttercream place the egg yolks in the bowl of an electric mixer and beat on  medium speed until slightly thickened and pale yellow, about 5 minutes.
2.  In a small saucepan over medium heat, bring the sugar and corn syrup to a boil, stirring occasionally. Remove from heat. 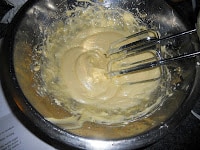 3.  Turn the mixer onto low and slowly pour the hot sugar mixture into the whipped egg yolks being careful not to hit the sides of the bowl.  Once all of the sugar is in the bowl increase the speed to medium high and whip until the mixture is light and fluffy and the bowl is no longer warm, about 8 minutes.

4. Reduce the speed to medium low and add the vanilla and salt. Slowly add in the butter, one piece at a time, until completely incorporated, about 2 minutes. Increase the speed to medium high and beat the buttercream until smooth and silky, about 2 minutes. Place in a bowl and refrigerate until ready to use.
5.  For the blackberry ganache place the blackberries in a food processor and puree.  Pour the mixture into cheesecloth that is over top of a bowl.  Squeeze until all of the liquid from the berries has been squeezed into the bowl. 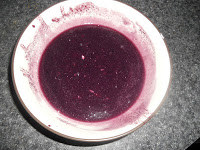 6.  Pour the blackberry juice into a small saucepan and heat until it simmers.  Remove from heat.
7.  Meanwhile, heat the white chocolate in the microwave checking at 30 second intervals until it is completely melted.  Stir the warm blackberry juice into the white chocolate.  Mix until the mixture has come together.  Slowly stir in the powdered sugar.  Put in a bowl and refrigerate until ready to use. 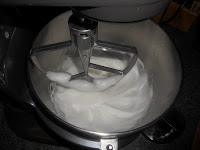 8. For the cookies line 2 baking sheets with parchment paper and then spray the parchment with cooking spray. Fit a pastry bag with a ½-inch plain tip.
9. In a food processor pulse half of the almond flour and powdered sugar together in a food processor until combined, about 30 seconds. Transfer to a medium bowl and repeat with the remaining almond flour and powdered sugar. 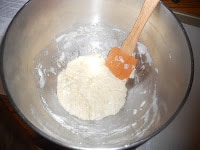 10. In the bowl of a mixer beat the egg whites and cream of tartar together on medium low speed until they are foamy, about 1 minute. Increase the speed to medium high and beat the whites to until they are soft and billowy, about 1 minute.  Slowly beat in the sugar.  Continue to beat the whites until they are glossy and form stiff peaks, about 3 minutes.
11. Gently fold one third of the almond flour mixture into the egg whites, followed by the vanilla. Slowly fold in the remaining almond mixture until a thick, gloppy batter forms. Divide the mixture into two bowls.  Leave one bowl plain and use several drops of purple food coloring in the other batter.  Gently fold in the food coloring. 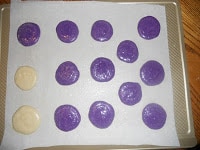 12.  Fill a pastry bag with the plain mixture.  Pipe the batter into 2-inch mounds on the prepared baking sheets, spacing them about 1 inch apart. Gently tap the baking sheets to level the mounds. Use a finger dipped in water to smooth the tops of the cookies. Let the macarons rest at room temperature until the tops are dry and a smooth skin has formed, 1 to 2 hours.  Repeat with the purple cookies. (You may need additional cookie sheets depending on how large yours are-I needed 4)
13. Fifteen minutes before baking preheat the oven to 325 degrees. Bake the cookies, one sheet at a time, until lightly browned, about 20 minutes, rotating the baking sheet halfway through baking. Carefully remove the hot cookies from the parchment paper and place on a wire rack to cool for 1 hour.
14.   Before serving, spread a heaping tablespoon of the buttercream over the bottom of a plain cookie.  Make a sandwich by pressing the bottom of another plain cookie on top of the buttercream.  Do the same thing with the purple cookies using the blackberry ganache. 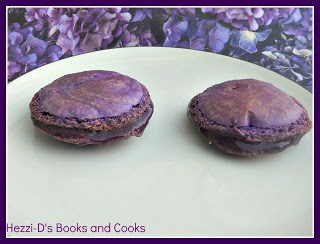 This post linked to:
Sugar Me Up, Sweets for a Saturday, Scrumptious Sunday
Not Baaad Sundays, Sundae Scoop Sundays, Crazy Sweet Tuesdays