I think anyone who has ever eaten at a Chinese restaurant has had the General Tso's chicken.  It has to be one of the most popular dishes on the menu.  I know it has always been my favorite Chinese dish....until my husband turned me on to General Tso's tofu.  However this is all about my quest to find an amazing General Tso's recipe. 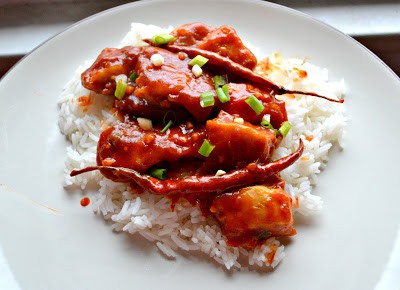 I've tried a handful of recipes in the past and while some are good and some are not, none of them have tasted like the restaurants version.  I had high hopes for a recipe I found in Savuer.  It sounded different then the others I had tried and I couldn't wait to try it.

It smelled spicy and delicious and I was so anxious to try it as I plated it on top of the rice.  It was good, really good actually, but it still wasn't like the versions I've had at restaurants.  The chicken was spicy and tasted really good but it wasn't as sweet as the versions I've had.  After reading the blurb that went along with the recipe I realized that this is the more traditional version of General Tso's and that the excess sugar wasn't added until the recipe came to the United States.  So while I still haven't found that perfect recipe, this one was very tasty and satisfying. 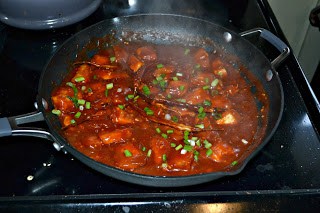 3.  Pour the remaining vegetable oil in a skillet and heat over medium high.  Add half the chicken, frying and stirring until cooked through, about 4 minutes.  Remove to a paper towel lined plate then add the remaining chicken and fry it the same way.

4.  Add the ginger, garlic, and chilies to the same skillet and stir fry for 1 minutes.  Add the sauce and cook for 5 minutes or until the sauce has slightly reduced.  Stir in the sriracha sauce.

5.  Return the chicken to the pan and fry for 2-3 minutes, coating with the sauce.  Remove from heat and stir in sesame oil.  Sprinkle with scallions. 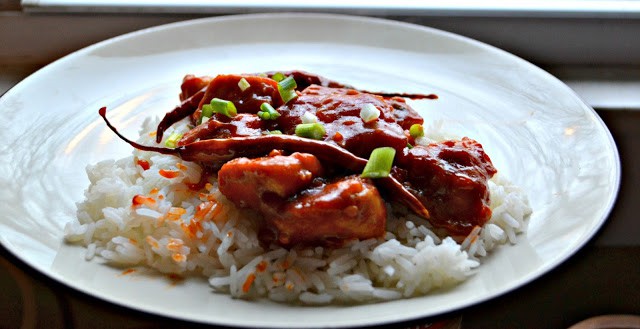