When George first met her, she was an eighteen-year-old college freshman from Sweetgum, Florida. She and George became inseparable in their first fall semester, so George was devastated when he got the news that she had committed suicide over Christmas break. But, as he stood in the living room of the girl's grieving parents, he realized the girl in the photo on their mantelpiece - the one who had committed suicide - was not his girlfriend. Later, he discovered the true identity of the girl he had loved - and of the things she may have done to escape her past.

Now, twenty years later, she's back, and she's telling George that he's the only one who can help her...  (-synopsis) 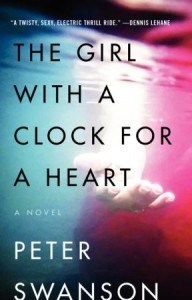 The book begins with a look into the future.  George is creeping around a house looking for a clue.   It's dark outside and he has to use his flashlight to look around.  When's he is just about to give up he finds it.   It's a book and he knows it's what he's been looking for.

The story then goes back several weeks before.  George is having lunch with his on again off again girlfriend, Irene.   While they are enjoying their lunch he notices a familiar face at anohter table.  It's the face of Liana, his college girlfriend that disappeared 20 years ago without a trace.

After excusing himself from the table George goes over and speaks with Liana and finds out it is her.   Liana tells him she needs a favor and they can talk the next day.  He agrees to meet her if for no other reason then to find out what happened all those years ago and where she has been.

While George waits for the next day he flashes back to college and how he and Liana met.  Only in those days she was going by Audrey, not Liana.   He remembers how in love they were and how shocked he was when he found out she committed suicide.  The only problem was, Liana wasn't the one who died.

George isn't sure what to think now that Liana is back in his life under another new name...Jane.  He knows he wants to be near her and he thinks she feels the same way.  Little does he know that Liana is in deep with some bad people and she'll do anything she can to get what she wants.

I found George to be a likeable character.  He wants to help Liana when he sees her again.  He's friends with Irene, his on again off again girlfriend.  He has a good relationship with the people at work.  He's basically just a nice guy.

Liana on the other hand is a mystery.  She's had at least 3 names that George knows of and she's gotten into trouble at least that many times.   Liana seems to be able to explain away everything that's happened but underneath the only person she cares about is herself.

Will George be sucked in to Liana's game?  Will she stay with him this time or will she simply disappear again?

For the most part I enjoyed this book.  It jumps around between the past and the present but it was easy to follow. Whenever George was thinking of the past the text was in italics so it was easy to know when things were taking place.

I read this book quickly because I wanted to know what was going to happen both in the past and the present.  Of course once I found out the entire story of Liana's path I couldn't believe George still wanted to be around her.   I thought she was a bad person looking to get ahead any way she could.

I didn't really understand the title of the book either.  Even when they used the phrase in the book it didn't make much sense to me.  The only thing I could figure is that her heart is a clock because time is always running out for her.

The ending of the book was disappointing.   It ended in a way that things weren't finished.   I like when things are tidied up and I know what happens, not the what if endings so this one was hard for me, especially since I kept reading to figure out what happened.