Both my husband and I enjoy eating vegetarian entrees several times a week and there were so many options to choose from.  After looking around on her blog I decided I wanted to make a baked good this month and I wanted it to be semi-healthy. 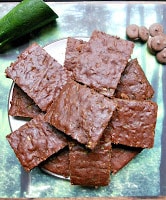 When I saw the Zucchini Brownies I knew that's what I was going to make.  I've seen several blogs posting zucchini brownies recently and they've really peaked my interest.  These brownies were different though because they are vegan, low fat, and don't have any oil/butter in them.  I'll admit, I was skeptical as to how good they could really taste but I was willing to try because I've been counting calories this summer.

Agave nectar is an ingredient I've never used before but I wanted to give it a try as well.  I found that it has a very distinct flavor, one that almost tasted like molasses.  I made the brownies and was excited when the timer went off and the brownies had risen and looked delicious.  I quickly cut them into squares and tasted them.

While they aren't as good as my typical brownies, they were certainly tasty and the fact that they came in at 100 calories and only 2 grams a fat was a huge plus in my book.  There was a flavor in the brownies that I couldn't identify but my husband knew immediately.  I didn't tell him that they were zucchini brownies, only that they were healthier.  He thought that the brownies had a hint of gingerbread in them and I agreed.  I think the agave nectar must have a flavor similar to gingerbread when it is baked.  All in all these are good vegan brownies that are easy to make.

2.  In a large bowl combine the agave nectar, egg substitute, and applesauce.  Add in the zucchini and vanilla then mix well to combine.

3.  In a medium bowl combine the flour, cocoa, cinnamon, and baking soda.  Mix to combine.

5.  Pour the brownies into the prepared pan and bake for 35 minutes or until a toothpick inserted into the middle comes out clean. 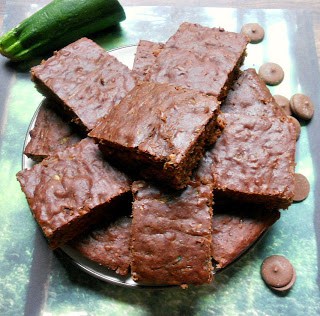